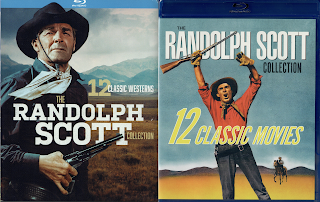 Just in time for Christmas! Twelve classic Randolph Scott westerns in Blu-ray. These have all been released before but this is the first time all twelve have been included in a box set. The key is to watch for a good price on Amazon.

The twelve films included are:

As you can see, this includes three Boetticher/Kennedy collaborations and five Boetticher directed films. This is great material! The quality is generally good although I noticed a frame or two blurred in the corner here and there. These films have not been restored, but rather have been simply transferred to Blu Ray from high-quality existing prints. The boxed set comes with an illustrated Movie Guide to help put the collection in perspective. I enjoyed each and every one of these. Treat yourself to some classic Randy Scott oaters and get this boxed set for yourself at Christmas. 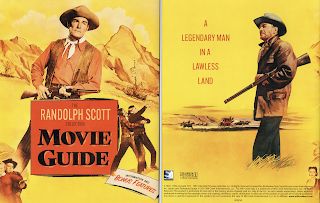 Posted by Thomas McNulty at 8:16 PM