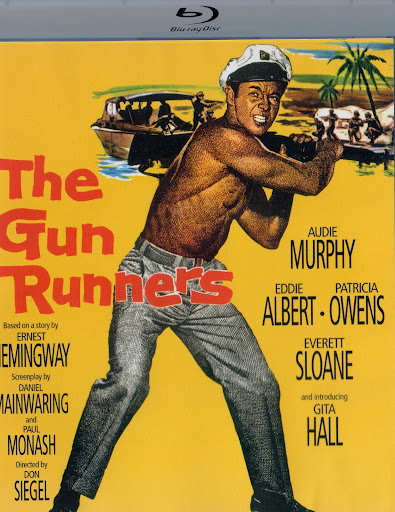 This 1958 black and white noir crime thriller starring Audie Murphy looks great in Blu-ray which is loosely – and I mean loosely – based upon Ernest Hemingway’s 1937 novel, To Have and Have Not. This is the third film version, the first being the classic 1944 version with Bogart and Bacall. The second was The Breaking Point (1950) starring John Garfield. This version was directed by Don Siegel who previously directed Murphy in Duel at Silver Creek in 1952. Siegel would go on to direct such great films as Invasion of the Body Snatchers (1956), Flaming Star (1960), Dirty Harry (1971) and The Shootist (1976), to name a few. Murphy is solid in his role as a reluctant gun runner during the Cuban revolution. The supporting cast includes Eddie Albert and Jack Elam who are at their sinister best. The female enticements were played by Patricia Owens and Gita Hall. I think Murphy only made about nine non-Westerns, and about 39 or 40 feature length Westerns, many of which have yet to be released on either DVD or Blu-ray. In other posts I’ve mentioned my desire to see his acclaimed Westerns for Universal Studios restored and re-released. The Gun Runners is but a modest yet still entertaining entry in Murphy’s filmography, and it proved yet again that he could act in a modern feature, not that any proof was needed. I recommend picking this up if you’re a Murphy DVD/Blu-ray collector like I am. The Gun Runnersmakes for a good Saturday morning matinee, and be sure to include some Irish coffee. Easy on the coffee, heavy on the Irish.