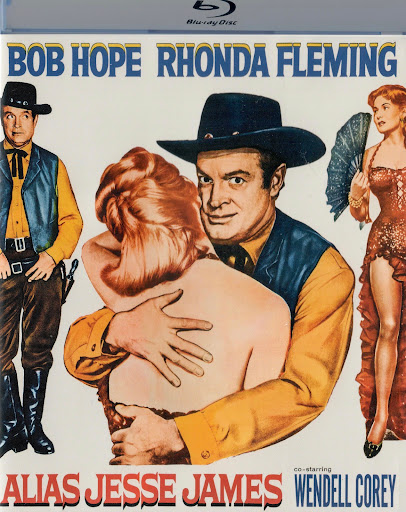 Alias Jesse James is neither a great film, nor an exciting Western. This movie is a cultural oddity, and I can’t imagine what young viewers today would think if they bothered watching it. Bob Hope is far removed from today’s entertainment hot spots, and I can’t imagine a cultural revival such as we’ve seen with Dean Martin, Frank Sinatra and others from the same period. Yet he was internationally known, was revered by millions, was the best host ever on the Academy Awards and produced dazzling and fun-to-watch television specials. He’s a figure of nostalgia who hasn’t really had a retro-discovery…yet. Alias Jesse James was released in 1959, the same year as Rio Bravo with John Wayne and Dean Martin, Ride Lonesome with Randolph Scott, The Last Train from Gun Hill with Kirk Douglas, The Gunfight at Dodge City with Joel McCrea, King of the Wild Stallions with George Montgomery and Yellowstone Kelly with Clint Walker. Those are all good or great films. I think my fascination with Alias Jesse James lies in its nostalgia factor. Bob Hope had long ago mastered the nebbish character which works well enough here, although the film has some serious shortcomings. The casting of Wendell Corey as Jesse James is unfortunate. The script is pedestrian and relies on Hope’s mugging and wide-eyed ineptness to carry the film, and it almost does. Hope was good at what he did, and his “Road” pictures with Bing Crosby are often delightful to watch. The plot here has Hope being mistaken for Jesse James which sets up the obligatory gags and showdowns. My favorite one-liner here happens when an Indian maiden is admiring Hope’s eyes and says, “Your eyes belong on a woman,” and Hope quips, “They usually are.” The stunning Rhonda Fleming is perfect and plays off Hope well. They must have had a grand time filming this one. Fleming never looked bad in a film and the Blu ray clarity highlights her figure and her beauty. This was, of course, from an era when women enjoyed looking beautiful and men openly admired their beauty. The pay-off in Alias Jesse James are the cameo appearances in the concluding showdown. The way to approach this now is from the standpoint of cultural anthropology. Play this film for a room full of twenty-year-olds today and how many will be able to name these stars? Several popular actors show up to partake in the gunfight, all dressed as the character for which they are best known. I think it’s incredible, and watching it again was still thrilling after so many years. Fess Parker, Roy Rogers, Gary Cooper, Hugh O’Brian, Gail Davis, James Arness, Jay Silverheels, Ward Bond, and Bing Crosby all have a few lines or quips at the end. These cameos alone surely helped pack the movie houses. Alias Jesse James works as a parody of Westerns, but who remembers Gail Davis today? It has a certain charm, but I think Hope’s better solo films were The Ghost Breakers (1940), The Lemon Drop Kid (1951), My Favorite Spy (1951) and Son of Paleface (1952, with Roy Rogers). I saw Bob Hope in a stand-up live comedy performance at the Poplar Creek Music Theater in 1978. Barbara Eden was the opening act and she took the stage in a skin tight sequined gown that showed off her ample charms, and she sang her heart out. Hope was great, telling blue but not dirty stories about Dean Martin and Jackie Gleason. Somewhere in my files I have notes on the jokes he told that night. Barbara Eden joined him at the conclusion and they sang and bantered about. It was great fun. 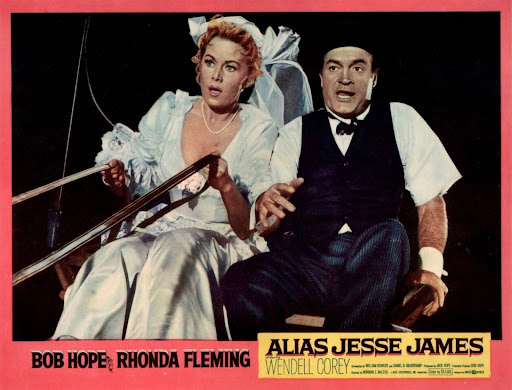 Posted by Thomas McNulty at 3:52 PM