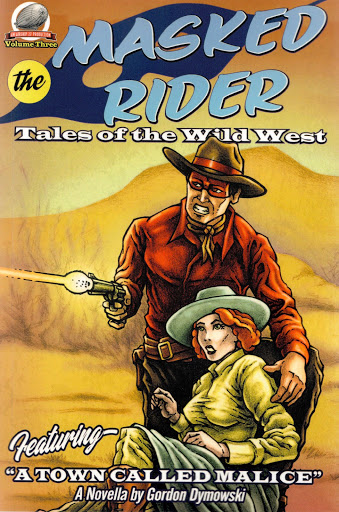 SADDLE UP FOR ADVENTURE! The Wild West has always had its share of larger-than-life heroes; both fictional such as pulpdom’s own Masked Rider and the historical Wyatt Earp and Doc Holiday. In this new collection, we offer up a trio of tales showcasing each: Western writer Thomas McNulty delivers a south of the border yarn with Earp and Doc Holliday on the hunt for a dangerous desperado in a story called “Kings of the Sage.” This is followed by Kevin Findley’s story of the fabled Masked Rider and his Yaqui partner Blue Hawk on the trail of murderous cattle rustlers in a tale called “Green Valley-Red Death.” Finally, in a full-length novella, Gordon Dymowski has the mysterious Masked Rider attempting to solve the murder of an Army Cavalry officer in “A Town Called Malice.” Here then is action and adventure set against a frontier stage true to a time and place that forever left its legacy on a nation; the American Wild West!

Posted by Thomas McNulty at 10:18 PM No comments: