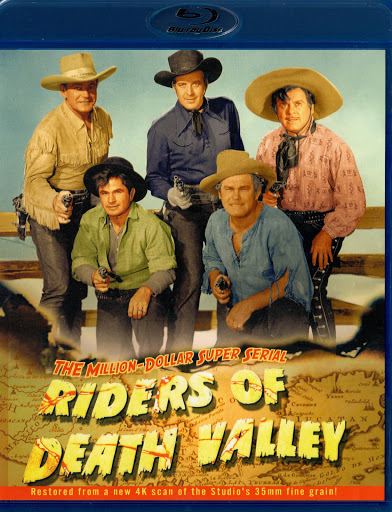 The VCI Entertainment restoration of the 1941 15-chapter “super serial” is an absolute delight to view. This is one of several restorations that caught my eye recently and shouldn’t be missed by fans or historians of classic Western cinema. The stellar cast is incredible – Dick Foran, Buck Jones, Leo Carrillo, Noah Beery, Jr., and Guinn “Big Boy” Williams are the headliners supported by Charles Bickford, Lon Chaney, Jr., Jean Brooks, James Blaine, Monte Blue, Glenn Strange and others. At over 4 hours, all that’s missing is Technicolor. Still, the black and white photography looks great restored to its former glory. Only chapter 6 was lacking a full restoration, although the restoration crew did locate a 16 mm print of chapter 6 which is slightly less pristine than the 35 mm source material used for everything else. The blue-ray package includes two discs for all 15 chapters. Budgeted by Universal at a million dollars, an incredible amount for a long-running serial, and with some location footage completed at Mohave Valley, Arizona, and California locations including the famous Iverson Ranch, Red Rock Canyon State Park, and Death Valley itself, Riders of Death Valley is a solid Western and packed with galloping horses, gunplay, nefarious villains and lots of personality.

The script is better than one might expect from a serial, and the cast are all clearly having fun. The amiable Dick Foran leads the way, sings the title song and generally conducts himself well as he did in every film I’ve seen him in. But it’s the great Buck Jones who held my attention. Riders of Death Valley was released on July 1, 1941and the Japanese attack on Pearl Harbor was only months away. Buck Jones would make nine films after this, all in the span of a year, the last, Dawn on the Great Divide being released on December 18, 1942, just days after his death on November 30th.  Jones was a victim of the Coconut Grove fire in Boston, and his premature death left a void in Western films that has never been filled. Interestingly enough, Buck Jones has never gone out of style. Several of his films have been restored and released on Blu-ray, and he remains a favorite of Western film fans, including myself.

The banter between Dick Foran and Buck Jones is rather enjoyable, and Leo Carrillo checks in with some great one-liners. Charles Bickford and Lon Chaney, Jr. handle the menacing bad guy roles with their practiced professionalism. Noah Beery, Jr., and Guinn “Big Boy” Williams have less to do than the others, but their mere presence adds yet another layer of useful characterization.

I’m an advocate for the ongoing restoration of our Western film heritage, and Riders of Death Valley is a welcome addition to my home library.

Posted by Thomas McNulty at 7:15 PM