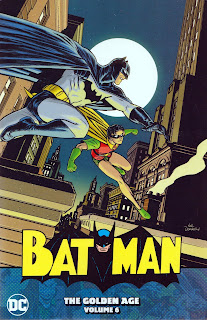 DC Comics has pulled back somewhat on releasing their acclaimed Golden Age and Silver Age trade paperback reprints, which is a shame. I understand the difficulty they cite in selling books, but at the same time their lack of promotion is concerning. I have yet to see any of these compilations advertised in their monthly titles. Someone draft a memo to Dan Didio that sales are normally dependent on advertising and promotion. While I applaud the publication of these books (see my previous posts), DC would benefit from actually advertising their availability. Like, duh. Anyway, this sixth volume of Batman Golden Age tales covers titles from December 1943 through October 1944, smack dab in the middle of World War II. I was, in fact, expecting to see references to Nazi Germany in these tales, but there is no reference made to the war. Instead, we are treated with some incredibly imaginative crime stories. The traditional Batman mythos has been firmly established, and Batman and Robin are depicted in battle against the Joker, the Penguin and other denizens of the underworld. Many of these stories were illustrated by the great Dick Sprang, and as far as I’m concerned it was Sprang’s wild cityscapes and exaggerated profiles that provided Batman’s world with its combination of both gothic-style and campy imagery. Other artists included here are Jack Burnley, Jerry Robinson, Charles Paris and Bob Kane. The writers are predominantly Bill Finger, Don Cameron and others. The credits listed in the book make clear that Bob Kane’s influence was nominal although his name still appears on the splash pages. I have long felt that Dick Sprang, Jack Burnley and Bill Finger deserve the lion’s share of credit for transforming the Batman series into the pop culture icon we know today. The stories are typical of the period, often laced with humor. These stories were created to entertain young readers during a period when current events were increasingly grim. The great cover art for this edition is by Nick Derington. I am optimistic that DC Comics will continue publishing these groundbreaking and historically important reprints. Maybe they’ll even start to advertise them.
Posted by Thomas McNulty at 12:34 PM No comments: