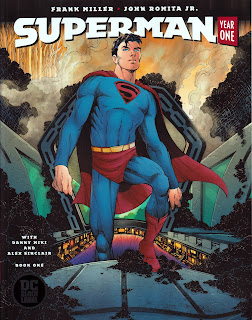 Why does this book exist? For years, fans have been telling executives at DC Comics and Warner Brothers they are tired of reboots, revised origins, and marketing events such as this. Superman: Year One is a rehash of a rehash. We’ve seen it all before, and it was done better before. Why do we need to see this again? My advice is don’t buy it. There has never been any reason to change or revise Siegel and Shuster’s basic premise. It’s been done too many times. I am writing this in English. Do the executives at DC and Warner Brothers understand English? As I’ve stated before, DC Comics has long been conflicted in its approach, choosing to retell and revise Superman’s origin again and again rather than engage Superman with new challenges and fresh villains. The constant revisionism and focus on revised continuity has effectively stalled the series. Nobody cares. Frank Miller has turned in a simple and often dumb script that is brilliantly visualized by artist John Romita, Jr. Make no mistake about what I’m saying here - John Romita, Jr. is a fantastic artist. I wish DC had given him an assignment that was new and fresh and exciting! Instead, we are given this revisionist Pablum by Frank Miller who effectively dumbs-down ma and pa Kent while trying to make Clark Kent relevant. It doesn’t work. And there’s more bad news - there are two more issues coming. Oh boy. Recently, publisher Dan Didio spoke about the sales figures involving reprints. He said, in part: “We do these Facsimile Editions where we reprint older issues...and in some cases these are selling more than the new comics with these characters. People are more interested in buying the stories from 30 or 40 years ago than the contemporary stories, and that’s a failure on us.” Didio went on to acknowledge they need to produce new and exciting stories. The problem is, that’s not what DC is doing. Frankly, this is mind-boggling and incredibly arrogant on Didio’s part. He publicly admits he knows they aren’t handling their books properly, which is a disservice to the characters and their creators, and then junk like Superman: Year One gets approved. Take a look at Batman right now - DC has flooded the market with an endless parade of junk Batman titles, all revisionist crap, and poorly conceived at every level. We have the laughing Batman, the future Batman, the super-duper team-up Batman, the White Knight Batman, Batman in Arkham, and Batman special issue team-ups with characters that should have stayed dead. Whatever happened to the Batman whose appearance struck fear into the hearts of villains and used his detective abilities to solve crimes? He’s gone the way I hope the current executive team at DC is gone, and soon. The lack of cohesion and endless continued storylines have all made Batman and Superman titles confusing, if not incomprehensible. Shame on you, Dan Didio. I don’t like posting negative reviews, but DC comics appears to be run by a group of chattering Cro-Magnon men who are skilled at expelling hot air while stroking a Barbie Doll with adolescent frenzy. I hope they don’t injure themselves.
Posted by Thomas McNulty at 5:04 PM