The Elixir by Robert Nathan 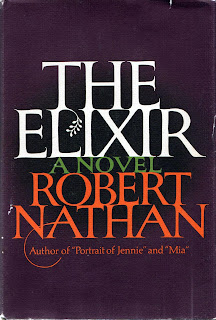 As I’ve mentioned before, Robert Nathan was once a pre-eminent author with Alfred A. Knopf publishers but now most of his books are out of print. Fortunately, the Nathan estate is in the process of making the Nathan library available as eBooks, so if you haven’t read Nathan start there. Try Portrait of Jennie, which I discussed previously. Robert Nathan’s books are an acquired taste, but be warned, once you connect with him you’ll find his prose habit forming. Robert Nathan was an incredible prose stylist. His paragraphs are like works of art themselves. The Elixir is one of his last novels, published in 1971. The Elixir is wonderful for the literary connoisseur, but perhaps ponderous for those less educated. The historical and literary references are constant throughout. The story involves Robert Irwin an American professor on vacation in England who meets a guitar-playing hippie girl at Stonehenge and begins an affair with her. The Elixir is a fantasy, of course, and Nathan’s theme is love. The title is taken from Bernard of Treves, offered as an epigram on the front piece, referencing “Amyranth” a potent elixir that induces a man to see the world spread out before him like a tapestry, both past and present. The narrator’s journey is an exploration of his life as an historian, and he encounters many characters from the past, including Merlin. His guitar-playing lover Anne is really Nimue, the Lady of the Lake, and characters come and go at a rapid pace. Nathan states his intent early, on page 45: “Man has legends and dreams, and they weave one into another, and he is part of them, and they are part of him.” The plot changes dramatically with a plane high-jacking, and here Nathan makes reference to global political events relevant at the time of publication, but then eases us back into England after a brief visit to the Middle East. This section of the book was disconcerting but inclusive and necessary for the narrator Irwin’s understanding of the regional conquering and historical connections. Irwin’s love for Nimue is central to the plot, and naturally their affair must end, because she does belong to the past. Nathan offers us a succinct interpretation of beauty in this passage from page 129: “A woman’s beauty lies less in the arrangement of her features than in the gentleness and vivacity of her air, the mixture of mirth and shyness, the wonder that looks out of her eyes, the modesty and pride to be seen in the curve of her neck and the thrust of her bosom. In short, in that mystery which touches the heart as well as the loins, and causes young men to write rondels and madrigals.” The book is actually quite humorous and less sentimental, although still capable of striking the occasional emotional chord.
Posted by Thomas McNulty at 8:29 AM