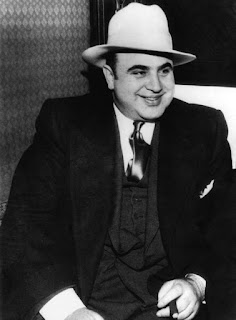 “Where are you from?”
“Chicago.”
“Oh, the gangster city where Al Capone lived.”

That snippet of conversation has occurred in Mexico City, Los Angeles, Deadwood, Nashville and so many other places in my travels. Al Capone did indeed live in Chicago, and he did leave an indelible mark on Chicago history. Chicago cannot escape Al Capone, or John Dillinger or Baby Face Nelson or Dean O’Banion or Bugs Moran. Here there be gangsters.

Chicago’s rich history has a texture unlike so many others, often punctuated by intense acts of violence, from the Fort Dearborn Massacre to the St. Valentine’s Day Massacre to the riots at the 1968 Democratic National Convention, and multiple stunning incidents in between. Chicago is the embodiment of corruption.
My grandfather, Andrew McNulty, encountered Capone once when he worked as conductor on the streetcars for the Chicago Transit Authority. This was in the late 20s or early 30s and prior to Capone’s imprisonment for tax evasion in 1932. My grandfather, or Mac as his family and friends called him, had no time for Capone or the men that surrounded him. Mac told me, “They were all goons and thugs, punks that thought they were tough.” Mac’s distaste for Capone and his henchmen was extended a few years later with some brief encounters with John Dillinger and his roughneck coterie. “Dillinger was full of himself.” Mac told me. He described how common, if not ordinary, riding a streetcar was in those days, even for people with money, because when the weather was good the goons could show-off, make contact with people, and brag a lot. “The streetcars were for everybody,” he said, “until the buses came, and that changed everything.”

According to my grandfather, Capone’s ride was brief, maybe a block, and they got off, and I have never found a similar published statement that Capone used the streetcars. In fact, during this period Capone stayed out of sight and routinely traveled by automobile with guards. Yet my grandfather was no liar, and he clearly encountered Capone. The circumstances will never be known, and Mac is long gone, but one day all those decades past Al Capone got on a streetcar and rode about a block. Capone paid for everyone that got on with him, and that is consistent with published reports about Capone’s behavior. People greeted Capone warmly. “Hello Al!” or “Thanks Al!” were tossed at Capone like verbal bouquets.

Mac’s solitary encounter with Capone was brief, but his henchmen rode the streetcars all the time, and the goons wanted everyone to know whose payroll they were on. Those “punks that thought they were tough” made a lasting impression on Mac, and he recalled them with distaste decades later. There was one career criminal from this period that did leave a slightly favorable impression on my grandfather. This was Joseph Weil, better known as the Yellow Kid, a notorious con-man who once reportedly swindled Benito Mussolini, and lived to tell the tale. “He was a gentleman,” Mac said, “He was the kind of well-dressed and polite man that would lend you a few bucks and never expect to get it back if you were down on your luck. Everybody liked him.”
Capone had a reputation for being flashy, and down-to-earth, even with Mac, who wanted nothing to do with Chicago’s underworld. By comparison, Dillinger “got what he deserved” when he was gunned down by the FBI on July 22, 1934 outside the Biograph Theatre on Lincoln Avenue. Capone was larger-than life; he courted the press, found himself being cheered at baseball games, and cultivated the image of a colorful and well-dressed businessman. Al Capone opened soup kitchens for the needy and made himself into a folk hero. This is a vital fact that demands attention. During the Depression the general feeling was one of distrust toward banking institutions and the government. They had failed the American people. Al Capone not only put people to work, but he fed people. Al Capone’s soup kitchens became the stuff of legend.

Deirdre Bair’s biography, Capone: His Life, Legacy and Legend, published in 2016, is among the better books devoted to Capone’s amazing life. Bair’s biography is an attempt “to look at his public behavior within the context of his personal life, to see how the two might possibly be interrelated, and how the one might have had influence or bearing on the other.” Bair chose to give little attention to such historic events as the St. Valentine’s Day Massacre in favor of interpreting Capone’s life, and so her book is not a useful chronology for those seeking details on the Chicago’s turf war. It does, however, delve deeply into Capone’s public behavior, her stated goal all along. She succeeds and I consider this among the top evaluations on Capone. 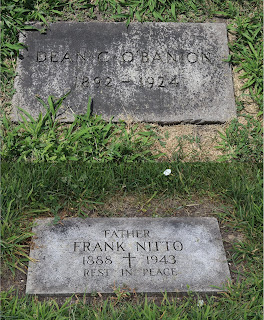 Jonathan Eig’s 2010 best-seller, Get Capone: The Secret Plot That Captured America’s Most Wanted Gangster, offers a fresh perspective on Capone’s involvement in Chicago’s gangland, including a new theory that purports the St. Valentine’s Day Massacre was an insider job orchestrated by the police, and not Capone. Eig’s theory is compelling, if unprovable. I believe Eig’s contention that Capone had nothing to do with the massacre. Read his book.

When Capone died in 1947, his mind ravaged by neurosyphilis, his body was transported to Chicago and interred in Mount Olivet Cemetery. In 1950 his body and those of his father and brother were moved to Mount Carmel Cemetery in suburban Hillside. His gravesite is a popular destination for history buffs. Mount Carmel Cemetery is also home to the remains of Dean O’Banion, yet another Chicago gangster, “Machine Gun” Jack McGurn (aka Vincent DeMora), Frank Nitti, Earl Weiss, and others. It is also the resting place of Julia Buccola Petta, better known as “The Italian Bride” who died at age 29 in 1921. Her body was exhumed six years after her death, and photographed by her mother revealing a lack of decomposition. Her mother had the photo affixed to her grave. Tales of ghostly wanderings have occurred routinely by locals who claim to have seen her spirit. In Chicago, the dead don’t stay in one place long.
In the decades since Capone’s death the corruption and exploitation of vice remain as strong as ever in the Windy City. The goons, thugs and punks are still around, although these days we call them politicians. For Illinoisans holding onto a sliver of hope, you should be heartened by the fact that Illinois has sent more governors to prison than any state in the union.
Posted by Thomas McNulty at 8:03 AM