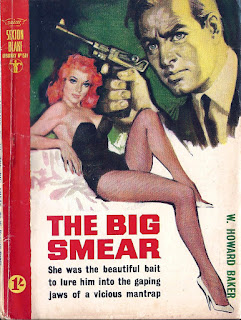 UPDATED 4-27-19!
Keith Chapman has kindly e-mailed a brief remembrance of this title which I’m sharing. It’s important to remember that many of the Sexton Blake novels during this period were collaborative efforts. Here’s what Keith had to say:

"My own recollection of “The Big Smear” is that, like most of the "W. A. Ballinger" and "Peter Saxon" bylined stories of the later Fleetway period, this "W. Howard Baker" title was actually a collaboration at the very least. I recall seeing in Baker's office early versions of such stories by Wilfred McNeilly and others heavily corrected and annotated for the guidance of external  rewrite man George Paul Mann (aka "Arthur Maclean"). Mann would re-submit clean copies for processing by the sub-editor and typesetters. Wilfred McNeilly typescripts were especially distinctive -- he always used a blue typewriter ribbon on a lighter weight of paper. Anyway, whatever the origins of “The Big Smear”, it's pleasing to hear those old SBLs are still giving pleasure to readers!" – Keith Chapman

From November, 1962 comes another digest novel featuring Sexton Blake and written by W. Howard Baker who was also the editor for Fleetway Publications and was instrumental in updating Blake for modern readers. Sexton Blake stories are always fun to read, but I have a soft spot for the material that came out between 1956 thru 1967 or so. The cover on this one was credited to Fratini, and the story is solid W. Howard Baker material all the way. Sexton Blake is virtually unknown here in the USA but he’s a literary folk hero in the UK. Sexton Blake started out as a pastiche of Sherlock Holmes and under W. Howard Baker’s tutelage became a James Bond style hip action hero. These early 1960s adventures were well-written, exciting, and The Big Smear is notable for Baker’s tight plotting, strong sense of time and place, action, and a real nasty villain. When Nicky Deutsch breaks out of jail, he vows to kill Sexton Blake for putting him behind bars. Blake is warned by authorities, but he’s been busy lately handling other cases, and he doesn’t take Deutsch seriously. Big mistake. Deutsch puts in motion a smear campaign and wicked vengeance that nearly destroys Blake’s reputation. Added to the mix is an Irish doll named Delia Murphy and the plot thickens. The suspense is constant and Blake  doesn’t take the threat seriously at first, and he comes to regret that decision quickly. Fairly typical of the period, The Big Smear is tight and breezy. Nicky Deutsch is a nasty psychopath, and Blake has to work extra hard to extricate himself from the mess and stay alive. I’ve read several Sexton Blake novels more than once because I find the prose refreshing. There are multiple websites devoted to the character. Elsewhere on this blog you can find an interview with Keith Chapman who worked at Fleetway. CLICK here to Read theINTERVIEW. 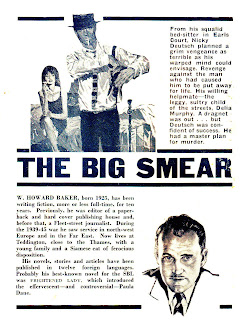 Posted by Thomas McNulty at 9:08 AM No comments: 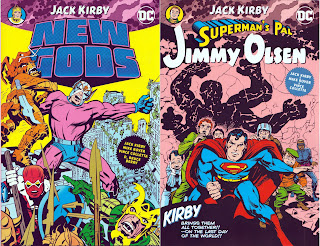 The DC Comics full color trade paperback collections offer some of Jack Kirby’s best work for DC, specifically New Gods. The recently released Superman’s Pal Jimmy Olsen is also a welcome addition. New Gods collects all eleven of Kirby’s groundbreaking series along with his two later stories which completed the sequence. New Gods is Jack Kirby at his best. His imagination is in full bloom, his panels jump off the page, and the traditional coloring is vibrant. Kirby’s concept of the Fourth World was under-appreciated at the time, but has grown in stature among fans and critics since.  DC is wise in releasing this material, although I see little advertising for these books. They retail at $29.99 and can be found discounted at Amazon. Orion of New Genesis and Darkseid of Apokolips are brilliantly realized, and while Kirby wasn’t the best scriptwriter, he makes up for it with explosive artwork. Kirby’s New Gods is stunning to look at. In retrospect, one wonders how his previous employer, Marvel Comics, could have bungled the relationship thus encouraging Kirby to work for DC. Indeed, DC didn’t exactly nurture a great relationship, as is evident in the Jimmy Olsen issues. DC acknowledges in this edition that Neal Adams redrew Superman for Jimmy Olson # 142 and that Murphy Anderson had a hand in some of the cover artwork. In fact, it is public knowledge that Murphy Anderson redrew both Superman and Olson’s faces for all of Kirby’s issues, and that Al Plastino did some touch up work as well. Inking chores were handled by Vince Colletta and Mike Royer. This creates a visual anomaly among the Jimmy Olson stories. Kirby and Anderson had two distinctive styles, and the morphing is evident. This edition includes some of Kirby’s pencil sketches which clearly show that DC overreacted because Superman’s features are fine. Kirby did struggle with the S-emblem. No matter, Kirby’s stint on Superman’s Pal Jimmy Olsen was memorable, but brief. All fifteen of Kirby’s Olson stories are reprinted. My personal favorite is # 142 which introduced the vampire Count Dragorin. I consider the Olson sequences a minor contribution, while New Gods remains a modern classic. DC has also reprinted Kirby’s Mister Miracle and The Demon. Recommended.
Posted by Thomas McNulty at 8:33 AM No comments:

Writers of the Future 35 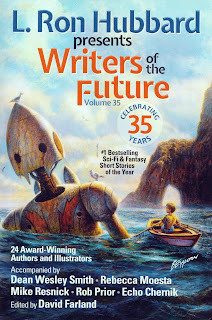 Graced with a beautiful cover by Bob Eggleton, WOTF 35 continues the landmark tradition of stunning artwork complementing the year’s winning entries in this highly-acclaimed contest. I read this anthology every year and I have never been disappointed. Commencing with an introduction by David Farland and another by Echo Chernik, the first story is Untrained Luck by Elise Stephens and illustrated by Aliya Chen; a riveting tale that sets the creative bar very high. The First Warden by Kai Wolden and illustrated by Alexander Gustafson is up next, and this excellent story had me glued to the book. The Damned Voyage by John Haas and illustrated by Allen Morris reaffirmed my faith in this anthology. At this point we are treated to an essay and a story by L. Ron Hubbard. The story, The Idealist, is illustrated by Brian C. Hailes. Hubbard’s fast-paced prose is always a delight to read.

The next sequence of stories are all vivid and exciting. Thanatos Drive by Andrew Dykstal and illustrated by Qianjiao Ma; A Harvest of Astronauts by Kyle Kirrin and illustrated by Sam Kemp; and Super-Duper Moongirl and the Amazing Moon Dawdler by Wulf Moon and illustrated by Alice Wang. This section is rounded out by Tips for Embryonic Pros by Mike Resnick.

This brings us to Dean Wesley Smith’s Lost Robot which was inspired by Bob Eggleton’s One of Our Robots Is Missing cover artwork. Smith’s tale is great and this combination sums up the quality and the creative inspiration evident in every annual edition of the Writers and Illustrators of the Future anthology. The next three stories are equally as exciting and refreshing as everything that came before: Are You the Life of the Party? by Mica Scotti Kole and illustrated by Josh Pemberton; Release from Service by Rustin Lovewell illustrated by Emerson Rabbitt; and Dark Equations of the Heart by David Cleden illustrated by Vytautas Vasiliauskas.

The final section offers Advice for Artists by Rob Prior, and a wonderful tale called Yellow Submarine by Rebecca Moesta and illustrated by David Furnal. The final stories are An Itch by Christopher Baker illustrated by Jennifer Ober; Dirt Road Magic by Carrie Callahan and illustrated by Yingying Jiang; A Certain Slant of Light by Preston Dennett and illustrated by Christine Rhee. I really enjoy the diversity of these stories, and each corresponding piece of artwork was a perfect match. Overall, this is the primary Science-Fiction and Fantasy anthology I purchase.
Also, Looking for some new, relevant science fiction and fantasy? Here’s a link to an article on the newest releases from the past winners and some current judges of the prestigious Writers of the Future contest. Many of the winners go on to publish professionally. I read this anthology every year. This is great material. Lots of choices here. CLICK ON THE LINK.
Posted by Thomas McNulty at 9:03 AM No comments: