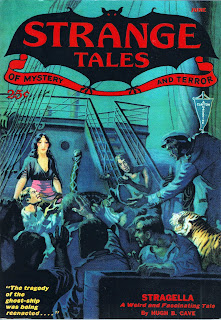 I was pleased to finally snag a copy of the Wildside Press facsimile reprint of June 1932 issue of Strange Tales, a quintessential pulp collector’s item. I saw the original issue once at a convention years ago but the price was way beyond my budget. I’m in favor of facsimile reprints or anthology reprints of the pulp era stories. These original magazines pages are brown now, and often hardly worth collecting because the pages are too brittle to touch. A Wildside Press copy is fine by me. This issue includes some phenomenal talent – High B. Cave, Clark Ashton Smith, Paul Ernst, Henry Whitehead, August W. Derleth and Robert E. Howard. Strange Tales lasted 7 issues and was created to compete with the best-selling pulp magazine, Weird Tales. Harry Bates was the editor, best known today as author of the science fiction story “Farewell to the Master” which was filmed later as The Day the Earth Stood Still. This issue features a letters page which includes a letter from Julius Schwartz, later the famed editor at DC Comics during the Silver Age. I met Schwartz several times and my conversations with him were always about the pulp era. The cover art is by H. W. Wesso. Okay, enough trivia. “Stragella” by Hugh B. Cave is a great creepy tale, followed by “Dread Exile” by Paul Ernst and “The Great Circle” by Henry S. Whitehead. Those three tales set the tone. Then we have “The House in the Magnolia’s” by August Derleth, and you can never go wrong with an August Derleth tale. “People of the Dark” by Robert E. Howard is a classic, which is followed by two moderate tales: “The Emergency Call” by Marion Brandon, and “The Golden Patio” by Aubrey Feist. Then we’re treated to “The Nameless Offspring” by Clark Ashton Smith, another classic. These are perfect stories for Halloween or just any old dark and stormy night.
Posted by Thomas McNulty at 7:03 AM