Wicked We Love by Mordecai Richler 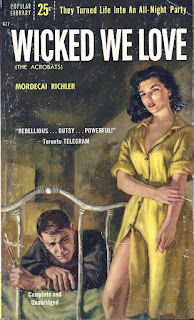 Originally published under the title The Acrobats in 1954, the Popular Library paperback a year later sold for 25 cents as Wicked We Love. The book initially received modest press attention and was compared to Ernest Hemingway’s “Lost Generation” novel, The Sun Also Rises. Interestingly enough, I consider The Sun Also Rises a lesser work for Hemingway, and Wicked We Love does a better job of documenting and exploiting the bohemian sub-culture in those halcyon years prior to Spain’s Civil War. Wicked We Love is well-written and engaging but it’s still a soap opera. Wicked We Love is also not a pleasant book to read. Like some of the best fiction that emerged after WW2, this tale about young thrill seekers is honest and brutal. Mordecai Richler went on to write The Apprenticeship of Duddy Kravitz (1959). Richler was Canadian and received many awards and recognitions, wrote a few screenplays, and several other works of fiction, children’s books and non-fiction. Wicked We Love is well known among vintage paperback collectors, and copies are not difficult to find. Although the writing is good, I found the book somewhat disjointed. Richler breaks the story into four sections of varying length. None of the characters were appealing, including the protagonist, Andre Bennett. Set in Valencia, Bennett has fled America feeling guilty about a girl he jilted, and while in Spain he rubs elbows with the “lost and the damned” and soon connects with Toni, a hot little cabaret girl. Toni’s friend and lover is Kraus, a typical sadistic German. Andre takes up painting, and as his circle of friends expands, the melodrama heats up with plots and insinuations and lustful motivations. By the conclusion, I was rather tired of the whole lot of them, but again, Richler was a good writer and he manages to string together an ending that is perfunctory and unsettling, which I’m sure he intended.
Posted by Thomas McNulty at 9:48 AM