Winter in April by Robert Nathan 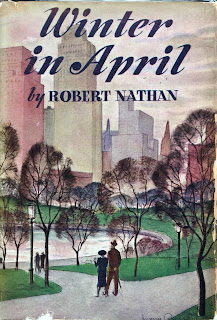 This 1938 novel by Robert Nathan is another of his delightful books, quite beautifully written, and touching. This is a story told by scholar Henry Pennifer who recounts with love and humor the events of his granddaughter coming to grips with her womanhood, and how she fell in love one season with Henry’s assistant, a young man named Eric. The story is told in the first person, with Henry speaking. The writing is luminescent. All of Robert Nathan’s writing benefits from his uncanny ability to write clean, yet startling images with grace and dignity. There is far more humor here than in Portrait of Jennie or Long After Summer, my other favorites. In fact, the intoxication scene in chapter nine is a tour de force that highlight’s Nathan’s great skill. Near the conclusion, Nathan strikes upon a fundamental modern problem that is just as relevant today as when he penned these words in 1938: “It is no longer necessary to read and write in order to communicate with others. The air itself is full of voices, waves of sound bearing us advertisements, news items, arguments, and music; one has only to turn a knob, to hear whatever one likes. Since there is so much to interest and amuse us, we are not likely to ask ourselves how it is done. A circus is not the best place to discuss grammar and syntax.” Although this is a lighthearted novel, Nathan touches upon some meaningful themes, i.e., the loss of relationships, people struggling to communicate or to find a sense of completeness. Perhaps the key here can be found in the musings of Henry Pennifer: “Kindness: what a strange word to find on anybody’s lips these days. It is like a style in clothes which is no longer worn, or like a musty language no longer spoken.” His granddaughter’s stress at choosing a dress for an upcoming social event is masterfully handled, with Pennifer eventually providing a slapstick resolution. Of course the international backdrop is touched upon in passing, namely the Spanish Civil War which is relevant to Eric. There are no fantasy elements here, but rather a dry humor and sensitive understanding of human nature.  His occasional snarky comment is delivered with such finesse that I remain awed by the delivery: “God, after all, is not a mystery to the church; which is why zoologists are regular church-goers.” Nathan followed Winter in April with Portrait of Jennie in 1940. He published over 50 volumes before his passing in 1985. Also recommended: But Gently Day, The River Journey, The Train in the Meadow, So Love Returns, The Color of Evening, The Wilderness Stone, and The Elixir. Many of his titles are available for Kindle. I am a fan and collector of Nathan’s books and I’ll cover other titles in the future.

Posted by Thomas McNulty at 8:17 AM