Guns of the Timberlands by Louis L’Amour

There are Westerns, and there are Westerns. I am both a Zane Grey fan and collector, and a Louis L’Amour fan and collector. Don’t be surprised by that. Grey may have been the first truly popular writer of Westerns, but Louis L’Amour took the Western to an unprecedented level of popularity. I read an on-line bit by the late critic-historian Jon Tuska wherein he questioned L’Amour’s effect on the American imagination, all while criticizing the simplicity of L’Amour’s plots. Tuska was a Zane Grey fan, for which I give him points, but he was wrong about L’Amour. So I’ll state this plainly: Zane Grey and Louis L’Amour are responsible, in equal measures, for popularizing, helping define, and keeping alive the Western genre. Louis L’Amour had an ongoing positive effect on the public’s imagination in relation to Westerns, and continues to both inspire and entertain us. Now that I’ve said it, you can stomp about and snort fire all you want if you disagree. I reckon I don’t care.

Guns of the Timberland was first published in West magazine under the pseudonym Jim Mayo in September, 1950. Guns of the Timberlands was then published in hardcover in 1955 by Jason Press, and I own that first edition, (my copy is signed by L’Amour). Bantam Books began publishing paperback editions that same year, and Guns of the Timberlands has never gone out of print. This was Bantam’s first Louis L’Amour paperback. Unfortunately, Bantam Books has begun eliminating those beautiful painted covers that graced L’Amour’s canon for so many decades, opting instead to replace them with the usual bland, photo-shopped picture, as seen below by the scan of the current edition. Guns of the Timberlands is one of those titles that I buy when I encounter the older paperback copies in good shape. I don’t exactly know how many I have. Maybe six. Maybe seven. Here’s the thing about collectors you should understand – we don’t need all of those extra copies, but we have to have them. 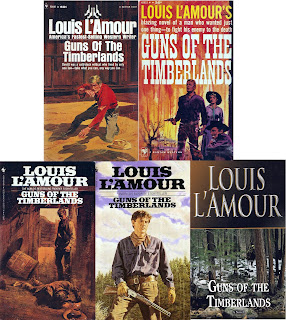 The critics missed the point about the simplistic plots. Western plots are often simplistic, but L’Amour’s writing talent was far above the clichéd pack, while his characters are complicated. Those complicated characters, combined with L’Amour’s talent as a great storyteller, elevated most of his novels above the others. L’Amour understood his characters, and his own vast youthful experiences had prepared him to write with conviction about these trailblazing frontiersmen and gunfighters.

One of the reasons why I favor Guns of the Timberlands as a great Western story is nostalgia. This was the first L’Amour Western that I read, not realizing it was one of the first full length Westerns he published. Guns of the Timberlands is archetypical with a premise that involves a rancher fighting against an unscrupulous businessman who wants to log his land for profit. The main character, Clay Bell, is a wise and tough rancher, fast with a gun when he needs to be. Clay Bell provides the moral centerpiece to the tale. The other elements would become requisite fare for L’Amour: a badass named Jud Devitt who loses control of his devious plan thanks to Clay Bell; a love interest, and a knock-down fistfight. L’Amour wrote the best fistfight scenes.

Guns of the Timberlands serves as a great introduction for new readers interested in exploring the Western genre. By no means am I saying it’s a masterpiece, but it’s damn good. Other L’Amour favorites of mine include Crossfire Trail (1954), Silver Canyon (1957), The Tall Stranger (1957), Flint (1960), High Lonesome (1962), and Under the Sweetwater Rim (1971). Of course there are many more.

Posted by Thomas McNulty at 9:21 AM