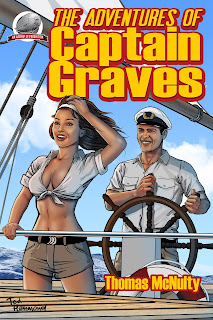 “Last night I dreamed that Victoria Ransom’s corpse floated to the surface of the South China Sea, her mouth clotted with kelp, her eyes shining like two silver coins. She was emotionless and unrepentant; a trinket the sea had given back for some beachcomber to find on a fog-shrouded morn. Her sheer nightgown clung to her obscenely, outlining every once delectable curve.”


In 1936 Captain Elliot Graves took his schooner, The Reaper’s Scythe, to the South China Sea. With a contract to obtain marine specimens for New York’s Natural History Museum, and a reputation for trouble, Graves and his crew are caught up in a treasure hunt on the island of Sumtoa that will test their mettle and pit them against a dangerous adversary. This whirlwind adventure is available now on Amazon!

Here's what people are saying about the book-

PETER BRANDVOLD, Best-Selling Western author: "…a terrific old-fashioned pulp novel by Thomas McNulty, which reads just like something I might have found in Argosy or one of the other great adventure pulps of yesteryear. A real page-turner with good-lookin' wimmen and a great two-fisted hero. Highly recommended! …It’s better than the old pulps! Great premise, terrific two-fisted action!...

ROB COSTELLO, Amazon Reviewer: "Beautiful women, rugged men, tall ships, and treasures. McNulty paints a tale of intrigue and adventure in the South Seas. Modern pulp fiction doesn't get much better than this. I had a hard time putting this one down."

JOHN, Amazon Reviewer: "Tom McNulty has once again proven himself a master of this high-octane action writing."

Posted by Thomas McNulty at 7:44 AM