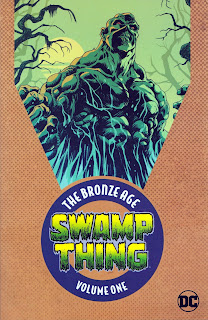 Swamp Thing first appeared in House of Secrets in the summer of 1971. Created by writer Len Wein with artist Bernie Wrightson, the first issue of Swamp Thing appeared in the autumn of the following year and together Wein and Wrightson had created the best horror comic in DCs long history. The Wein and Wrightson collaboration lasted ten issues and then Nestor Redondo drew the next three issues. That initial run of the Swamp Thing comic book would run 24 issues but those first thirteen issues are the ones that count. After that, other editors, writers and artists would tackle the muck-encrusted monstrosity, make changes to the origin, and generally bugger-up a premise that didn’t need changing. Even later, when Alan Moore penned the series – and he was very good – unnecessary changes continued to be the standard operating method. Go back and read those first stories by the late great Len Wein and Bernie Wrightson and Nestor Redondo, and you’ll no doubt agree as to their value. I’ve always been a Swamp Thing fan, and I even interviewed actor Dick Durock, the actor who played Swamp Thing in the films and on television, and that magazine article I wrote is one of my favorites. Dick Durock was cool and Swamp Thing is cool. This compilation collects all of the Wein and Wrightson/Redondo issues and is part of DCs outstanding dedication to quality reprints of their famous titles. This, at last, they have done right. The stories are reprinted in their entirety, in full color, and with the covers reproduced as well. This is Wein and Wrightson and Swamp Thing at their best. The weirdness factor ramps up quickly, and serves as a reminder that Swamp Thing was first and foremost a horror comic with science fiction elements. Later writers and artists forgot or ignored that crucial point. Yes, there were some excellent Swamp Thing issues later on, but this trade paperback gives readers the quintessential tales that defined the character. Mark it as Must-Have.
Posted by Thomas McNulty at 9:59 AM