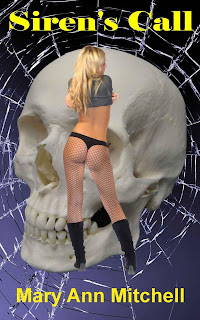 Siren’s Call is about a stripper named Sirena who happens to be a serial killer. She’s hot and sexy and suffered abuse as a child and that’s what flipped the wrong switch that puts her on the road to murder. The story moves briskly and involves her friends at the strip club called Silky Femmes. You’ll meet Chrissie and Treyce and Ross, and later a few more. Ross the bartender is quite fond of Sirena without knowing anything about her. One circumstance leads to another shortly after Sirena kills a pick-up named Duncan. Ross become suspicious of Sirena after Duncan never returns home, and someone naturally comes looking for him. The set-up is typical of a thriller of this type, but Mitchell keeps it lively. The graphic descriptions of Sirena cutting up the bodies are appropriately brief, but be warned there’s a dash of necrophilia here. Siren’s Call is a solid thriller and available for Kindle. Mary Ann Mitchell previously had published several top-flight vampire novels with Leisure Books. All of these are now available as e-books as well. Cathedral of Vampires, Ambrosial Flesh and Sips of Blood are all recommended. I haven’t read everything that Mitchell has published, but when I do read one of her stories I’ve always enjoyed them. The Siren’s Call enticing cover should spice up your Kindle, and Mitchell’s prose will keep you flipping the pages.
Posted by Thomas McNulty at 7:35 AM