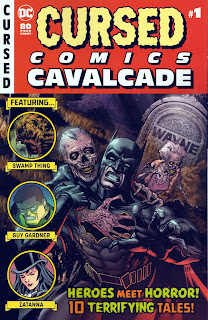 Fresh on the racks from DC Comics is Cursed Comics Cavalcade # 1 featuring 10 terrifying tales for Halloween. With a cover design and artwork intentionally mimicking the historic 1950s horror comic books, Cursed Comics Cavalcade # 1 is something of an anomaly in DCs roundup. I was startled to learn they were even attempting such a book, but I’m glad they did. With a gruesome cover by Doug Mahnke and starring Swamp Thing, Guy Gardner, Zatanna, Batman, Superman, Black Lightning, Green Arrow, and others, Cursed Comics Cavalcade # 1 offers up a macabre series of chilling tales for Halloween. The diverse artistic styles mesh perfectly with each other without seeming obtrusive. I think my favorites are the Swamp Thing tale by Tim Seely and Kyle Hotz, followed by Gary Dauberman and Ricardo Federici’s Batman tale and Michael Moreci and Felipe Watanabe and Jonas Trindade’s Green Arrow Story. These stories are a tad more explicit than you normally find in a DC Comic, and DC marketed this book as “the most terrifying, most shocking and most horrific comic that DC Comics has ever published!” That bold statement is nearly proven on every page, although still shy of the shock value found in 1950s era classics like Tales from the Crypt or The Vault of Horror. This title, in conjunction with DCs recently released Swamp Thing Halloween Horror Giant # 1, might help usher in a new era of monthly horror titles – if we’re lucky.
Posted by Thomas McNulty at 9:27 AM