Portrait of Jennie by Robert Nathan

Robert Nathan’s prose has such an emotional texture that I find appealing, that all of these years later I sometimes return to this book simply to read that opening chapter to discover Jennie yet again, slipping through time. Part of a lost America is here, and certainly a bygone Central Park.

“In front of me, the spaced, even rows of lights shone yellow in the shadowy air; I heard the crisp sound of my own footsteps on the pavement; and behind me the hiss and whisper of traffic turned homeward at the end of day. The city sounds were muted and far away, they seemed to come from another time, from somewhere in the past, like the sound of summer, like bees in a meadow long ago. I walked on, as though through the quiet arches of a dream. My body seemed light, without weight, made up of evening air.”

Published in 1940 to immediate acclaim, Portrait of Jennie is Nathan’s best known novel with a legacy that is complemented by the 1948 film starring Joseph Cotton and Jennifer Jones. The film is generally faithful to the novel, and the modest differences never detract from the story’s resonance. This novel is a masterpiece of fantasy and romance. The measured prose, the plight of starving artist Eben Adams, and the ethereal Jennie all combine into a novel of power and substance. Portrait of Jennie is a ghost story and a love story, perhaps the best of its kind. Eben doesn’t realize that Jennie is a ghost, but as he encounters her and falls in love with her, his life is changed irrevocably. Nathan is tackling some heavy themes; grief and loss and love all at once, and because he is such a gifted writer, readers will find it difficult to escape the emotional content found in the novel’s 18 chapters. This was the novel that led me to Nathan’s other brilliant work, specifically Long After Summer, Stonecliff and Winter in April. There are many others, too. I have never read a book by Robert Nathan that I did not enjoy at some level. Film buffs will benefit by a viewing of the film which gives us, unintentionally, a taste of post-war New York. Many of Nathan’s books are available for Kindle. NOTE: The portrait of Jennie (Jennifer Jones) used in the film was painted by artist  Robert Brackman and is reproduced as the cover of the Kindle version of Nathan’s novel. 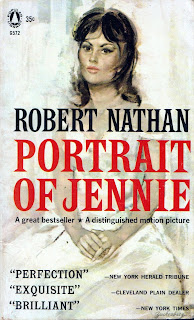 Posted by Thomas McNulty at 9:28 AM No comments:

The Hound of the Baskervilles by Sir Arthur Conan Doyle 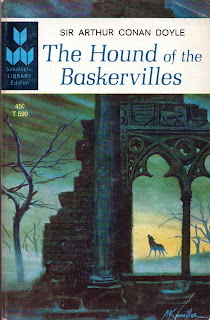 Sherlock Holmes has never lost his popularity. I read the complete Sherlock Holmes tales by the time I was twelve. I re-read them in my teens and I re-read them still today. Holmes is Arthur Conan Doyle’s greatest creation. He lives forever in the original stories, movies, television shows and comic books. There is currently an active cottage market of “new” Holmes tales by a wide-variety of authors and publishers. Of the novels, I think The Hound of the Baskervilles is my favorite, although it’s not the best. A Study in Scarlet is probably the best, judged strictly by academic and literary guidelines, but they’re all good, often great. There are four novels and fifty-six original stories. I like The Hound of the Baskervilles because of its gothic elements, and the energy as the story unfolds. It’s a short, brisk novel, actually written and published after Doyle had killed Holmes off in one of the stories. The Hound of the Baskervilles filled the demand for additional Holmes stories, and in fact, after the success of The Hound of the Baskervilles, Doyle resurrected Holmes with additional tales. Interestingly enough, Holmes himself is not physically present during the middle-section as Dr. Watson takes center stage and the suspense is heightened. When Holmes does make an appearance the plot thickens, as they say, and together Holmes and Watson unravel the mystery of the hound on the moors, and the deceptions and motives therein. It’s a grand tale, with Holmes at his best and using his deductive faculties to full effect. The Hound of the Baskervilles was first published in 1901. Shown here is the 1964 Scholastic paperback edition with moody cover art by the great Mort Kunstler. 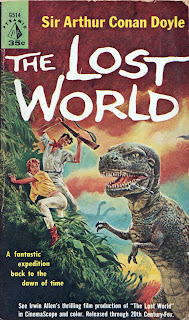 Published in 1912, and presumably influenced by Journey to the Center of the Earth by Jules Verne, The Lost World introduces Professor Challenger, Doyle’s best known creation next to Sherlock Holmes. I was unaware of Doyle’s novel until I saw a screening of the 1960 Irwin Allen film as a child. The book is one of Doyle’s best, and widely considered a science fiction classic. The pace is leisurely at the onset, but once Challenger and his team are in the jungles of South America, Doyle effectively exploits the suspense with some action and descriptions that bring to life not only the dinosaurs, but a lost race of ape-men and a tribe of isolated humans. Doyle has created a dizzying adventure, presented without pomp, but exciting nonetheless. Doyle followed with a sequel, The Poison Belt (1913) and the seldom discussed The Land of Mist (1926). He also wrote two shorter Professor Challenger stories, When the World Screamed (1928) and The Disintegration Machine (1929). The Lost World’s influence is profound. Edgar Rice Burroughs was duly influenced to write The Land that Time Forgot (1916) and the “Lost World” sub-genre of science fiction is a staple today, most notably with Michael Crichton’s Jurassic Park (1990) and its sequel, cleverly titled The Lost World (1995). Perhaps best of all is the modern classic, Cryptozoica (2010) by Mark Ellis. Shown here is the 1960 pyramid paperback for the Doyle novel with the front and back cover exploiting the Irwin Allen film. 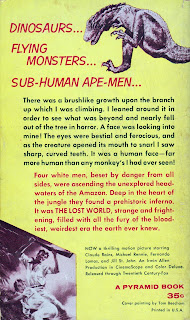 Posted by Thomas McNulty at 6:01 PM No comments:

Forever and a Day by Anthony Horowitz 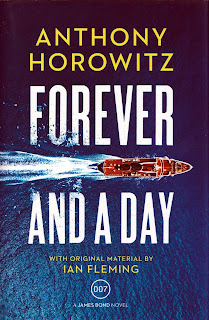 As soon as I heard this was available, I ordered my copy from Amazon UK. I had no intention of waiting for the New York publishing industry to wake up. The book won’t be released here in the US until November. Amazon shipping has eliminated the need for involvement by US publishers for titles by British authors. The book arrived within a week and I read it nearly on the spot. Horowitz previously published Trigger Mortis, his first James Bond novel, and I loved that, and I loved his Sherlock Holmes novel, The House of Silk. That’s right, for those of you unfamiliar with this author, Anthony Horowitz has written a modern classic Sherlock Holmes novel and a James Bond novel. And now he turns in another James Bond novel that is among the best of all Bond tales. Forever and a Day is the equal of any James Bond novel by any author, including Ian Fleming, Bond’s creator. This is a great book. However, if you’re not already a fan of Ian Fleming’s Bond novels, then skip it. This is the true literary James Bond, and not the film character. Once again using unpublished material by Ian Fleming, Forever and a Day is a well-crafted, tight thriller. A prequel to Casino Royale, the first Bond novel, we learn how Bond acquired his 007 designation. No spoilers here, but the various ingredients, including the title’s importance, an over-the-top villain named Scipio, an alluring femme fatale named Sixtine, all move toward the inexorable and brutal conclusion. There have been many, many Bond novels by various authors since Fleming’s death, especially by John Gardner and Raymond Benson, and while I have enjoyed them, Anthony Horowitz has turned in a game changer with Trigger Mortis and Forever and a Day. There is consistency here, and above all else an abiding respect and understanding of the character. My fingers are crossed that Horowitz will write another one.
Posted by Thomas McNulty at 9:02 AM No comments:

The Case of the Missing Message by Charles Spain Verral 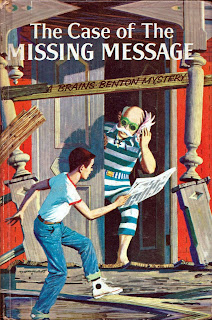 Author Charles Spain Verral and his creation, Brains Benton, are legendary among us literati who came of age in the 1960s. Verral was a pulp writer who published under the pseudonym George L. Eaton and wrote most of the Bill Barnes, Air Adventurer stories. He also wrote scripts for the 1940s Mandrake the Magician radio program, and he was employed as an editor for Reader’s Digest for several decades. He wrote several titles for young readers, including books about The Lone Ranger and Lassie. The Bill Barnes, Air Adventurer pulp magazines command high prices today, especially those with covers by artist Frank Tinsley; and the Brains Benton novels are coveted by those of us that read them in our childhood. The Case of the Missing Message was the first Brains Benton novel and was published in 1959. Whitman Publishing reprinted all six Brains Benton novels in the 1960s and I read them in order. The illustrations are by Hamilton Greene and evoke a nostalgia for a bygone era. Brains Benton himself is like a youthful Sherlock Holmes. He’s the brainy kid in the neighborhood who excels in Science Class and knows a little bit about everything. Hamilton Greene draws Benton with his fingers making a triangle just like Sherlock Holmes. In fact, Verral describes Brains Benton as if her were a kid turned scientist and half-brother to Sherlock Holmes himself: “He had on a long white coat, the kind scientists wear, and his fingers were pressed tightly together to make a church steeple.” Benton’s deductions are usually based on his observations and practical knowledge, just like Holmes. The novels are told in the first person by Jimmy Carson, an average kid who wears his jeans cuffed, gym shoes, and short-sleeved shirts. The Case of the Missing Message is a classic youthful adventure, long out of print, and deserving of a reprint with the original covers and illustrations. In this premier tale, Carson explains that Brains and himself run the Benton and Carson International Detective Agency and Carson is Operative Three. The allure is the direct connection to young American boys, and Jimmy Carson exemplifies the average kid who loves baseball and bicycles. The images and scenes in The Case of the Missing Message are incredible – A spooky place called the Madden House, a man wearing a blue and white striped bathing suit and goggles, a charging elephant, a fortune teller named Cleopatra and her screaming parrot, and various daring ventures. This first Brains Benton novel is undoubtedly the best, followed by five more, all credited to author “George Wyatt.” According to several Internet sites, the books were commissioned to another author but Verral was dissatisfied with the quality and rewrote all five books from a submitted outline. The five subsequent titles are all quite good, with my other favorite being The Case of the Stolen Dummy. The Brains Benton series retains a loyal following, and new Brains Benton adventures have been published by several authors. 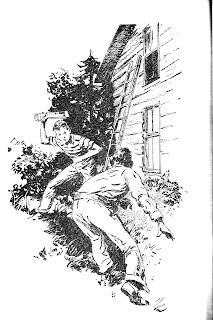 Posted by Thomas McNulty at 5:46 PM No comments: