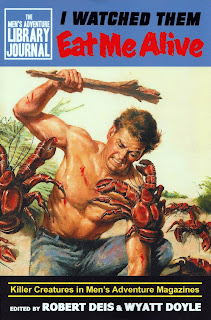 Compiling cover art and a handful of hard-boiled stories, editors Robert Deis and Wyatt Doyle take us back to the age of men’s adventure magazines. Once widely available on newsstands and spinner racks, men’s adventure magazines (or MAMs) were a common and profitable part of the magazine industry from the early 50s through the 70s. There is nothing like these magazines on the racks today, much to my dismay. With story titles like “Trapped in Mexico’s Cave of Giant Rats,” “I Battled a Giant Otter,” “The Hot-House Hussies Who Teased a King,” “The Big Blonde and the Black Beast Ripper,” and “Sex Rites of the Inca Priests,” such magazines as Man’s Conquest, Hunting Adventures, For Men Only, Peril, Champ and Impact were consumed by an eager readership. The cover paintings often depicted nude or semi-nude women in dangerous situations, and the men were always knee deep in snakes or being attacked by some other wild beast. The stories were flaunted as being “true” sometimes but that didn’t matter. This is kitsch all the way, and what fun it was! Deis and Doyle offer an informative text with full-color reproductions that will raise your blood pressure. Best of all, five stories are reproduced, and you’ll love “I Watched Them Eat Me Alive” by Stan Smith, “Flying Rodents Ripped My Flesh” by Lloyd Parker, “Terror Safari” by Lester Hutton, “Strange Revenge of Wyoming’s Most Hunted Giant Puma” by Robert F. Dorr, and “Trapped in the Bayou’s Pit of a Million Snakes” by Walter Kaylin. With Deis and Doyle including biographical info on the writers who often used a pseudonym, I Watched Them Eat Me Alive is a delight for both the pulp fiction collector and fans of men’s adventure magazines. Other volumes in their series include Weasels Ripped My Flesh, He-Men, Bag Men & Nymphos, Cryptozoology, Barbarians on Bikes, and A Handful of Hell. Highly recommended!
Posted by Thomas McNulty at 9:50 AM