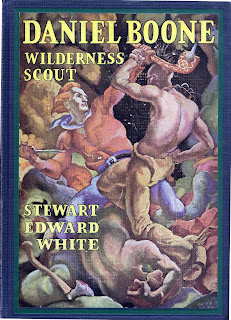 This 1922 hardcover with illustrations by James Daugherty is quite entertaining. I am not a historian, however, so I cannot verify the factual authenticity. Either way, author Stewart Edward White was a capable novelist, and this “biography” reads like an adventure story. There are obviously many suppositions and assumptions included in the narrative, much in the same manner of John Mason Brown’s later biography. Any Daniel Boone fans or historians encountering this book are reminded that author Stewart Edward White was a best-selling fiction writer, and several of his novels are sought after by bibliophiles today. I am specifically referring to Conjurer’s House (1903), The Leopard Woman (1916) and Simba (1917). His non-fiction travel books are similarly coveted, including African Campfires (1913), The Cabin (1910), and The Rediscovered Country (1915). And there’s more. White’s own biography is fascinating, and his interest in the paranormal resulted in several influential books. There is enough interest in White today among bookhounds to keep things interesting, although the hardcore interest we see with later pulp writers hasn’t included him yet. White was born in 1873 and died in 1946. I’ll cover some of the titles mentioned here at a later date. Daniel Boone: Wilderness Scout offers a conversational style, eschewing the chronology occasionally to discuss the value of a good axe or the historical importance of a flintlock rifle. The book should be considered his interpretation of Boone’s life, compiling the basic facts and re-affirming the legend that has followed Boone even before his own death. The illustrations by James Daugherty, including color plates, are fantastic. White sums up Boone’s life succinctly: “The picture that persists at the last is not the smoke and dust of battle and combat, but the figure of a serene, unworldly, kindly soul, fronting what fate brought him, whether of peace or of turmoil, with spirit unruffled and unafraid.” That, at least appears truthful, by all accounts, and Daniel Boone continues to hold our attention. 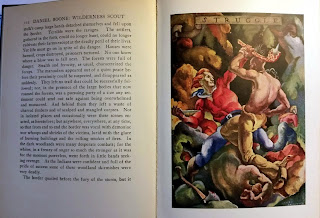 Posted by Thomas McNulty at 1:56 PM