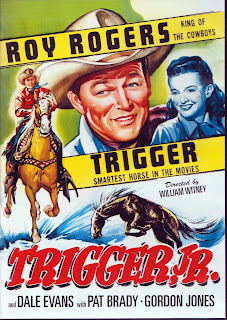 Revised 12-14-18
UPDATE! In my original blog post I stated that Kino Lorber was responsible for the restoration. That is not true according to author David Morrell who wrote:  “Kino Lorber is a DVD distribution company. They don’t restore films. But Paramount (which now owns the Republic catalog) has restored 22 RR films and is looking for ways to make them available, such as through TCM. I’m working on a RR project that might help. When Republic went out of business, the new owners failed to re-register the copyrights for half their films. That applies to RR films.” I don’t have the titles of the 22 restored films but I will post additional updates as they become available!

There has long been a high demand for restoration and a DVD-Blue-Ray release of the nineteen TruColor features William Witney directed at Republic and starring Roy Rogers. Kino Lorber has released two recently, Trigger, Jr. and Sunset in the West, both from 1950. Film historians and fans are well acquainted with the neglect these films have suffered, and the many problems associated with locating and restoring the prints. When they were released for television, they were severely edited, transferred to black and white, all of which resulted in a chopped up, dismal filmography for one of Hollywood’s legendary stars. Unlike Gene Autry, who maintained a film library with the intention of restoring and making them available to a new generation, The Roy Rogers features were sold and resold, some becoming part of the public domain, and little care was given to the handling of the prints. That’s the short version of a complicated problem.

These films are notable because director William Witney added a sense of urgency and swift action to the Rogers features. TruColor was added by Republic Pictures to compete with the trend of dazzling audiences with brighter, fuller pictures. Witney at times also scaled back the music, perhaps recognizing that the days of singing cowboys were numbered. While Rogers was still a popular recording star, the Witney films limited the music to about three songs, whereas in his earlier films Rogers was constantly singing, and sometimes as many as five songs might be featured.
In a William Witney film the action scenes are always exemplary. In Trigger, Jr there are several fistfights, but what stands out are the scenes with the horses. A fight between an evil white stallion and Trigger, Jr. is an amazing action sequence. In Trigger, Jr., Rogers doesn’t strap on his gunbelt until the end. The plot involves Rogers heading a traveling circus and getting involved in a corrupt range patrol led by Grant Withers. About midway through the film the circus acts get highlighted with a brief compilation of scenes that looks splendid in TruColor. Seen today, such scenes are a reminder that circuses were once a prominent part of American culture, and widely accepted as a staple of entertainment. 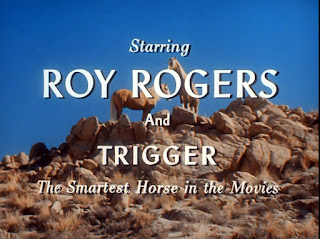 Dale Evans has a modest role in the film, and briefly sings a duet with Roy. Pat Brady also appears, looking much the same as he did during the The Roy Rogers Show which ran on the television from 1951-1957. Of note here is the opening title sequence with a beautiful orchestration. R. Dale Butts is credited for the music, but Nathan Scott and Stanley Wilson had an uncredited hand in the orchestration according to the Internet Movie DataBase.  The opening title sequence is visually stunning and features Trigger, Jr. filmed against a blue sky and high in the rocks. Many of the exterior scenes were filmed in the desert and rocky hills of Lake Los Angeles. 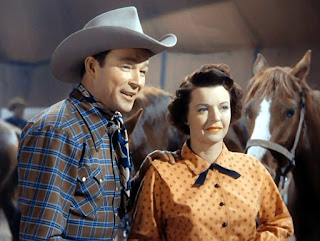 The restored DVD/Blue-Ray offers the best print available for both Trigger, Jr. and Sunset in the West. By comparison, Film Chest offers a color version of Springtime in the Sierras (1947) on DVD but this is a poor quality print lacking in restoration. 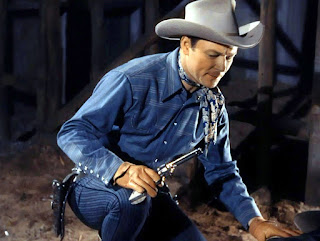 The Roy Rogers brand of family entertainment feature films deserve the quality treatment afforded by this restoration, and all credit is due the parties responsible at Paramount (current owners) for their exemplary efforts at film restoration. My goal with this post is blunt and simple – support these restoration efforts by purchasing the DVD of Trigger, Jr. and Sunset in the West with the hope this will encourage additional restorations of the Roy Rogers TruColor classics. 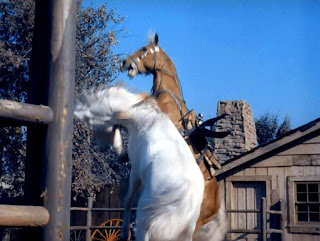 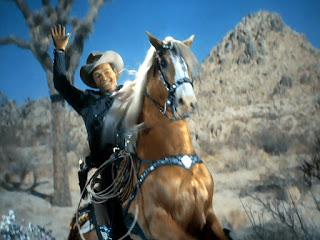