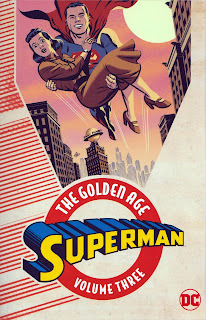 This, at least, DC has done right. Volume three in Trade Paperback format continues their historic reprinting of Superman’s entire Golden Age issues. DC’s intention is to reprint all of the Superman Stories from the Golden Age, and then continue with the Silver Age. This massive undertaking has already seen 3 volumes of Batman reprints, World’s Finest, and Silver Age volumes for Justice League of America, Flash and Green Lantern. The Superman reprints will take years just to reach landmarks like Action Comics # 300 or Superman # 200. Volume 3 reprints Action Comics # 32 – 40, Superman 8-11 and World’s Best Comics # 1 and World’s Finest # 2. The reproductions are bright and faithful to the original color schemes, including errors. For example, on the cover of Action Comics # 38, the “S” on Superman’s cape was blue, and DC retained the original error in this reprint, as they should have. This volume also takes us to the eve of World War II. Superman co-creator Jerry Siegel wrote every story included here. It is also at about this time that Joe Shuster’s artwork begins to take a back-seat to other staff artists who would leave an indelible mark on Superman’s mythology. Notably, a young Wayne Boring is doing more work and Jack Burnley’s beefy style adds another dimension to Superman’s image. The series is clearly evolving, along with Superman’s “S” emblem which is still either hastily sketched or outlined and rounded for clarity. The stories are also better, and author Jerry Siegel is obviously enjoying himself. Still basically crime dramas, the science fiction elements wouldn’t appear for several years yet. Lois Lane is a vital character in these stories, and editor Perry White and Clark’s job at the Daily Planet is firmly established and serves as a starting point for many of these tales. We are still a full ten years from George Reeves taking on the role in the film Superman and the Mole Men. I recommend these volumes in conjunction with the Sunday Page reprints from IDW Books for a better understanding of the Big Blue’s development. Volume 4 will be out later this year. Recommended!
Posted by Thomas McNulty at 7:02 PM