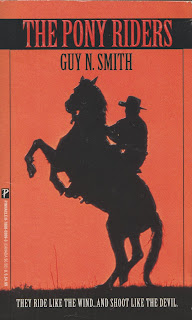 Published in 1997 by Pinnacle, The Pony Riders is (as of today) Guy N. Smith’s only Western. It is also one of his longest books. It is also a breathtaking, action-packed masterpiece of genre writing, and one of my favorite Westerns. I own two copies. The Pony Riders is available for Kindle along with many of his titles. Young Ben Hollister becomes a Pony Express rider after seeing his parents killed by Indians and his sister abducted. His legend begins quickly and the Indians call him “Slayer Who Rides With the Wind.” Working for Joseph Slade, a killer, becomes a challenge made all the more difficult as he works toward a showdown he’s destined to have with the mysterious Paiute called Blood Arrow. Hollister’s relationship with Slade is central to the novel’s plot. Hollister doesn’t necessarily approve of Slade’s brutal methods, but he’s effective at what he does, and somehow Slade manages to stay alive, often against impossible odds. Hollister recognizes that he’s becoming a lot like Slade, whom the Indian’s call “The Man Who Likes Killing.” So it is that “Slayer Who Rides With the Wind” and “The Man Who Likes Killing” become legendary. The backstory of locating his long lost sister doesn’t really come into focus until later in the novel, after Hollister falls in love and marries a saloon girl named Mollie. Skilled in the ways of love, she teaches Hollister a thing or two and proves to be a positive influence. There’s gunplay aplenty, wild horse chases, scalping, ambushes, and one devious character after another. The paperback clocks in at 380 pages, which is normal by today’s standards but long for Smith. As I mentioned, one of my favorites, and a real treat for not only fans of Westerns, but for Guy N. Smith’s fans in general. The Pony Riders is well known among Smith’s fans. The book sold well upon publication and leads me to wonder why Pinnacle didn’t ask for more Westerns from him. This is one where I tell people, if you encounter a copy of this paperback then buy it. They are not as common as you think, and it’s a great book. Guy N. Smith’s diverse talent includes this Western, the many horror novels, and contemporary thrillers like The Black Fedora and The Eighth Day. His books on the countryside life of shooting and gamekeeping are just the tip of the iceberg.

Posted by Thomas McNulty at 5:37 PM