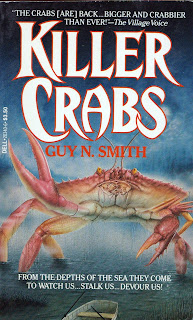 This 1978 novel is a sequel to Smith’s best-selling Night of the Crabs and one of my favorites in the series. The writing is compact, the plot tightly-weaved, and the characters, their actions and the imagery as sharp as a photograph. I consider Killer Crabs not only one of the best crabs novels, but among Guy N. Smith’s classic horror stories. By the way, I recommend reading the crabs novels in chronological order. Characters reoccur in each novel, especially Chris Davenport, the protagonist in Night of the Crabs. Killer Crabs introduces an Australian named Klin, a tall muscular, athletic Aussie with thick black hair and an appetite for voluptuous women. Klin is one of my favorite Smith characters, and his appearance here is a delight. Not only does he go toe to toe with those murderous crabs, but he indulges his manhood with a vixen named Caroline du Brunner who can’t get enough of his thrusting desires. Fortunately, Klin knows his way around a women’s body and gives Caroline what she’s looking for. Meanwhile, the killer crabs are back and Klin joins forces with Chris Davenport from the first book as they try to stop the crab attacks. The attacks themselves are conducted on a grand scale this time out, and once again the military is stymied by their inability to pierce the crab’s shell. Bullets and artillery have little effect on these giant crustaceans, and the crab attack on a seaside town and the hotel where Caroline enjoys her trysts is a virtuoso piece of pulp fiction action. With Killer Crabs, Guy N. Smith has perfected his formulae, and readers will not soon forget the evil red look of hatred in the beady eyes of those giant crabs.

Posted by Thomas McNulty at 6:34 AM