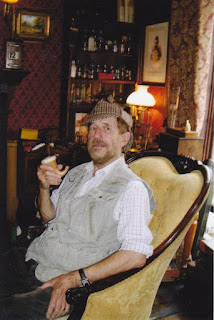 Legendary author Guy N. Smith took time out from his busy schedule to answer some questions, and offer a sneak peek at what he’s working on now. Pull up a comfortable chair, tamp some tobacco into your pipe and lite it, and sit back and enjoy!

TM: Can you tell me what books you read as a child that inspired you? And do you have any favorite authors that you follow today?

GNS: As a child I read Enid Blyton extensively and W.E. Johns (Biggles). I also took 14 boys' papers/comics every week paid for out of my gardening money.  I had a regular round of 4 local gardens to maintain. My favourite authors from my teenage years onwards were Leslie Charteris (The Saint), Sapper (Bulldog Drummond), Conan Doyle (Sherlock Holmes), John Buchan and westerns by Zane Grey and Oliver Strange (Sudden).  I have a collection of several thousand vintage books in both genres and often re-read some of my favourites.
TM: I consider The Pony Riders a masterpiece. It’s also a long book, perhaps your longest. Have you thought about writing another Western?

GNS: I am considering another western.  However, this year sees The Reaper, a novel about a feared master criminal who is also a disciple of Satan and, coinciding with my Fan Club Convention (September 2nd), the long promised Sabat 5.  This is set in Wistman's Wood on Dartmoor, the most haunted wood in the UK.  Christmas will see a history of shotgun cartridges over the past century.  Collecting these is a fast growing hobby in both the UK and USA.

TM: The two Jason Ford books and the two John Mayo books are really contemporary thrillers. Is this type of police procedural and thriller something we can look forward to in the future?

GNS: Yes. The Reaper drops into this category.

GNS: I guess my favourite is The Slime Beast set on the Wash where I used to go wildfowling in the 1960s which gave me the idea for the book.

TM: Recently you’ve published sequels to some of your previous novels - Killer Crabs: The Return and Spawn of the Slime Beast. Do you have any other sequel surprises lined up for us?

GNS: Sabat 5 as already mentioned.  Currently I am awaiting the film script of The Slime Beast.  There is also some interest in Killer Crabs but I cannot reveal more on this at present.

TM: How many hours in a week do you spend writing, and do you have any general advice to any young writers that will read this?

GNS: I generally write in the mornings, 2-3 hours.  I write by hand as I have always done and have no intention of changing to a keyboard.  I find handwriting much faster and easier.  Regarding advice to young writers:  spend time on a detailed synopsis then think hard and long about the plot and characters.  Writing the book will be much easier this way and any changes will come naturally.

TM: I read on your website that your house at Black Hill is haunted. Can you tell me a little about that?

GNS: Yes, my house is haunted - by my mother who lived here for the last 2 1/2 years of her life.  I have seen her personally as did our grandson at the age of 5 who stayed here and slept in her room.  He had never seen her but he described her to perfection.  She is still active - very annoying, things disappear and then turn up days, weeks later!

TM: The history of the druids plays a role in several of your novels. That’s wonderful, rich material. How much research do you do when you’re writing?

GNS: I do a lot of research, on-going not just when I am considering a novel.  I make notes of various observations and ideas for future use.  Then often an idea occurs to me and I have them at hand for reference.  There are ideas all around us.

TM: A bog plays a role in The Sucking Pit, one of your most popular novels. Do some of these ideas stem from your active countryside lifestyle? You must have encountered a spooky bog a time or two.

GNS: The Sucking Pit is a strong favourite of mine.  When I was aged about 6 my grandfather used to take me for Sunday afternoon walks in Hopwas Wood.  This was just after World War II and a German bomb intended for a nearby railway line missed its target, landed in the wood and the result was this huge crater which filled with water and algae.  Fearing that I might at some stage go there on my own and drown, my Grandpa told me that horrible creatures lurked below the surface.  It was all very scary and resulted in the book years later.  Fairly recently I revisited the site and found that the crater had filled in over the years and did not exist any longer.  However, it was a good plot for the book.

TM: Thank you for taking time to answer these questions!

GNS: I am most grateful to my many fans.  Any who wish to get in touch with me are welcome to do so.  Everybody receives a personal reply from myself.  Nobody is ever ignored. 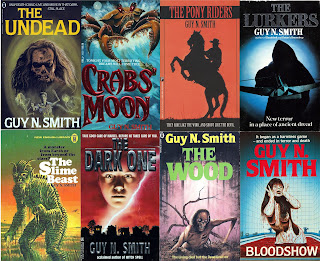 Posted by Thomas McNulty at 6:14 PM