The Deviates by Raymond F. Jones 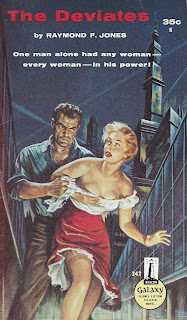 Raymond F. Jones wrote many fine novels, but for some reason this Beacon paperback from 1959 is the one that collectors want. For example, I own a first edition hardcover of Jones’ This Island Earth, his best known work, and collector’s rarely show substantial interest. This Island Earth is not difficult to find. I own the Science Fiction Book Club edition from Shasta publishers out of Chicago. The original owner had slipped the 1953 Science Fiction Book Club pamphlet into the book. We collector’s do have esoteric tastes at times. Anyway, The Deviates was originally published in 1956 as The Secret People. Nobody wants that edition either. They want this 1959 Beacon reprint with artwork by Robert Stanley. The Deviates is a science fiction story, published under Beacon’s Galaxy Science Fiction imprint. This paperback is widely offered on e-bay, often listed as “rare” but it’s not rare. Action Comics # 1 is rare. The Deviates is everywhere. I see this book all the time. For the record, if anyone tells you this book is rare they’re either intentionally lying or ignorant of vintage basic book collecting. It’s become the trend to list something as “rare” in order to justify a higher price. There are hard-to-find titles from this era, but The Deviates is not one of them. The Deviates is a good book, and I recommend it. This is the story of Robert Welton, Chief of the Genetics Bureau, who discovers that the genetics program is failing. There are fewer Normals each year, and most amazingly of all, he learns that not all Deviates are flawed. In fact, some of them are telepathic – like Welton himself! He initiates a plan begun by his father, to form a group of secret people who are hiding in the Canadian wilderness. Born of natural mothers and bearing his genes, the colony comes under attack when a government committee learns of their existence. The Deviates is a dystopian novel, typical of the era, and strong on characterization. Jones imagines a frightening world that promotes itself as utopian, but is actually simmering with conflict. Welton and the other characters propel the narrative. I’m a fan of author Raymond F. Jones, and in addition to The Deviates, I can recommend This Island Earth, Son of the Stars (for young readers), The Year When Stardust Fell, and Renegades of Time. I may cover some of these at a later date. Jones began his career in the pulps in the 40s. Several of his books are available for Kindle.
Posted by Thomas McNulty at 8:02 PM No comments:

The Curse of Skull Canyon by Peter Brandvold 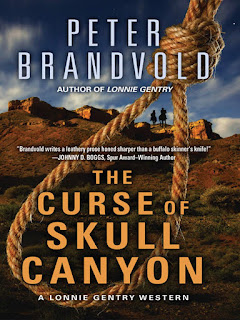 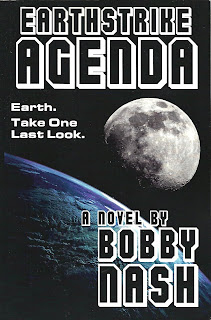 I find it immeasurably enjoyable to read a science fiction novel where it’s obvious the author was having fun. Too many authors take themselves and their work so seriously, that the entertainment value is muted by their pomposity. Fortunately, that’s not the case with Bobby Nash. Here’s an author that jumps right into the tale with a gee-whiz attitude and spins an exciting Space Opera with all of the galactic world-building you could ask for. Earthstrike Agenda is New Pulp Fiction at its best, professionally written, thrilling and satisfying. The various elements of the tale will be instantly recognizable to readers, including a dash of Star Trek, Star Wars and Flash Gordon, all while weaving an original story that will keep readers on the edge of their seats. Nash creates a fantastic protagonist with starship captain Virginia Harmon who takes command of the ship, Pegasus, just as earth is about to face a threat from deep space. Nash creates a vibrant supporting cast, and devotes large chunks of multiple chapters to them. With so many players, I admired Nash’s ability to not only keep track of them, but to make them relevant. Earthstrike Agenda is decidedly Old School adventure writing, and I mean that in a positive way. The drama unfolds at an easy pace, builds momentum, and before you know it you’re racing along with Virginia Harmon, Dr. James Silver, Ensign Bailey and others as the fate of earth hangs in the balance. An expertly constructed Space Opera like Earthstrike Agenda shouldn’t be missed by any Sci-Fi fan. Highly recommended.
Posted by Thomas McNulty at 7:50 PM No comments:

Mad Shadows II: Dorgo the Dowser and the Order of the Serpent by Joe Bonadonna 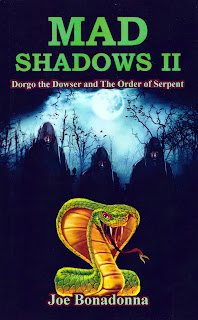 This eagerly awaited follow-up volume to Joe Bonadonna’s classic, Mad Shadows, is exactly what I hoped for. This continuation of Dorgo’s chronicle is comprised of three novellas: “The Girl Who Loved Ghouls,” “The Book of Echoes” and “The Order of the Serpent.” This is razor-edged fantasy at its best. In the first tale, Dorgo has some romance going on in his life, with a witch. This is not a Harlequin romance. Bonadonna’s masterful prose is ripe with images, appropriately gothic, spooky as hell, and a delight for fans of classic fantasy-adventure fiction. I love Bonadonna’s world building. Laced with autumnal winds and lonely graveyards, Dorgo’s world is chilling and often deadly: “What little was left of Glacken lay to the south, between Widow’s Fell and Baloo Fen. The fire blackened ruins of Sahn Magnor, the old Estaerine church, stood on the outskirts of the ghost town. The cemetery lay behind the church and had been part of its once-sacred ground. I gave the supposedly haunted hamlet a wide birth, not wanting to encounter any demons or devils…” (p.30) I love this type of natural exposition where the writer can so deftly transport us into an imaginative and exotic locale. Dorgo never has an easy time of it, but I’m always rooting for him to overcome his tribulations. Bonadonna pits Dorgo against some fairly wicked creatures. In “The Book of Echoes” Dorgo learns about “The Book of Echoes” which seems to be on everyone’s mind. After being nearly killed, Dorgo learns that the book can open realms beyond time and space, and holds answers to all the riddles of the Echoverse, the secrets of life and death, and the Nine Levels of Attainment. But such knowledge has a price. Those who are pure of heart will become the Crystal Children, while those with evil intent will become Endarkened Ones. Bonadonna brilliantly structures the tale and populates it with plenty of weird characters, nasty monsters and rising tension. The third novella, “The Order of the Serpent,” ties it all together and pits Dorgo against a warlock, the leader of the Order of the Serpent. Engaging characters, artful construction, scenes dripping with mood, and a world of castles, goblins and wild monsters are all hallmarks of Joe Bonadonna’s Dorgo the Dowser tales. Impossible to put to down, Mad Shadows II: Dorgo the Dowser and the Order of the Serpent is a richly imagined collection. The great cover artwork is by Erika M. Szabo.
Posted by Thomas McNulty at 5:45 PM No comments: