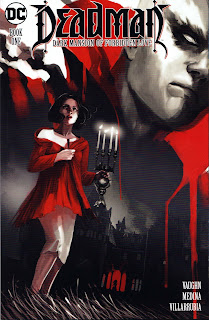 Deadman has long been one of comic’s underrated characters. I recall vividly the character’s initial appearance in DC’s Strange Adventures way back in 1967. Strange Adventures was one of those off-titles we kids bought only when we were bored with caped heroes (which rarely happened) or if nothing else on the spinner rack looked interesting. I have very few of these in my collection today. I loved the Neal Adams covers on just about anything back then. Adams did most of the early interior art as well. Those stories were later reprinted, and I recommend you track them down. Deadman has experienced only a modest revival here and there. When DC Comics announced the three issue mini-series, I made it a point to check in. Written by Sarah Vaughn with artwork by Lan Medina Deadman: Dark Mansion of Forbidden Love is excellent. Author Vaughn remains true to Deadman’s original characterization, but better yet, she tells a fresh and wholly original ghost story. I enjoyed every gothic page. Arriving at Glencourt Manor, Deadman encounters Adelia Ruskin, a ghost, whose connection to Berenice, a visitor, drives the mystery. There’s romance and complicated relationships, (Nathan and Sam), all of which lends the tale an aura of gothic romance laced with supernatural occurrences. I loved the artwork by Lan Medina, assisted by Phil Hester, with colors by Jose Villarrubia. The great cover artwork on the three installments is by Stephanie Hans. Combining the appeal of the romance comics of yesteryear, with the moody narratives once found in horror comics, Dark Mansion of Forbidden Love is an outstanding and wholly satisfying tale. With these three issues, I am now a fan of all the creators involved. DC Comics executives are making a heartfelt effort with their entire line of comics, and the results are fantastic books like this. I believe Deadman: Dark Mansion of Forbidden Love will soon be available as a collected trade paperback. Buy it, save for Halloween, and read it at midnight. Kudos! 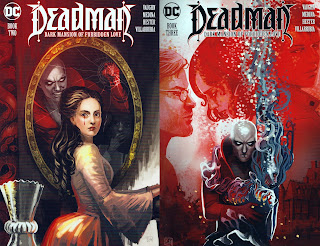 Posted by Thomas McNulty at 7:16 PM No comments:

The Love Seekers by Jay Carr 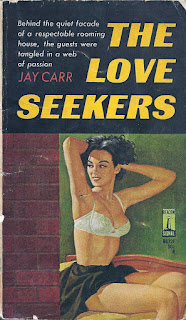 This vintage 1963 paperback might once have been described as “sleaze.” Sleaze is now called “erotica” which is the academic community’s way of applying manners to frank discussions about the horizontal bop. It’s all about sex, complicated relationships, and more sex. The cover artwork appeals to the testosterone crowd and generally gets across the book’s theme. Published by Beacon-Signal, whose phallic lighthouse logo was an indication of the lively prose one would find in their books, The Love Seekers is far less explicit than you might expect. The Love Seekers is about three girls in a boarding house – Nina, Joyce and Jerri – and the ignited passions they experience with Eddie and Martin, the two very lucky males who, if you’ll pardon the expression, come onto their radar. I think “boarding houses” must also be a thing from the past. I don’t know of any boarding houses any more (essentially, cut-rate dormitory style hotels). After reading The Love Seekers you’ll want to hitch-hike across the country, check into a cheap boarding house, and frolic with girls like Nina, Joyce and Jerri. There are worse things you could be doing with your time. Books like The Love Seekers are about desire, physical and emotional, and the trouble it causes under certain circumstances. Nina is the granddaughter of the boarding house owner and involves herself with men out of boredom; Jerri is a wealthy heiress also bored with life who finds excitement giving herself to men; and Joyce is married but unfulfilled. Martin and Eddie find themselves saddled with some unique problems in addition to their own wacky lives. The tag line makes it all clear: “An intimate glimpse of life as it is really lived behind the respectable facade of a down-at-the-heels rooming house.” Sounds like a good place to check in.
Posted by Thomas McNulty at 6:09 PM No comments: 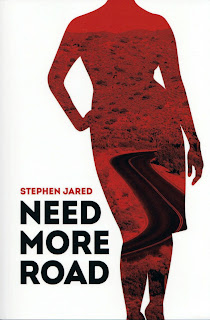 Every time I read one of Stephen Jared’s books I come away from the experience impressed by his insight into human nature. He knows people, and he understands their foibles, idiosyncrasies, desires and dreams. His fiction is dramatic, adventuresome, and infused with real emotion. I can never guess how the plot will turn out, but I am compelled to turn the page. Need More Road is a heartfelt story about Eddie Howard, a bachelor with a lonely life. He takes pleasure in movies because there’s not much else to do in post-war Barstow, California. Working as a bank clerk, his life changes when a knockout blonde doll with movie star looks walks into the bank to set up an account. The tension builds inexorably, and the woman, Mary Rose, is part of a plan to rob the bank. I will say no more regarding the plot, except that Eddie and Mary share a long and winding road together. This is a short novel, and the pacing is even. The circumstances Eddie and Mary Rose find themselves in have an existential feel to them, which by its literary application involves the characters experiencing confusion in our absurd world. This is not blatant, but rather a feeling I had reading the book. Hollywood is part of the background, but greed and desire drive the plot which lends a film noir feel to the narrative. I don’t know if Jared intended that, but the tone is the direct result of Eddie and Mary Rose’s actions. Eddie sometimes struck me as a Walter Mitty type, and in one brief scene he imagines making love to Mary Rose in Paris when he’s actually at a dismal gas station. His relationship with Mary Rose after the robbery is surreal. Stephen Jared is a splendid writer, and the prose flows seamlessly. I enjoyed Need More Road, as I have enjoyed all of his stories. Jared has a natural born talent, which is complemented by his career as a professional actor in Hollywood. Kudos!
Posted by Thomas McNulty at 1:31 PM 2 comments:

The Roots of Heaven by Romain Gary 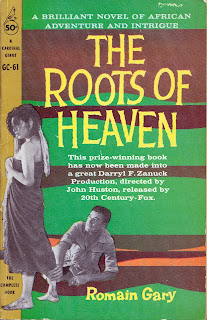 Titled Les Racines du ciel in France, the novel won the 1956 Prix Goncourt, a prestigious literary award administered by the académie Goncourt.  The book was translated into English by Jonathan Griffin and published in hardcover as The Roots of Heaven in January, 1958. Shown here is the second paperback edition (September, 1958) featuring Errol Flynn and Juliette Greco on the cover although their names never appear anywhere on the book. This edition coincided with the release of the Twentieth Century Fox film. Director John Huston and producer Darryl F. Zanuck are named on the book’s cover. For vintage paperback collectors this is the Pocket Books Cardinal Giant GC-61 and priced at 50 cents upon its release. The page count is 389 pages which was thick for a traditional pocket paperback. Gary’s novel is quite good, although my assessment is obviously based upon the translation. The protagonist is Morel, who is described as a man who exceeds loneliness and is quoted as saying: “People feel so damned lonely, they need company, they need something bigger, stronger, to lean on, something that can really stand up to it all. Dogs aren’t enough; what we need is elephants…” There are enough motifs and themes in all of post-World War II French literature to keep an academic elbow deep in analysis for a lifetime, and these ideas are sprinkled throughout the narrative, although I discerned nothing that was blatant other than Gary’s intent that Morel represents an “allegory of ideas.” His fixation on elephants drives the plot. Readers are free to infer what analogies they may as the adventure unfolds. The supporting players are a diverse lot and add substantial texture. This includes Minna, a German girl had had lost her innocence when Berlin fell to the Allies; A brainwashed American officer named Johnny Forsythe; a photographer, a gunrunner and various hangers-on who cross the path of the idealist Morel. The subject matter is typical of a post-war novel and stated implicitly throughout the narrative: “…the elephants were only a pretext, a useful means of propaganda, the symbol of the exploitation of African natural resources by foreign capitalism. They knew of course that colonialism had implanted itself in Africa because of ivory, before turning to more lucrative sports. The elephants were also a convenient image of African power on the march – a power that nothing could stop…they were an anachronism, a weight tied to the legs of a new, modern, industrialized and electrified Africa. They were a survival from a tribal darkness.” (p.213) Morel’s fate is inextricably tied to the elephants and the encroachment upon Africa of an industrialized age. The Roots of Heaven itself is stylistically removed from today’s clipped journalistic prose, even among the French, and its vast array of characters and monologues all combine for an enlightening reading experience for any anyone willing to tackle the book. I enjoyed it, and I took my sweet time reading it to allow its ideas to resonate. It’s easy to see why John Huston was attracted to the material, and while it’s true he said later that he disliked his own film, The Roots of Heaven has its merits. I agree that the film is meandering, and Huston never fully came to grips with Morel’s character and the impetus behind his actions. But Trevor Howard as Morel is wonderful, and the great Errol Flynn, in a brief and watered-down version of the Forsythe character, turns in a superb performance as an aging alcoholic.
Posted by Thomas McNulty at 6:43 PM No comments: