Superman: A Celebration of 75 Years 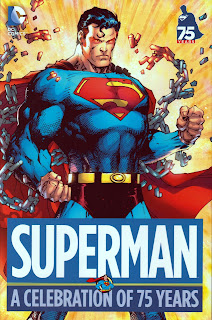 All of the DC Comics “Celebration of 75 Years” hardcovers are beautifully designed, high quality editions. This Superman edition is what I expected. While there are no surprises here, there are some stories worth mentioning. Naturally, the collection reprints the first Superman story from Action Comics # 1. That is obviously the quintessential pulp fiction story. This is followed by the rare “How Superman Would End the War” from Look magazine in 1940. We’re treated to Superman’s origin story, and “The Mightiest Team in the World” co-starring Batman from Superman # 76 in 1952. These and other Golden Age tales are a delight, even though they’ve been reprinted many times before. The real jewel here is “Superman’s Return to Krypton” from Superman # 141 in 1960. This under-appreciated masterpiece was written by Superman co-creator Jerry Siegel with artwork by Wayne Boring. A three-part feature story, author Siegel takes Superman back to his birthplace in a poignant time-travel tale where he meets his parents and falls in love with the beautiful blonde, Lyla Lerrol. It’s not a dream, and Superman interacts with his family and friends without them knowing who he is. But Krypton is doomed, and at the heart of this tale is the idea that Superman is a hero who has lost everything. That key piece of characterization is often overshadowed by this idea that superman is invincible. Wayne Boring is the least appreciated Superman artist today, but “Superman’s Return to Krypton” highlights his fantastic imagination. Boring’s approach to science fiction should be the envy of today’s artists. The background buildings, flying machines, and mechanical apparatus all have that classic feel, and each panel is vivid and alive with motion. The splash page alone is awe-inspiring. The remainder of this collection is also what I expected, and long-time readers won’t be surprised by the inclusion of “Must There be a Superman?” by Elliot S. Maggin, Curt Swan and Murphy Anderson, and “For The Man Who Has Everything” by Alan Moore and Dave Gibbons. Other creators like Gil Kane, John Byrne, Dan Jurgens, and others are represented. Another highlight is the inclusion of both “Death of Superman” stories; the “imaginary” classic from 1961 by Jerry Siegel and Curt Swan, and the 1993 Doomsday story by Dan Jurgens and Brett Breeding. The concluding tales are recent vintage, and their inclusion is a study in contrasts. The color palette is darker, less optimistic, and less satisfying. Comic books are meant to be bright, and they work best when you don’t have to squint through the murkiness. I believe that trend resulted in flagging sales, and DC Comics is currently attempting to turn that around with their “Rebirth” series. Superman: A Celebration of 75 Years is highly recommended.
Posted by Thomas McNulty at 9:04 AM No comments: 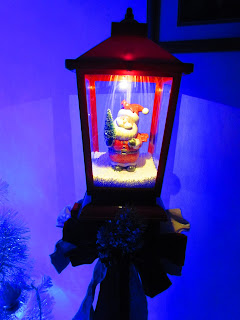 Merry Christmas!
Posted by Thomas McNulty at 7:55 AM No comments: 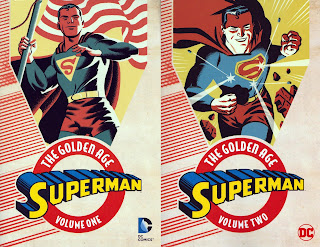 Originally reprinted as “Omnibus” volumes, this historic reprint initiative by DC Comics deserves a better marketing campaign. This is the first time many of these stories have been reprinted. The intention, as I understand it, is to reprint all of the Golden Age and Silver Age titles. That ambitious undertaking starts here with the first two volumes of The Golden Age Superman. These are full color reproductions including the cover for each issue. This constitutes the first comprehensive collection of Jerry Siegel and Joe Shuster’s iconic creation. For the first time since their original appearance, readers can follow the Metropolis Marvel’s exploits as they developed. Volume One reprints the stories and covers from Action Comics # 1 through 19, Superman # 1 through 3, and New York World’s Fair Comics # 1. Volume 2 reprints Action Comics # 20 through 31, Superman # 4 through 7, and New York World’s Fair Comics # 2. The reproduction quality is high, and the full color palette is intact from the original pages. Having the covers included is a bonus. Superman was not always featured on the cover, although that would change swiftly. These anthologies don’t include those peripheral characters, just the Superman stories. Covering the years 1938 to 1940, the contents page identifies the cover artist, with the Superman covers mostly all done by Joe Shuster. However, even by 1940 we begin to see the inclusion of artists Jack Burnley and Wayne Boring who would have a strong influence on the series before the decade ended. These stories represent a bygone era. These tales are from an America that vanished in the wake of World War II, and one might argue that the Superman depicted here vanished as well. Patriotic, idealistic and espousing the virtues of hard work and fair play, Superman was a champion of the oppressed. The anthology cover artist is Michael Cho. These two books are what long-time Superman fans have been waiting for. Kudos to DC Comics for doing it right. 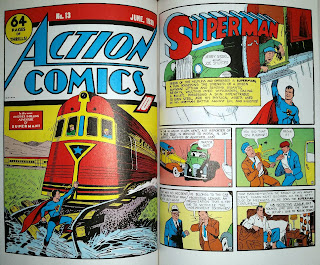 Posted by Thomas McNulty at 12:05 PM No comments: 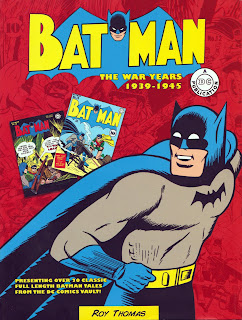 This full color anthology reprints most of the key Batman stories and covers involving World War II, most of which are nearly impossible to find in their original editions. If you do find them, they’re expensive. I once entered into a bidding with a dealer for a high grade copy of Batman # 15, with its iconic Jack Burnley cover featuring Batman with a machinegun. I lost. With an illuminating text by famous comic book scribe Roy Thomas, Batman: The War Years is a fantastic addition to your Bat-library. Roy Thomas puts the selections into perspective, and readers are treated to some of the best and wildest Golden Age Batman tales. In fact, this volume makes a nice bookshelf companion to Batman: A Celebration of 75 Years. The attraction here are the seldom reprinted war stories and war-themed covers from the pages of Batman and Detective Comics. Connoisseurs of sequential comic art will undoubtedly notice the strong influence that artists Jerry Robinson, George Roussos, Jack Burnley, Fred Ray and Dick Sprang had on the series. They not only refined the look of the series, they improved upon creator Bob Kane’s simplistic style. Of course you’ll encounter classic villains such as the Joker and the Scarecrow, and forgotten villains like professor Radium from Batman # 8. Jack Kirby gets a nod with a reproduction of his cover for Detective Comics # 65 (July, 1942) which introduced his team, The Boy Commandos, to the DC universe. Batman: The War Years is my current favorite of the anthologies that are suddenly becoming hot properties with DC Comics. Full-color reproductions are long overdue, and later on I’ll cover some of the other full-color anthologies DC is currently releasing. Other “War Years” volumes include Superman and Wonder Woman.  Meanwhile, Batman: The War Years, 1939-1945 should be on your Christmas list.
Posted by Thomas McNulty at 11:39 AM No comments:

Batman: A Celebration of 75 Years 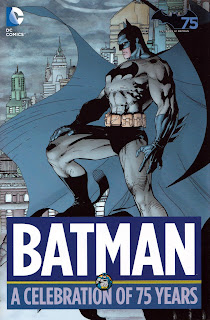 DC Comics has published several additional hardcover “celebrations” marking the 75th anniversary of several characters, and this Batman volume is essential for any collection. From the first Batman story by Bob Kane and Bill Finger, through each wild decade, readers are treated to the diverse interpretations of Gotham City’s Dark Knight. Many of these early stories have been reprinted before, but it’s nice having them in a deluxe hardcover full-color presentation. This anthology series also reproduces most of the covers. Notable here is “The Jungle Cat-Queen” from Detective Comics # 211 in 1954, Catwoman’s last Golden Age appearance by writer Edmond Hamilton and artists Dick Sprang and Charles Paris. “The Batman of Tomorrow” from Detective # 216 from 1955 by the same team is a delight. Naturally, we are treated to “The Origin of the Superman-Batman Team” from World’s Finest # 94. The entries from the swinging 1960s showcase stories by writers John Broome, Robert Kanigher and Gardner Fox with artwork by Carmine Infantino, Sheldon Moldoff and Joe Giella. The key story here is “The Million Dollar Debut of Batgirl” from Detective Comics # 359 from 1967. Then we get a classic Neal Adams tale, “The Secret of the Waiting Graves” written by Denny O’Neil. Here is where I nitpick the collection; I could a have used a few more of the Denny O’Neil stories from the early 1970s. The long-lasting influence of writer Denny O’Neil with artists Neal Adams and Dick Giordano is underappreciated. Writers Steve Englehart and Mike W. Barr and Doug Moench are well represented with artwork by Marshall Rogers, Terry Austin, Michael Golden, Alan Davis, Paul Neary and more. My problem with the later entries being that the stories are often incomplete. The era of stand-alone stories is gone, which is an ongoing mistake by comic book publisher’s today. Today’s comics are created like soap operas with cliffhanger endings and story arcs that don’t conclude for months and months (or years). On the plus side, the writing and artwork is strong. Still, there’s great material here and Batman: A Celebration of 75 Years is recommended for Batfans of all ages.
Posted by Thomas McNulty at 6:25 PM No comments: