Happy Halloween and Welcome to My Graveyard 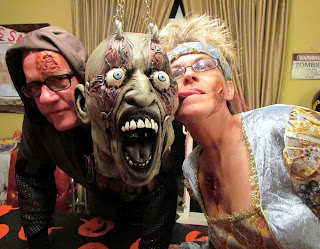 Thank you for visiting my digital home. I hope you don’t mind a little blood on your hands. We’ll get back to our regularly scheduled addictions after Halloween. Yes, this is where I live. Rather quaint don’t you agree? But you don’t have to worry that much because everything here is dead. Sorry about the smell. I guarantee that over time you’ll come to love the smell of pulp paper, dying willow trees, autumn mist and the cool unyielding surface of a marble headstone. Would you like to begin with the books? Naturally Lovecraft is pre-eminent amongst the authors whose shadows pace back and forth so restlessly in a room lit only by candles. That little fellow in the corner is Poe. He casts a long, withering shadow that often strangles other shadows. It’s one of his many unpleasant habits, but I can’t fault him for it. I rather enjoy the sound of bickering spirits. Clark Ashton Smith, Joseph Payne Brennan, August Derleth and Robert E. Howard have come to stay. If you don’t enjoy their company, then you’re not welcome here. What’s that you say? Yes, that’s blood on the floor. Why should I bother mopping up the blood when it adds such intricate Rorschach speculation to your consideration of the tiled floor? I knew a fellow once who insisted that I mop up the blood. That’s his shrunken head nestled between Norman Partridge and Joe R. Lansdale. I stitched his lips together using fishing tackle. I think Hemingway would have approved. All of the world’s dark places are collected here along with a few dark places of my own creation. I don’t expect you to approve. After all, bloody popcorn is the diet of vampires and ghouls. The dead feed on dreams of the living. You can count on that. When you entered this room you forfeited your right to sunny days and grandmother’s delicious apple pie. I serve platters of blazing six-shooters, galloping horses, strange winged creatures and memories of Lovecraft’s Cthulhu. Forry Ackerman and Chaney and Karloff and Lugosi all visit every year at this time. They’re quite a pleasant bunch. But I’m not sure who or what that is living in the corner. Its eyes change color every hour and it smells like offal thrown into the brine. Sometimes when I’m sleeping I can sense that it’s watching me. Meanwhile I have some experiments to conduct. Ygor has just brought me a fresh corpse. It’s a young and tender thing who died of apoplexy. I have plans for its spleen and liver. Its retinas will read stanzas from the Book of the Dead; its fingers will seek a fresh throat to crush. Something inhabits the darkness. It’s ancient and cold and thrives on fear. It knows what you’re thinking. It whispers arcane secrets using the books as a conduit. It’s funny, you see, because you thought Halloween was all about the candy and the plastic masks. How very naive of you. Now you’re about to click off this webpage when a shadow falls across your shoulder. You smell the fathomless sea and images swirl in your mind like bloody milk. You’re about to laugh self-righteously, smugly, when a paralysis grips your body. Then you see what it is that pursues you and you can’t move. Membranous wings beat slowly against your flesh and tendrils wrap themselves about you. Iä! Iä! Cthulhu Fhtagn!
Posted by Thomas McNulty at 5:46 PM No comments: 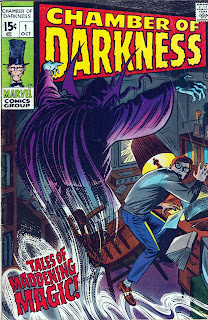 Marvel Comics were still making history with their groundbreaking super-hero stories when Chamber of Darkness was published. This was a better series than most people thought it would be, although it never achieved the acclaim that its creators had hoped for. I suppose the main criticism then as now being that the tales fell short of the stark terror and often gruesome images that made comics like Tales from the Crypt and The Vault of Horror such collector’s items. The stories lack that horrific punch and come across as watered down ghost stories for general audiences. I agree with that criticism, but I still found merit in the series. The first story, “It’s Only Magic,” is credited to Stan Lee and John Buscema, with Buscema’s artwork being the highlight. Lee’s story falls flat. It’s about a teenager who taps into some arcane literature and awakens a Djinn, but there’s nothing scary here. Buscema’s artwork captures a nice October mood. I enjoyed the next story, “Mr. Craven Buys His Scream House!” by Dennis O’Neil with artwork by Tom Sutton. This seven-page tale is about a bitter old man who wants to destroy a house, but can’t. This is the best story in the issue, made palpable by Sutton’s artwork. O’Neil’s story is good, but might have been better if it had been longer. The final story is fair. “Always Leave ‘Em Laughing” is credited to Gary Friedrich with artwork by Don Heck. A scientist, tired of being ridiculed, travels to the past where he hopes to gain respect, but instead he finds himself yet again an object of ridicule. All of the stories are introduced by Headstone B. Gravely (H.P. Headstone), a pale imitation of so many better sepulchral horror hosts. I enjoyed the autumnal feel to Chamber of Darkness, and I still love that first issue’s cover. Marvel was also publishing Tower of Shadows and soon, Chamber of Chills, in their effort to capture the horror comics market. The days of the truly great horror comics had passed, but as most of you know, Marvel Comics struck gold with Tomb of Dracula in 1972, a series that lasted only a few years but left a lasting impression. Chamber of Darkness lasted eight issues.
Posted by Thomas McNulty at 5:16 PM No comments:

The Haunter by R. L. Stine 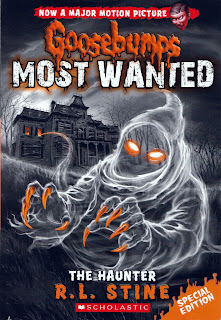 That remarkable fellow R. L. Stine is at it again. This time around he created a rather traditional haunted house story that’s campy, creepy and fun. It’s all about this kid named Sammy Baker who happens to be a bit shy. His problems are magnified when his friends decide to visit the Marple House, an abandoned mansion that’s reportedly haunted by a kid who was burned to death inside. Sammy meets “The haunter” rather quickly when he experiences a freezing sensation. To complicate matters, his school chums are not all that friendly, and Sammy takes the brunt of their practical jokes. Of course, there’s a girl he sort of likes, and maybe she even likes him, too, but Halloween is going to be a very long night, and Sammy isn’t convinced any of them will survive their visit to the Marple House. Stine is masterful at creating situations and characters that young readers can relate to, and that’s why his stories have remained popular for so long. Stine delivers the chills, suspense and youthful angst that his readers have come to expect. I just can’t let Halloween slip past without a nod to Stine who remains as creative and creepy as ever. The Haunter is great fun, but don’t let that fool you. This is still a ghost story with some delightfully scary moments. Read it at night when the doors are locked.
Posted by Thomas McNulty at 3:55 PM No comments:

An Evening With Boris Karloff and His Friends 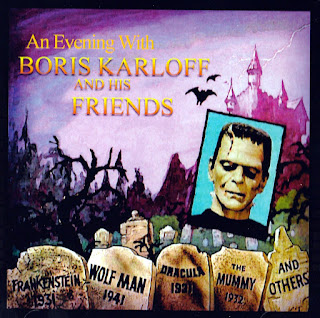 This album was released in 1967 and for many years was available through the back pages of Famous Monsters of Filmland Magazine. I don’t think people realize today that by this time Karloff was a cult figure for every kid in every neighborhood. His movies played constantly on television, and even then, over thirty years after its release, Frankenstein (1931) was considered too scary for kids and played predominantly on the late night television when we were all presumably in bed. Not a chance. Every kid in the neighborhoods across the country stayed up late and saw that movie. And it was scary! It scared the hell out of us. Karloff was creepy, Karloff was scary. Shortly before Karloff died in 1968 he was doing commercials, and in one of them he held up a bottle of sauce and said, “Experiment with it!” This album was given to me at Christmas, and I was thrilled. Years later I learned that Forry Ackerman wrote the script and Karloff recorded his bit in one take. The album is really a verbal tribute to horror films, punctuated by audio snippets from Frankenstein, The Wolf-Man, The Mummy, Dracula, and a few others. There is no in-depth analysis like the nonsense we see all over the Internet; no pretending this was anything other than what it was – a fond remembrance of great films. Karloff’s voice was perfect for the job, easily recognizable to every kid in the country. The audio from the films simply added to our desire to see and appreciate the films again. Long before video or DVD or Blue-Ray, we had limited television, record albums and radio. These days you can download all of this in a nanosecond. An Evening With Boris Karloff and His Friends is available on CD. Play it on Halloween, and let the Master take you back to an era of haunted castles, a mad scientist’s laboratory, an Egyptian tomb, or an autumnal forest where a wolf prowls the moors.
Posted by Thomas McNulty at 7:00 AM No comments: