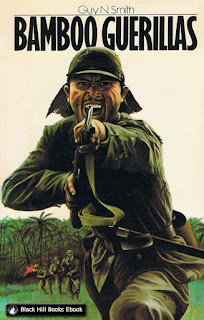 Bamboo Guerillas is a violent but entertaining story originally published in 1977 and available again as an ebook. Bamboo Guerillas is a World War II action tale about Hugh “Jungle” Carter who takes his men on a mission to save some nurses taken prisoner by the Japanese. Carter and his men decide to join forces with Li Chu, a murdering Chinese bandit who hates the Japanese with a passion. With Li Chu’s help they put together a force of men that are comprised of Chinese and Malaysian soldiers. Soon they learn that the nurses are being sexually tortured by Colonel Sika, a depraved commandant who enjoys watching prisoners copulate before having them bayoneted. I have to hand it to Smith, his villains are despicable and Colonel Sika is one depraved bastard. Bamboo Guerillas is often disturbing and readers will be eager to see justice done. There’s a lot of sex in the book, which isn’t unusual for any Guy N. Smith tale. Although Smith is best known for his horror and supernatural stories, Bamboo Guerillas falls into the category of “Historical Thriller” but in some ways it’s just as frightening as any of his spooky stories. He doesn’t waste any time in getting to the nitty-gritty, and you’ll be happy to be a reader and not a participant in this bloody tale. The transfer to ebook format is well done except for some irritating typos. The Guy N. Smith ebook library is available on Amazon or on Smith’s website which also offers autographed paperbacks of select titles.
Posted by Thomas McNulty at 7:11 PM