Lassie and the Mystery at Blackberry Bog by Dorthea J. Snow 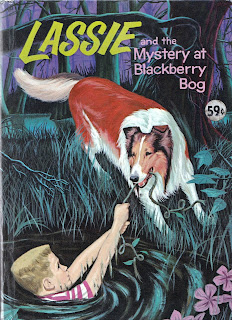 This 1960s Whitman tie-in coincided with the popular television show starring Jon Provost and June Lockhart. Lassie ran on television from 1954 to 1971 and the canine character also appeared in numerous feature-length films, books and comic books. There was a time when Lassie must have been the world’s best-known dog. Whitman Publishing had their glory days in the 50s and 60s, as I’ve noted in other posts, and their film and television tie-in titles were profitable books. I read several of the Whitman Lassie books and this one was my favorite. The interior illustrations were done by Ken Sawyer and I believe (but have not verified) that Sawyer created the fantastic wrap-around cover. As a young reader I was in love with mysteries and fancied myself an amateur sleuth. Author Dorthea J. Snow also wrote Lassie and the Secret of the Summer, and the novelization for Walt Disney’s Toby Tyler, along with many other titles. I recall reading this book as a child and enjoying the freshness and bright imagery of the prose: “Violets lay thick along the country road, and the green of the new leaves on the trees that formed a canopy over it was the fresh yellow-green of things young and tender and beginning anew. The red of barns and white of farmhouses made them look like bright jewels on green velvet.” This is a world where farm families have cherry pie for desert, the area boys brag about their shiny new bicycles, and the secret cave nearby is headquarters to the boy’s club, the Secret Order of Brave Knights, who are naturally dedicated to fighting evil. In emulating the American Dream depicted on television, author Snow manages to weave into her fabric some juvenile conflict that’s capped by a home-spun resolution. Lassie and the Mystery at Blackberry Bog offers a simplistic plot that idealizes the American way of life, and captures Lassie’s allure. Lassie really is the best dog in the whole world. Sadly, both Whitman Publishing and Lassie are now relics from another time. 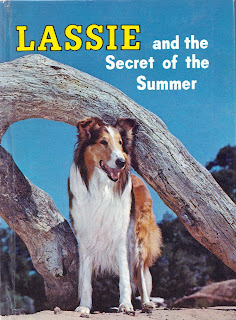 The Best of Spicy Mystery Volume 1 and 2 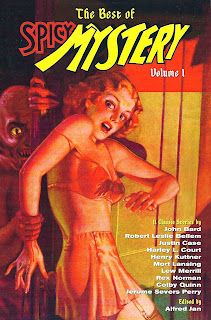 Editor Alfred Jan compiled the stories collected here all of which were originally published in Spicy Mystery magazine between 1935 and 1938. Spicy Mystery is legendary among pulp aficionados for stories and illustrations that often relied on naked or semi-nude women as enticements, wildly imaginative plots, and terse, hard-boiled writing. The collection was published by Altus Press in 2012. Being a fan of the pulps, I want to point out that reprint collections such as this, and facsimile reproductions of magazines such as those published by Adventure House, are absolutely vital in preserving this era of American entertainment fiction. The original pulp magazines have not aged well. Soon, they will all be untouchable, the pages too brown and brittle to handle. Reprints are vital, and they have become the new pulp collector’s items. The Best of Spicy Mystery Volume 1 is the perfect example of a modern collector’s edition. The eleven stories reprinted here (including the original illustrations) were chosen by Alfred Jan because they rise above some of the more mundane tales found between the covers of Spicy Mystery. The first tale, “Hell’s Archangel” by Henry Kuttner sets the tone for the moody tales that follow. The stories here are not only drenched in a moody atmosphere, but they clip along at a suspenseful pace. The other stories are: “Fiend’s Feast” by Robert Leslie Bellem, “Lorelei of Lynnwold Light” by Harley L. Court, “Murder from Nowhere” by Jerome Severs Perry, “The Second Mummy” by John Bard, “Mistress of Vengeance” by Justin Case, “Green Eyes” by Mort Lansing, “The Head of Mike Vasco” by Colby Quinn, “Bat Man” by Lew Merrill, “Mirror Magic” by Robert Leslie Bellem, and “Dance of Damballa” by Rex Norman. I always enjoy stories by Robert Leslie Bellem and both are good. I think the real forgotten gem in this collection is “Lorelei of Lynnwold Light” by Harley L. Court, a nifty haunted lighthouse story. The Best of Spicy Mystery Volume 2 offers another eleven stories, including two more by Robert Leslie Bellem, “Labyrinth of Monsters” and Taupoo Dance.” The other stories are “Cats of Cassandra” and “Castle Sinister,” both by Ellery Watson Calder, “She Who Was He” by Hugh Speer, “Blind Flight” by Clint Morgan, “The Secret of Old Farm” by Clive Trent, “I Must have 5 Corpses” by Jerome Severs Berry, “False Face” by Carl Moore, “Red For Murder” by Cary Moran and “Flesh of the Living” by Clark Nelson. These two volumes showcase the hardboiled allure of pulp fiction, and some of the lesser known but equally entertaining writers. 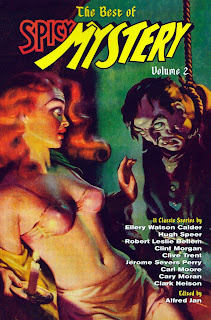 Posted by Thomas McNulty at 5:41 PM No comments: 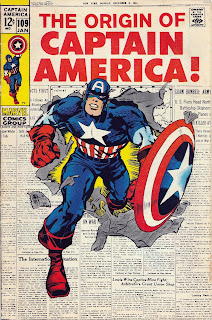 There are numerous landmark Marvel Comics from the 1960s that historians and fans alike applaud as groundbreaking publications. Fantastic Four # 1, Amazing Fantasy # 15, Avengers # 4, and so many others. For me that landmark moment came with this one from January, 1969. By this point I was reading The Amazing Spider-Man, Daredevil, Iron Man, and The Fantastic Four regularly, dependent on what money I could make mowing lawns. Captain America # 109 blew me away. This re-telling of Captain America’s World War II origin is a powerhouse story. This is the type of storytelling and artwork that distinguished Marvel from all other comic book companies. Cap has been visited by Nick Fury and reminisces about the war, how he was transformed from being a scrawny kid from the Bronx to a Super-Soldier. Most telling here is the emotional impact when he talks about losing his partner, Bucky Barnes, in combat. Page 8 is a full panel, with Cap reminiscing and Nick Fury thinking to himself: “Man! Is he carryin’ a king size chunk of memories inside’a him!Ya can almost see the past comin’ back – wrappin’ itself around ‘Im – trapping him like it always does…” This is the depth of characterization that Stan Lee and the other writers were able to create, and for Cap it was tied directly to the fact that he’s a man out of time, a relic of a bygone age and fading ideology, plunged headlong into a frightening new world of swinging 60s cultural upheaval and wildly dangerous new adversaries. Captain America # 109 bridges the generation gap. Even though Cap represented the establishment, his angst and turmoil struck a chord with readers. Cap is the unlikeliest of heroes for the anti-establishment 60s. The artwork by Jack Kirby, inked here by Syd Shores, is truly masterful. This is Jack Kirby and sequential comic book art at its very best. Captain America may have been trapped in an ice-flow for several decades, but he’s still a Super-Soldier. Look at these panels carefully, and you’ll believe that Cap can kick Superman's and Batman’s ass at the same time. It almost reads like a filler issue, something they put together simply to bring readers up to date on Cap’s origin while Lee and Kirby plotted additional adventures. This is my favorite Captain America comic book. The flashbacks to the war are stunning, and Cap is poised on the brink of adventures in a terrifying new world. Over the years, other writers and editors tweaked Cap’s origin, revised it, brought Bucky back, and in so doing diminished the carefully wrought characterization that gave Steve Rogers such complexity. See my missive in “Letters to a Living Legend” in Captain America # 221 (May, 1978) where I ranted against revisionist history. They should have left well enough alone. Still, comic books are like soap operas, and the twisted plots and dramatic changes all make for some entertaining reading. The characterization and visually stunning artwork that Stan Lee and Jack Kirby created for Captain America # 109 stands as a masterpiece among many Marvel masterpieces. 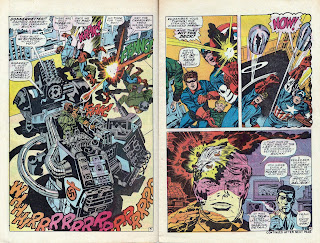 Posted by Thomas McNulty at 6:22 PM No comments: 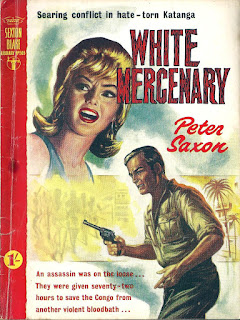 This post is updated 8-8-16 with special thanks to Keith Chapman.

This August, 1962 Sexton Blake adventure features cover art by Henry Fox. According to Keith Chapman, "White Mercenary was written by veteran genre fiction writer Sydney J. Bounds. For better or worse. It was put through the Baker/G. P. Mann "rewrite" process, then published under the "Peter Saxon" house-name byline. You can read more about the highly competent and experienced Syd in the articles "Detectives in Cowboy Boots" and "Farewell to a Small Giant"(www.blackhorsewesterns.com/bhe5)."

This is Sexton Blake as I encountered him in the American paperbacks credited to W. A. Ballinger; a tough yet somewhat cerebral man-of action. This time, Blake is solicited by an old friend to prevent the assassination of a political leader in the African Congo nation of Katenga. With only seventy-two hours before the assassination will take place, Blake and his assistant, Tinker, are thrown into a maelstrom of red herrings and conflicting motivations. Among these diversions are a shapely lass named Crystal, and a blonde named Angela De Villiers who keeps Splash Kirby, special correspondent to London’s Daily Post, and long-time friend of investigator Sexton Blake, occupied with their considerable feminine charms. Meanwhile, Simon Trois, a mysterious player in Katenga politics, shows up, and soon Blake, Tinker and Kirby are trying to unravel a complicated relationship that not only involves Trois, but Katenga president Tshombe. White Mercenary runs at a fast pace, with short chapters (seventeen total chapters) and most of the action taking place near the conclusion. Peripheral characters flit in and out as the plot dictates. Being a fan of the many authors who wrote under the Peter Saxon pseudonym, not to mention the Sexton Blake stories in the late 1950s and through the late 1960s, I enjoyed White Mercenary. The writing is strong, the tension level is consistent, and it all wraps up as you might expect. For collector’s this is Sexton Blake # 505.
Posted by Thomas McNulty at 11:01 AM No comments: