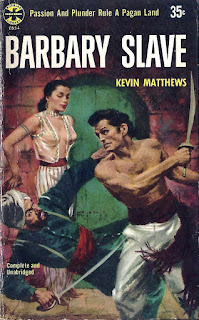 This thin 1955 paperback from Popular Library is only 143 pages long but offers an unstoppable and exciting adventure. The first sentence sets the tone for the swashbuckling fun to come: “The late afternoon sun made a white splendor of the city that lay sprawled across the low, sloping sands of the African coast.” You’ll be drawn in to an exciting world of pirates, harem beauties, sword fights and ships at sea. The great Gardner Fox wrote Barbary Slave under the Kevin Matthews pseudonym. I am not an expert on Gardner Fox, best known to me as the mid-1960s scribe on the Flash and Hawkman comic book series. I have read a few of his novels and enjoyed them, except for his “Lady of Lust” paperback series in the 70s (under the pseudonym Rod Gray). Those didn’t click with me because they felt rushed. Still, when I see old paperbacks with his name on them I always buy them. I am certain to have read others published under a pseudonym without knowing it was his. Barbary Slave is fun. After being captured by pirates, Stephen Fletcher is enslaved and given the daunting task of protecting the queen and the other girls in the harem. But the queen, Marlani Chamiprak, lusts after Fletcher. She taunts him, forces him to watch her and the other harem girls bathing, fanning the flames of his manly desire. Meanwhile, Fletcher plots his escape after learning there may be American frigates off the coast of Tripoli. Knowing that cavorting with Marlani or any of the girls will mean certain death, Fletcher is careful to keep his boiling passion in check. But then an enslaved American girl named Eve Doremus is brought into the harem and Fletcher falls for her voluptuous charms. Intent on securing freedom for them both, Fletcher plans carefully for the day he can strike back and win their freedom. With enough action to counter-balance the sinewy romance and harem intrigue, the plot boils over at times before gasping toward its conclusion. This was a great old paperback to read, and it lives up to its cover blurb: “Passion and Plunder Rule a Pagan Land!”
Posted by Thomas McNulty at 5:28 PM