The Forgotten Room by Lincoln Child 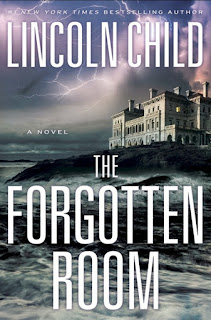 Jeremy Logan, an “enigmalogist” who specializes in solving mysteries that often border on the supernatural, returns in this quirky and impossible-to-put-down page turner. I purchased the hardcover for this one, but the book is now available in paperback. Lincoln Child has written yet another exciting adventure story. There are some plot elements here that are reminiscent of some pulp science fiction tales, but Lincoln Child makes it all seem plausible. After the presumed suicide of an old colleague, Logan ventures to Newport, Rhode Island where cadres of scientists are working on their programs inside an old complex that borders the sea. The erratic behavior of several members, in addition to Logan’s sense that other, sinister forces are at play here, lead him into a labyrinthine maze of intrigue and terror. When he discovers a forgotten room, sealed for decades, he search focuses on some scientific apparatus that may very lead him to his own grave. What were they experimenting with and why is it relevant today? The elements of fantastic fiction, scientific secrets, and deceptively tangled web of those interested in exploiting those secrets for their own benefit, rushes along at a pulse-pounding rate. Lincoln Child is on his game with The Forgotten Room. His previous Jeremy Logan adventure, The Third Gate, is also still available in paperback. As most of you know, Lincoln Child also writes novels with Douglas Preston. All of their books, either solo novels such as this one, or their co-authored titles, are worth your time. The Forgotten Room should make your list of best recent thrillers.
Posted by Thomas McNulty at 6:51 PM