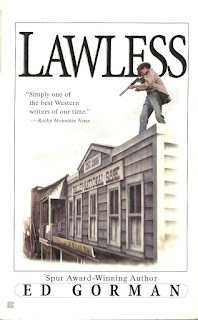 I am long overdue in discussing an Ed Gorman novel on this blog. There was a time when he had books coming out from Leisure and Berkley and I bought whatever I could afford. If any of you are ever fortunate to meet my wife, she enjoys telling a story about giving me “lunch money” when we were first married (over thirty years ago) and then discovering I wasn’t eating lunch. You’ve already guessed what I did with the money. That’s right – the paperbacks piled up. They continue to pile up. Gorman is one of my favorites. Lawless dates from 2000, published by Berkley, a tough western. Gorman writes with an economy of style that still fully realizes the scenes, dialogue and characterization. His westerns are always rugged, exciting page-turners. Sam Conagher grew up wanting to be a train robber. But when he meets up with Earl Cates he ends up in Yuma prison. Fast forward a few years and once out of prison Conagher drifts about until he discovers that Cates is now the sheriff of a town that doesn’t much care about his past. Conagher isn’t certain if Cates on the level now. Subplots involving past loves and a new love add a rich texture to the story. Something else is cooking in the town of Templar, and Conagher soon discovers he doesn’t much like it. I don’t like revealing extensive plot details, but I can say that Lawless didn’t play out the way I expected. The fate of two characters – Nora and Callie – came as a surprise. Track down a copy of this one and you’ll see what I mean. These days I don’t have to worry so much about lunch money, and I’m glad I picked this one up. Lawless falls into the category of being pretty damn good.
Posted by Thomas McNulty at 6:04 PM