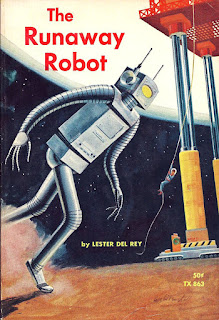 This 1967 Scholastic paperback appeared during a time when television shows like Star Trek, The Outer Limits and Lost in Space were helping to introduce another generation to science fiction. The cover by Wayne Blickenstaff fit right in to the concept of exploring new worlds, talking machines, and alien adventures. Lester del Rey had established himself as a writer of pulp stories years earlier, and Scholastic was publishing quality reprints or soliciting new novellas to fatten their catalog. The Runaway Robot is a solid story, fondly remembered. As a kid I was mesmerized by it, and as an adult I enjoyed the novel’s intelligent structure and solid writing. The story plays into the set-up from Lost in Space, the adventures of a young boy and his robot friend. Paul, at sixteen years old, was born and raised on Ganymede and learns that his family is about to relocate to earth. Paul and all of those colonists born on Ganymede have long dreamed of going to earth where humanity originated. The problem is Paul won’t be allowed to bring Rex the robot with him. Rex is Paul’s best friend and he can’t imagine living without him. His tribulations are at the heart of this novel, which holds up well. The Runaway Robot is out of print. Lester Del Rey wrote a few really tight “juvenile” thrillers like this one. In other posts I have mentioned the viability of these mid-60s books from Scholastic so I’m adding this title to my list of Scholastic books worthy of a re-discovery.
Posted by Thomas McNulty at 7:00 PM