The Greatest Superman Stories Ever Told 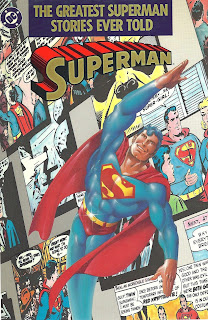 This 1987 hardcover from DC comics is hardly definitive, but it’s still a great book. Best of all, the stories are reprinted in full color. I might quibble with some of the choices, but the collection really has more positive points than negative points. The first five stories are from the 1940s, and we’re treated to the first Lex Luthor tale, another one with Mr. Mxyztplk and the origin of Superman from 1948. That’s a marvelous way to start the book. The next six stories are from the 1950s and we have Supergirl, Bizarro, and a few minor entries. The 1960s are represented with the classic three-part epic, “The Death of Superman.” Otherwise, the 1960s get slighted here. The collection gets back on track with a reprint of artist and writer Jack Kirby’s The Forever People # 1 co-starring Superman. It was the swinging 70s and Jack Kirby could not have been more popular. Looking at those panels today still fill me with excitement. I don’t think the executives at DC really knew what to do with such a powerhouse talent like Jack Kirby, but I’m no historian, just a fan. I do know I loved the books. Included also is the classic Elliot Maggin story “Must There Be a Superman?” from Superman # 247 in 1972 with artwork by Curt Swan and Murphy Anderson. The final two entries are self-serving for DC executive because they were, at the time, of recent vintage, but they’re still fantastic stories. The next tale is “For the Man Who Has Everything” by Alan Moore and Dave Gibbons, and remains, in my super-fan opinion, the best Superman story from the 1980s. The final story is “The Secret Revealed” by writer and artist John Byrne whose much ballyhooed albeit short tenure with Superman left a lasting, positive impression. This book’s one major fault lies in the cheap sewing and glue on the binding, which cracks easily and loosens the pages. I’ve never bothered with the paperback reprint, but this hardcover is easily located in after-market venues.
Posted by Thomas McNulty at 8:47 AM