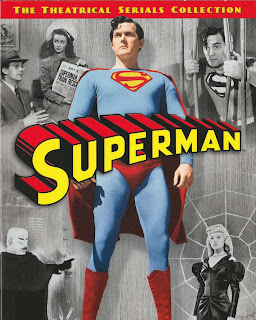 Hollywood was a strange place in 1948. On the eve of the Cold War many studios were still trying to recapture the pre-war enthusiasm that made movie serials a profitable venture. B-movies and juvenile entertainments were treadmill, low-budget productions that satisfied the masses while turning a dollar. There was no better character to bring to the screen as a weekly serial installment than Superman, the greatest pulp fiction hero of them all. Kirk Alyn landed the role and so became history’s first celluloid Superman. The fifteen serial Superman (1948) also featured Noel Neill as Lois Lane. The 2006 DVD restoration is a delight for all of us Superman fans. The film to DVD transfer is excellent. 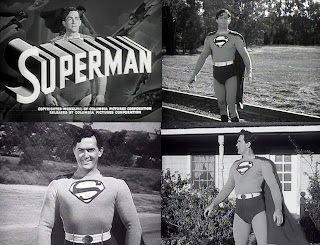 This is cornball stuff, but delightful in the way that many such items of nostalgia are appealing. It doesn’t have to be film noir or an Ingmar Bergman film to be entertaining, and, frankly, Kirk Alyn is solid as the Man of Steel. The premise repeats Superman’s origin, his rocket from Krypton being discovered by the Kents, his introduction as a reporter for The Daily Planet and working with Lois Lane and Jimmy Olsen. The major villain is the nefarious Spider Lady and who employs a relativity reducer ray to plague Superman. The flying sequences are animated. This mixture of live action footage and overlapping cartoon sequences works better than it should have. 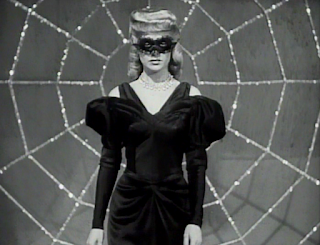 With a target audience of ten year old boys, Superman is a popcorn movie all the way. Looking at it today, I’m impressed by the breathless feel to the action. Contrary to popular opinion regarding B-movies and film serials, the creators did have a passion for their material, and all of the principal players work hard at their craft. Carol Forman plays the Spider Lady as a platinum bombshell with a sinister side (platinum blondes were trendy at the time), and Noel Neill shines in her first outing as Lois Lane. Tommy Bond plays Jimmy Olsen with a bit of a harder edge than was possible for Jack Larsen, who became indelibly associated with the role on television. Superman has it all: gangsters and gun-molls, a science fiction backdrop, back-lot sets, breezy southern California exterior shots, and an eternal feeling of optimism. 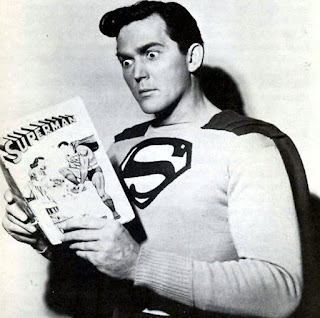 Kirk Alyn is excellent as Clark Kent, and rarely plays him as the timid scaredy-cat cliché that would later dominate the series. Kirk Alyn’s Clark Kent is not far removed from the George Reeves characterization where Kent is equally as reliable as Superman. In fact, Christopher Reeve would be the first actor to portray Clark Kent as the stereotypical “timid” reporter, a full thirty years after Kirk Alyn. Alyn himself wasn’t given screen credit, although his name does appear on the posters. This was a publicity gimmick. Columbia Pictures announced they couldn’t find an actor to play Superman, so they hired Superman himself. The 1948 Superman makes for a great starting point for any Super-fan.

As a follow-up to the highly successful fifteen-part serial, Superman, Columbia Pictures produced a sequel in 1950, Atom Man Vs. Superman. Equally as entertaining as its predecessor, this time around the villain is none other than Lex Luthor, played with oozing menace by Lyle Talbot. Tommy Bond returns as Jimmy Olsen, and once again the swift pacing and earnest players make this a must-have in every Superman collection. Watching an old film serial today always reminds me that southern California really is the perfect place for exterior locations. Any side road, highway or park will suffice. Back-lot streets get the job done. The animated flying sequences are identical to the first serial. This is Noel Neill’s second outing as Lois Lane. I’ve met Noel several times and I interviewed her years ago. She’s a sweetheart. In this installment, Lex Luthor is behind the mysterious flying saucer that threatens Metropolis with an atom bomb. Atom Man Vs. Superman has a strong science fiction plot whereas the first serial was a combination of science fiction and pulp fiction villainy. Having both serials on DVD is a treat. These serials can still entertain kids today, and there’s no reason why they shouldn’t be shown. I was thrilled to add this DVD set to my Super-collection. 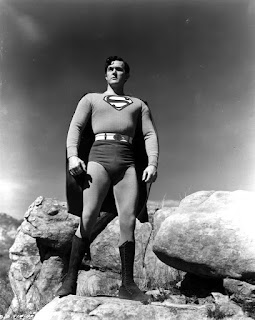 Posted by Thomas McNulty at 8:16 AM