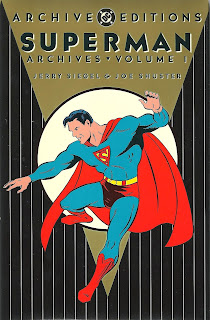 Published in hardcover in 1989, the DC Archives series were expensive but high quality reprints of the original comics, and volume one reprinted the first four Superman comic books. With an introduction by Jim Steranko, this first book is crucial for any Superman collector. These original stories by author Jerry Siegel and artist Joe Schuster set the foundation for the greatest pulp hero of all time. Although Superman originally appeared in Action Comics, he quickly received his own banner series, and these early tales introduced the basic elements of the Superman mythology. Superman was a Depression-era champion of justice who never shied away from a bully, could leap over skyscrapers, outrun a speeding locomotive, and best of all, bullets bounced off his indestructible skin. The S symbol on his chest stood for one thing – Superman! The first panel of Superman # 1 gets right to the point: “Just before the doomed planet, Krypton, exploded to fragments, a scientist placed his infant son within an experimental rocket-ship, launching it toward earth.” Thus begins an iconic science fiction tale that would undergo numerous embellishments and remain for several decades the “Number # 1 Best-Selling Comics Magazine.” These early stories are crude in comparison to modern comics, but the energy and excitement is all there, and Jerry Siegel and Joe Schuster’s enthusiasm for their character is evident in each panel. Lois Lane is here, and Clark Kent works for The Daily Star, and Luthor shows up in Superman # 4 (without the “Lex” and with hair). The emphasis is often on physical fitness and in promoting a moral code; all typically American ideologies at a time when such things were blatantly promoted without fear of reprisals from special interest groups. I suppose in one sense a history of Superman comic books offers a survey of American cultural anthropology for over seventy-five years. These stories are vital in understanding Superman’s ongoing quest for Truth, Justice, and the American Way. 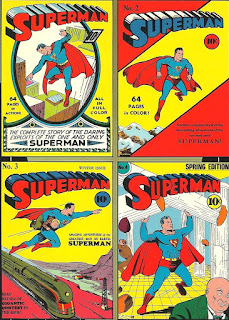 Posted by Thomas McNulty at 6:30 PM