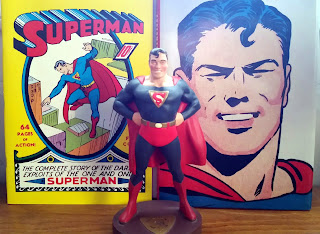 This 1999 collector’s edition hardcover came in a box set with a full-color reproduction of Superman # 1 in addition to a commemorative statue based upon pencil sketches by Alex Ross and cast by Joe DeVito. This box-set is known as the Superman Masterpiece Edition and is highly sought-after by Superman collectors. Essentially, a history that acknowledges the pulp fiction era that nurtured Superman’s creation by author Jerry Siegel and artist Joe Schuster, the many full-color photographs are a treat. Author Les Daniels covers Siegel and Schuster’s formative years, and includes a section on the now highly revered Max Fleischer animated films from the early 1940s. Fleischer’s influence on Siegel and Schuster, and on the Superman mythology in general, is profound. Also included is an overview of the many Superman collectables from that era, The Supermen of America Club, and the great Kirk Alyn movie serial that is seldom seen, albeit still available on DVD. This period throughout the 1940s, and especially the Max Fleischer cartoons and the Kirk Alyn film, are given full credit for their influence on Superman. This influence would have a direct impact on the now famous 1950s television show, The Adventures of Superman, starring George Reeves. That show isn’t covered here because this book’s focus is on that period from approximately 1938 to 1948, the real Golden Age. The dust jacket is simply a color reproduction of Superman’s face and S insignia, while the hardback itself is embossed with a photograph of Kirk Alyn’s costume from the Superman serial. Kirk Alyn wrote the book’s introduction. This book is another must-have for Superman fans.

Posted by Thomas McNulty at 8:57 AM