The Glory Jumpers by Delano Stagg 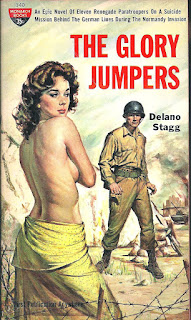 I love the cheesy cover on this 1959 paperback from Monarch Books. I also think Delano Stagg is a great pseudonym. The copyright page lists Mel R. Sabre and Paul Eiden as the authors. The cover is intentionally misleading. Monarch Books specialized in sensationalist paperbacks and the covers rivaled the alluring titles from Beacon. There is nothing sexy about The Glory Jumpers. This is a brutal, hard-boiled story about men in combat. The sex scenes are nominal and hardly erotic. It’s a damn good book and the type of post-war prose about combat that was once standard material for the so-called “men’s paperback” market. The cataclysmic events of World War II had an immediate effect on writers and artists of all types. The best known novels of the post-war era are The Naked and the Dead by Norman Mailer and The Young Lions by Irwin Shaw, both published in 1948. I prefer Shaw over Mailer. Dozens of paperback titles became modest best-sellers, only to fall into obscurity. Does anyone out there recall The Reef by Keith Wheeler? Then we have the men’s pulp magazine market which exploited every aspect of combat in wildly divergent ways. I don’t know if there exists any qualified academic study of the war fiction that flooded the market until the early 60s, but that strikes me as a fascinating project for anyone willing to tackle it. The Glory Jumpers resembles The Dirty Dozen. The plot will be familiar to all of you: Eleven men picked from the Army stockade are sent to do a dangerous job behind German lines. These include Reb and Swampy, two hillbillies, a beatnik character named Cadillac, the cruel Sergeant Nolan, the idealistic Dana, and a killer named Sergeant Mungo. Other characters offer support but add little depth. The six primary characters carry the storyline. As you would expect, many of them don’t survive the narrative. I like the matter-of-fact style to the prose. There’s not a smidgen of sentiment to be found. Mailer and Shaw’s influence, and maybe even a dash of Hemingway, is obvious. Stories like The Glory Jumpers bridged the gap between objective journalism and creative fiction. It comes across as a straightforward account of war with all of war’s horrific blemishes visible. The Glory Jumpers is a great piece of war fiction.
Posted by Thomas McNulty at 9:54 AM 2 comments: 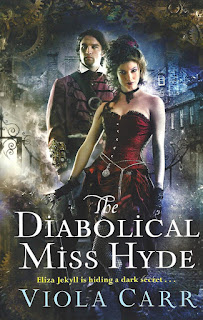 Steampunk is a sub-genre of science fiction, the origins of which are occluded by expert opinions, ranting egotism, and fractured ideology depending on whom you talk with. Did steampunk begin as a “cosplay” trend? And cosplay – or “costume players” – which became fashionable at conventions, is hated by many and loved by more. My humble opinion on all of this is simple – I’m in favor of anything where people are having fun. Anyway, allow me a moment to adjust the steam-fueled auto-gyro in my medulla oblongata – hisss! chink! plonk! pfssttt! clank! – ahh, that’s better. Miss Viola Carr has written an excellent steampunk novel. The Diabolical Miss Hyde freely borrows characters and elements from Robert Louis Stevenson’s Dr. Jekyll and Mr. Hyde while putting a fresh spin to it. Touted as an “Electric Empire Novel,” The Diabolical Miss Hyde exists in a steam fueled Victorian world that might have been developed better, but the fast-pacing makes up for the lack of world-building. Of interest here is the character of Dr. Eliza Jekyll, daughter of the late Henry Jekyll. Eliza also appears in this extravaganza as Miss Lizzie Hyde. Oh that Lizzie is a naughty girl! She’s the opposite of Eliza in every way. When Eliza begins investigating a series of murders by The Chopper, she meets the handsome Captain Remy Lafayette, an investigator for the Royal Society, and sparks fly between the two. Captain Lafayette is attracted to Eliza, but will Lizzie be the one that has all the fun? As it turns out, Captain Lafayette has a secret of his own, but readers will need to plod through some sinister plots before they find out what that secret is. The last third of The Diabolical Miss Hyde has all of the plot twists that you can possibly shake loose in a melodrama. Sometimes predictable, but infused with some lively characterizations, I enjoyed The Diabolical Miss Hyde to the point where I have already purchased the sequel, The Devious Dr. Jekyll. The back cover photo of author Viola Carr makes me wonder if she isn’t a devious cosplayer herself. She looks like she’s having as much fun as Lizzie Hyde. The Diabolical Miss Hyde is this month’s recommended fix for the literati.
Posted by Thomas McNulty at 9:18 PM No comments: 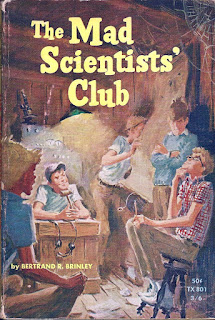 Sitting down and thumbing through this December 1965 first paperback printing of The Mad Scientists’ Club by Bertrand R. Brinley brought back a lot of fond memories. I had printed my name across the title page and the word “4th” which was the grade I was in. I don’t know why I was documenting my school progress, but I noted my elementary school grade in all of the Scholastic Books I purchased through the 5th grade. Of all of those books this is the one people recall frequently. Today, there are some Internet sites devoted to this book and its author. I’m not surprised. The Mad Scientists’ Club was special. A collection of seven stories, several of which originally appeared in Boys’ Life magazine (yet another relic from my boyhood), Brinley had created a world that was immediately a point of nostalgia, and not unlike the town and inhabitants of Mayberry from television’s The Andy Griffith Show. With illustrations by Charles Geer, The Mad Scientists’ Club inspired a generation of junior geniuses and rambunctious eggheads while encouraging the formation of similar clubs in hamlets and small towns across the country. This book’s appeal is endless. The first story, “The Strange Sea Monster of Strawberry Lake” is typical of the boyish fun. You see, Dinky Poore made up the story about the monster when he was late for supper one day, and while his parents were skeptical, his impressionable sisters spread the story around. Pretty soon the local newspaper published an “artists conception” of the creature, which got Henry Mulligan all excited. Mulligan, vice-president and chief researcher for The Mad Scientists’ Club suggested they build the creature. So Mulligan, along with Dinky, Freddy Muldoon, and Jeff Crocker (club president) make the creature with canvas wrapped over a canoe and set sail on Strawberry Lake. Assisting them are Mortimer Dalrymple (electronics wizard) and Homer Snodgrass. Hilarity ensues, and all these homespun boyhood fantasies offer a slightly madcap tone with a gosh and gee-whiz tongue-in-cheek attitude. The other stories are “The Big Egg,” “The Secret of the Old Cannon,” “The Unidentified Flying Man of Mammoth Falls,” “The Great Gas Bag Race,” “The Voice in the Chimney,” and “Night Rescue.” Scholastic published a second collection, The New Adventures of The Mad Scientists’ Club, in 1968. I believe these books are still in print.
Posted by Thomas McNulty at 6:48 PM 2 comments: 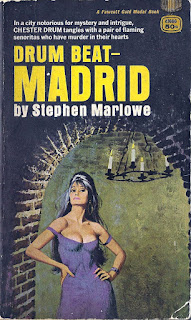 Stephen Marlowe was a pseudonym for Milton Lesser. Lesser also published numerous science fiction stories under his own name and I’ll be reviewing some of those soon. He wrote a great many novels featuring Chester Drum, an investigator based in Washington DC. Drum Beat Madrid is one of the later books (1966)) and published by Fawcett. I prefer Edward S. Aarons over Marlowe, but Marlowe had some good moments, too. Drum and his friend Axel Spade are in Madrid where Spade is entertaining matrimonial ideas. Their host, General Santiago Sotomayer, is an unpleasant chap to begin with. Then a girl is kidnapped and Drum and Spade appear to be the best solution. Add to the mix twenty million dollars in Spanish gold gone missing, too, along with some snooping Russians, and the intrigue level rises exponentially. Drum Beat Madrid is a bit convoluted and a few chapters longer than it should have been. What I enjoyed most were the introspective passages that Drum tosses out (the book is a first-person narrative) because they added some depth and some color. Here’s a great passage from chapter twenty-three: “Fiestas...You drink too much and sleep too little and there are the seductive pleasures of dancing in the streets and the hissing streams of chalky Spanish wine from the goatskin bags, and because everyone is poised on the thin edge of self-control you can, at the drop of a casual remark, fight a man or seduce a woman.” There’s a touch of history here with Drum’s relationship with Pamplona which echoes Hemingway. Drum Beat Madrid is light on action and Drum doesn’t even have his .357 magnum this time around. I’ve found that Stephen Marlowe’s Chester Drum books vary dramatically in quality. Drum Beat Madrid was good enough to keep me interested, but what I came away with was this sudden desire to visit Pamplona and drink wine from a goatskin bag while flirting with exotic women. Well, what’s wrong with that?
Posted by Thomas McNulty at 8:05 AM No comments: 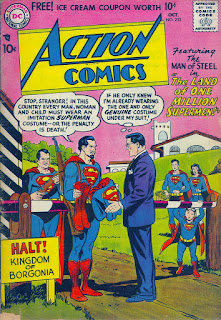 Happy New Year!
Welcome to “Dispatches From the Last Outlaw”
and 2016 is off to a Super start!

There was a time when Superman’s costume was an iconic and respected symbol. The familiar “S” insignia did indeed stand for Superman and his red, blue and yellow costume stood for truth, justice and the American way. I remember as a young boy drawing the S symbol time and time again. To draw the S symbol the way it was shown in the comic books was a big deal. Artist Wayne Boring was the predominant penciler of Superman during the 1950s and into the 1960s. Boring’s rendition of the S insignia became the standard, although Curt Swan, who drew the cover shown here for Action Comics # 233, will be remembered correctly as the definitive Superman artist. The story is titled “The Land of One Million Supermen” and the Curt Swan Stan Kaye cover is a classic. When inadvertently landing in Borgonia, Superman discovers the citizens are all wearing replicas of his super-suit. Their Superman outfits are identical in every way except, of course, they’re not indestructible and the cape’s insignia is colored in both red and yellow, whereas Superman’s original cape has a solid yellow insignia. Once the costume gimmick is explained the story focuses on a corrupt politician that plays out in the usual manner, i.e.; Superman manipulates a satisfactory conclusion. Written by Jerry Coleman, “The Land of One Million Superman” is a contrived but harmless tale, perhaps known more by its great cover than anything else. This issue also features a Congo Bill story written by Jack Miller and drawn by Howard Sherman; and a fun Tommy Tomorrow tale written by Otto Binder and drawn by the great Jim Mooney. 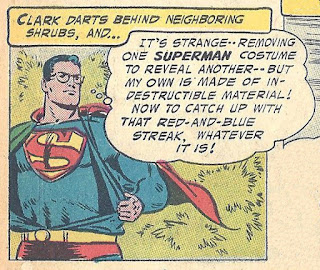 Posted by Thomas McNulty at 8:02 AM No comments: