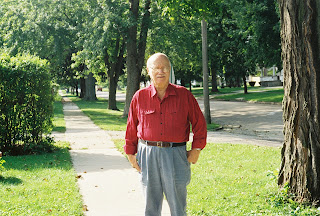 My friend the poet Dave Etter passed away on Friday July 10th. Dave was a great writer and friend to all who met him. He had a profound, positive effect on my life from the time I first met him in the mid-1970s. I have slightly revised this article I wrote about Dave and I’m posting it here a tribute to not only a friend, but an American original. 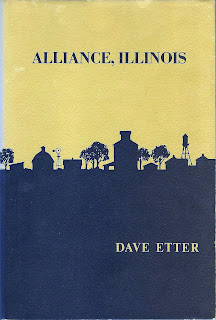 For over forty years Dave Etter was creating poetry that belongs intrinsically to Illinois. His poems are inhabited with characters from the cross-section of the State's population: blue-collar laborers, housewives suffering the blues, angst-ridden teens, and struggling farmers. He claimed he never wrote about real people, but like many writers, his creations were pieced together with a generous sprinkling of reality tempered by a dash of imagination. Etter’s first book, Go Read the River was published in 1966 by the University of Nebraska Press to instant acclaim. His poems were noted for their sharp images and singular eloquence that captured the spirit of life on the Great Plains. Etter wrote about the common people struggling to find their places in the grand scheme of things. Widely anthologized, “"The Hometown Hero Comes Home,” touched on a soldier's alienation:

The Jewish woman who sits next to me
Sheds tears for a son, dead in Vietnam.
Her full lips are the color of crushed plums.
I want to go off with her to some lost
Fishing village on the Mississippi
And be quiet among stones and small boats.


Two years later he published The Last Train to Prophetstown and never looked back. A succession of volumes followed, some of the titles reflecting a sampling of life in Illinois and the surrounding Midwest: Crabtree's Woman, Bright Mississippi, Riding the Rock Island through Kansas, Cornfields, West of Chicago, Boondocks, Home State, and Midlanders. He published in every conceivable magazine that accepts poetry, and contributed to over 100 anthologies and textbooks. By the early 1970s Etter was known for his readings. He won a half dozen awards, including the Carl Sandburg and Society of Midland Authors poetry prizes. Born in California in 1928, Etter graduated from the University of Iowa and began traveling across the country after a stint in the army. He explored America's backroads in those pre-Beat Generation days before the bohemian subculture became part of the mainstream literati. Several visits to Chicago convinced him that Illinois was the place to settle. “I write mostly about people.” Etter told me, “But fortunately I’m very much a Midwestern writer. That’s why I moved here more than forty years ago. When I first started writing, I can’t tell you how happy I was just to write the word 'cornfields,' and to get into the names of rivers and all that kind of thing.” 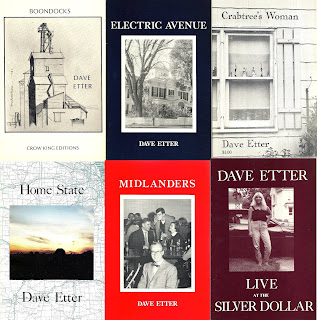 His best known book, Alliance, Illinois, was based in part on his experiences living for many years in his adopted hometown of Elburn, Illinois. Each poem is told by a resident of the fictitious town of Alliance in Sunflower County. A three line poem told by “Kermit Olmsted” and titled “Roots” sums up Etter's feelings for the Land of Lincoln: 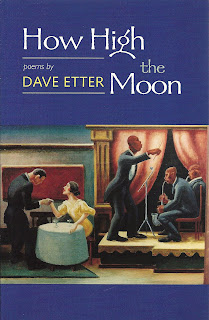 In all of his work, Etter is a writer with an ear for sound, an eye for color, and a love of place and time. In a poem titled “In the Middle of the Middle West” he describes his companions and friends as “The roads, the farms, the good folks who live on those islands in the corn…” At his poetry readings, he was composed and straightforward. There was nothing of the flamboyant performance poetry so common today with the coffee-shop crowd. “Well, first of all, I write syllabic poetry.” He continued. “I believe that every poem of mine should be measured in some way. Sound and rhythm are very important to me and I fiddle with these until I get what I want. The subject matter of the poem dictates my word choice, the pattern of the lines and stanzas – if any – the prevailing mood, the attitude of the speaker or speakers, and so forth. I try to use the relaxed, laid-back approach to writing poetry. I like to give the impression that my lines come easily and effortlessly. No tortured syntax, no trumped-up obscurity, no five dollar foreign words, no hokey sentimentality. No pain, no strain. Of Course the real truth is that I must labor hard and, often, long before I am satisfied. I want my poems to sound like Eric Clapton’s music, especially his earlier songs. Listen to his “Knockin’ on Heaven’s Door” or “Wonderful Tonight” and you will hear what I strive for.”

The River waters my dusty eyes.
Stray-dog sunlight tongues a pale petal
That is shaped like a gambler’s hand.
Thunder booms in the west
And all the sailing clouds come home.
— from “Up the Illinois River" 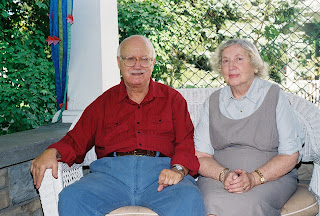 “I want the poem to sound good when I read it.” He said. “I want the sounds and rhythms to be right. It really helped when I first started reading poems because I’d read a poem and if a certain line didn’t sound just right or didn't seem to fit, I’d make a mental note to fix it or at least look at it.” How High the Moon thematically follows the course he tracked in Go Read the River. Spoon River Poetry Press recently published The Essential Dave Etter in paperback, compiling a sampling of his best work in one accessible volume. In 2004 he published Looking for Sheena Easton and The Liontamer's Daughter: Poems of Humor and Satire followed in 2008. 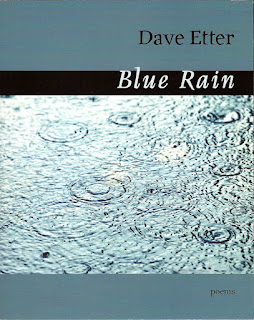 “A lot of the writing comes from not doing anything. I remember a writer telling his wife when he was just sitting around and she asked ‘What are you doing?’ And he said ‘I'm working.’ And she laughed. She didn’t believe him so he had to explain it to her. People don’t get that; they don’t realize that thinking is so important to the arts. You have to think to paint, to write music and so on. Think it out first or otherwise you don't know where it’s going. I generally start out with one line and think it through. When Dylan Thomas was in a bar he might hear somebody say something interesting, and he’d take out a matchbook or a napkin and write on it. I write on slips of paper all the time, or in little notebooks when I'm on the road.” 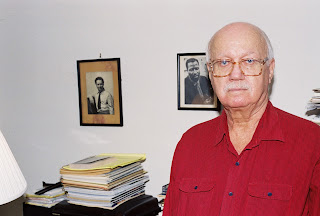 Etter’s books are prized by his many admirers and those of us fortunate enough to encounter his poems carry with us the fond remembrance of that first discovery. I recall with clarity the cold winter in 1973 I stumbled upon a copy of a chapbook titled Crabtree's Woman in the local library. I opened the book and read the first four lines of a poem titled “The Prairie River” and held my breath:

The prairie river possesses a nice piece of the summer sky.
It has always been that way.
The river pulls the sky down and holds on passionately,
one proud lover joining another proud lover.
At sunset, the sky sings out of a ruby red throat. 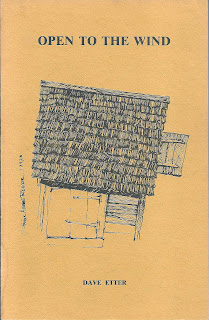 Dave Etter lived for many years in Lanark, Illinois, population 1,200. This is Etter country; a town of two-lane streets with storefronts dating from the 1800s. Lanark is an oasis amongst the flowing dunes of corn and wheat. A pharmacy, a bank, a grocery, and two taverns with motorcycles parked beneath a blue neon beer sign. This is the type of town where the local library is packed with books in a space smaller than some taverns, and where you just might find one of Dave’s books waiting to be discovered on a shelf.

Rest in peace old friend. I’ll see you again at sunset on the prairie. 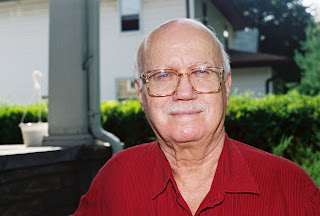