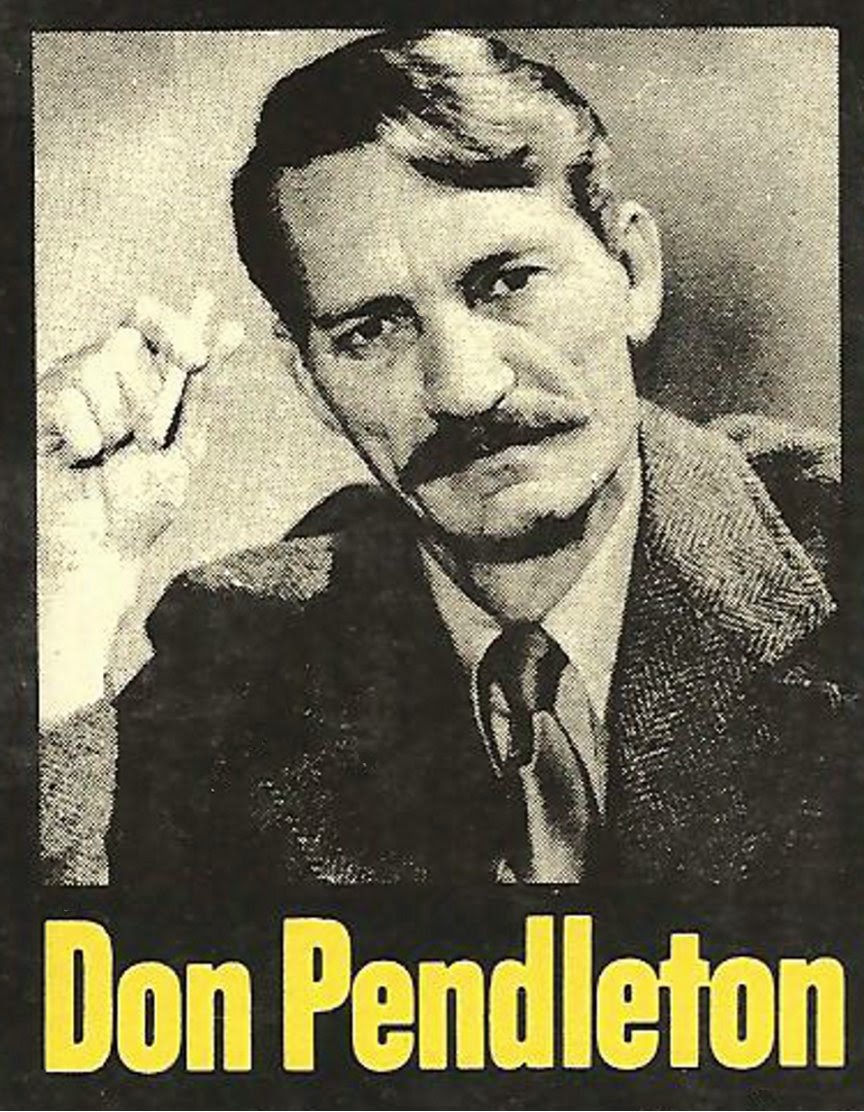 UPDATE 7-25-16!
In a comment from Linda Pendleton posted below,
Linda provides details on the Bolan novels.
Here's Linda's comments:
"The Executioner novels continue to be published by Harlequin--
Four novels a year. The Stony Man and Super Bolans
ended in December of 2015.
Also the original series of Don Pendleton are now in
ebooks, # 1-15 and 17-38,
and published by Open Road Media, and available at Kindle,
Apple, Kobo, Nook, Google, and indiebound."
THANK YOU LINDA!

THIS POST IS UPDATED, APRIL 11, 2015:
The Mack Bolan Fansite has announced the series will continue
although details are still pending.
Visit the Fan Site by Clicking HERE!

The late great Don Pendleton did action fans a favor when he created Mack Bolan. All of these years later and just typing Don Pendleton’s name sends a shiver down my spine. Pendleton and Bolan are from another time, when the 1969 headlines screamed of student protests against the war in Nam, Tricky Dick, and the ghosts of MLK and RFK. In my memory of those turbulent times it seemed as if the world had tipped over and everything we held dear came crashing to the ground. There was injustice everywhere, and it overwhelmed us. Interestingly enough, the issues that mattered to us then are no different than the problems that plague us today. 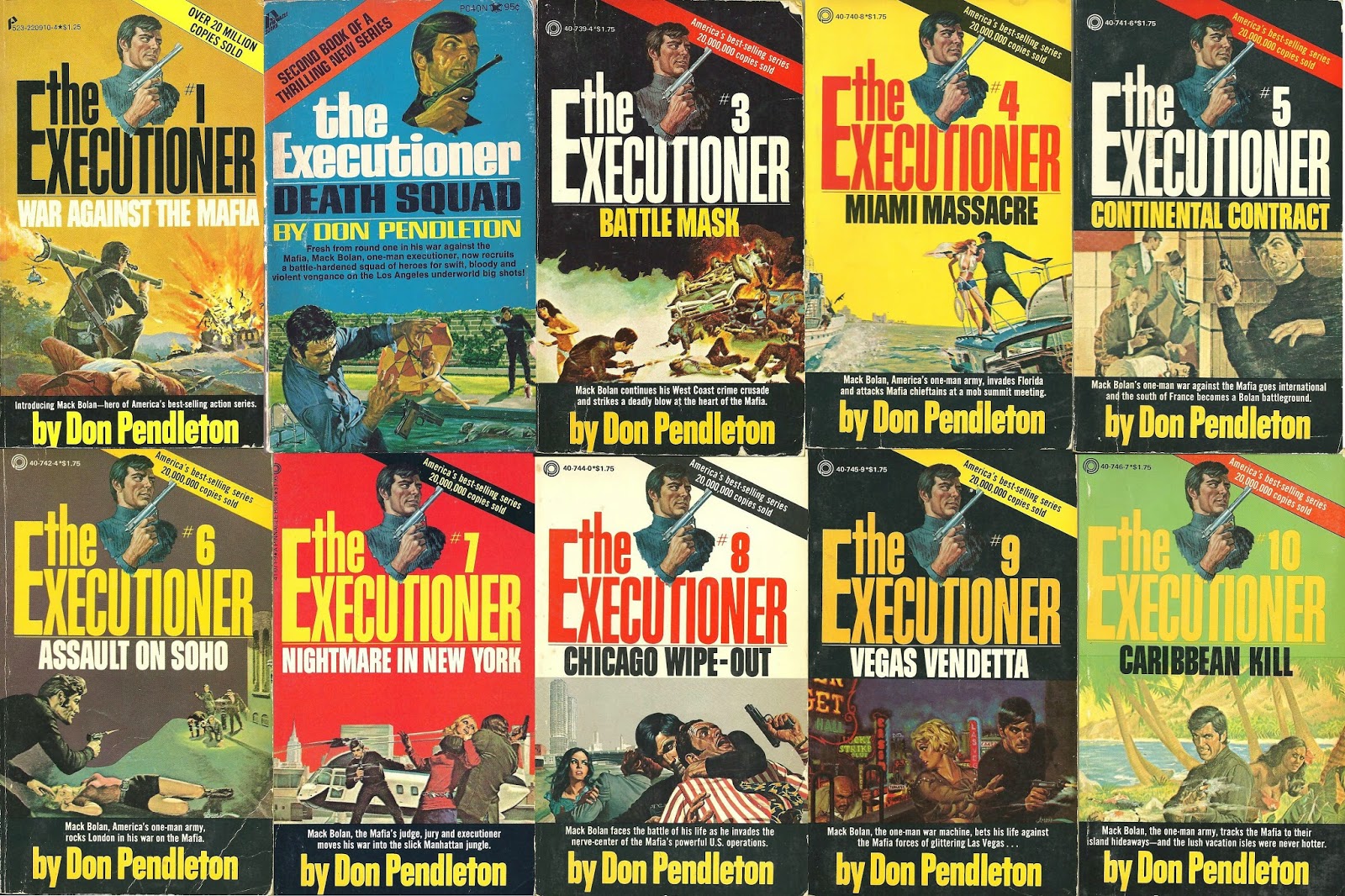 Mack Bolan represented a practical, tough-as-nails approach to fighting injustice. Bolan did what we all wanted to do: he tackled evil head-on, no holds barred, and he kicked ass. That first book, War Against the Mafia, has been reprinted many times. I was an instant fan and read most of the first one hundred books, which I still own. By then, Pendleton had turned the series over to a publisher and numerous writers have worked on the series with varying success. Today, I don’t know any writers of action novels that aren’t familiar with Mack Bolan. The fan base is extraordinary.
I wasn’t surprised when I learned recently that Gold Eagle/Harlequin was canceling the series this year. We have also learned that such steadfast men’s adventure series such as The Gunsmith, Longarm, Slocum and The Trailsman have also been cancelled. It may be the end of an era, but I suspect we’ll see Mack Bolan again. The truth is, the series had been floundering for a number of reasons. First, Gold Eagle did nothing to promote the books, nor did they engage Bolan’s worldwide fan base as they might have. Secondly, the series had become routine with some new writers turning in stories that clearly demonstrate they don’t understand the character. On the plus side, Mike Newton, Mike Linaker, Charles Rogers, Douglas P. Wojtowicz and Jerry Van Cook all regularly turned in solid stories. When Bolan was written well, there was no one like him in fiction. He touched a chord in us, and I believe that in some profound way he reminds us that the American Dream is worth fighting for.
Gold Eagle recently made a modest change to their cover design and I understand the series will continue through most of 2015. I’d love to see a new publisher tackle Bolan, engage the fan base which includes hundreds of young writers eager to write a Bolan story, and get away from the bland scenarios that have become carbon-copies of each other. Bolan needs to change; the character can flourish with new writers pushing Bolan in a fresh direction. It’s time to revamp Stony Man, give Bolan another lover interest akin to April Rose, and start the war anew.
I have my Bolan paperback collection stored in several large plastic bins here in my crowded den. I don’t know how many I own but I’ve read over two hundred of the 400 plus novels and novelettes. There are some fond memories here. The Executioner # 62 Day of Mourning by Stephen Mertz was the landmark entry where April Rose dies. It’s a great story. The next book, The Executioner # 63 The New War Book isn’t a story but offers an encyclopedia of Bolan facts and weaponry with illustrations. From this point on the series would vary in quality, often dramatically. The great “Moon Shadow Trilogy” by Mel Odom from 2003 (#s 296, 297 and 298) was a thrill ride. For my taste, I wish Odom had written more Bolans. But I think the second great phase of the series occurred in the early 1980s when artist Gil Cohen was doing the covers. The series had a true pulp style men’s adventure feel to it, and those are the books collector’s are after.
Of course I wasn’t just a fan; I’m also a book collector so numbers # 100, 200, 300 and 400 were of special interest. The Executioner # 400 Blind Justice was written by Mike Linaker and 100, 200, and 300 were written by Mike Newton who has written more Bolans than anyone else. At least I believe he holds the record. Feel free to correct me if I’m wrong.
My favorites, however, will always be the first ten. Those are Don Pendleton’s best, and classics of adventure fiction. I own three copies of War Against the Mafia and I’ve traded about that many for supplemental copies to fill in gaps. Death Squad, Battle Mask, Miami Massacre, Continental Contract, Assault on Soho, Nightmare in New York, Chicago Wipe-Out, Vegas Vendetta, and Caribbean Kill took Bolan across the country in his never-ending war. Thumbing through Caribbean Kill today it’s hard to believe this was in 1972.
Mack Bolan is fearless, determined in his quest to conquer evil, and a patriot. He’s the American equivalent of James Bond, and coveted by collectors along with those fantastic Nick Carter paperbacks from the same era. A lot of men’s adventure series have come and gone, but somehow Mack Bolan seems eternal. I’ve read all of the Bolans published in the last two years, and while some are good, just as many are routine. The future is uncertain, but my instincts tell me Bolan will be back. There’s plenty of gossip about a feature-length film being prepared, and once Gold Eagle ends its run I suspect we’ll see Bolan again, somehow. One thing is certain: Mack Bolan is too good a character, far too appealing and far too exciting to ignore. And all of us Mack Bolan fans will be waiting to see what happens next. 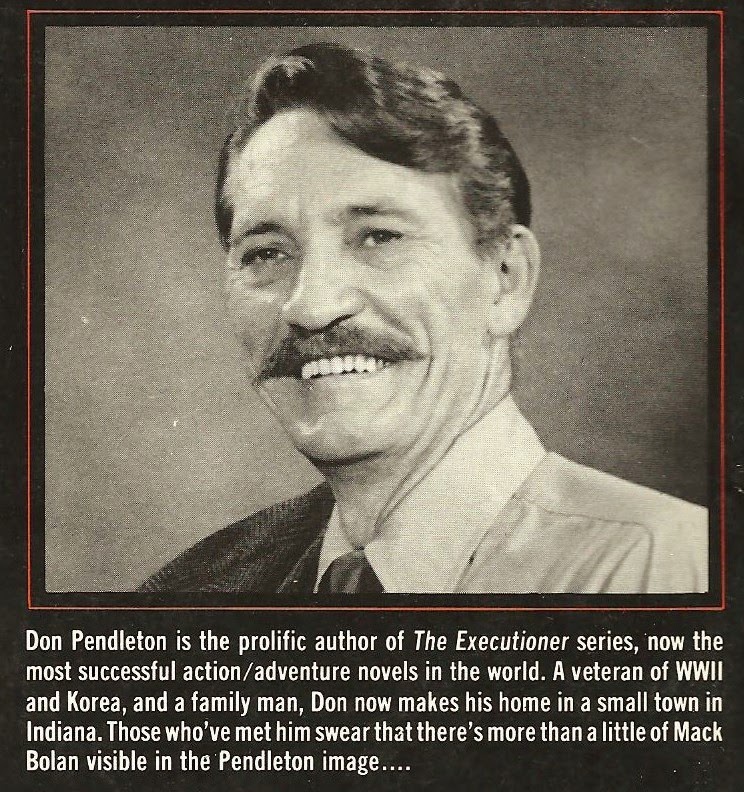 For that we have Don Pendleton to thank! 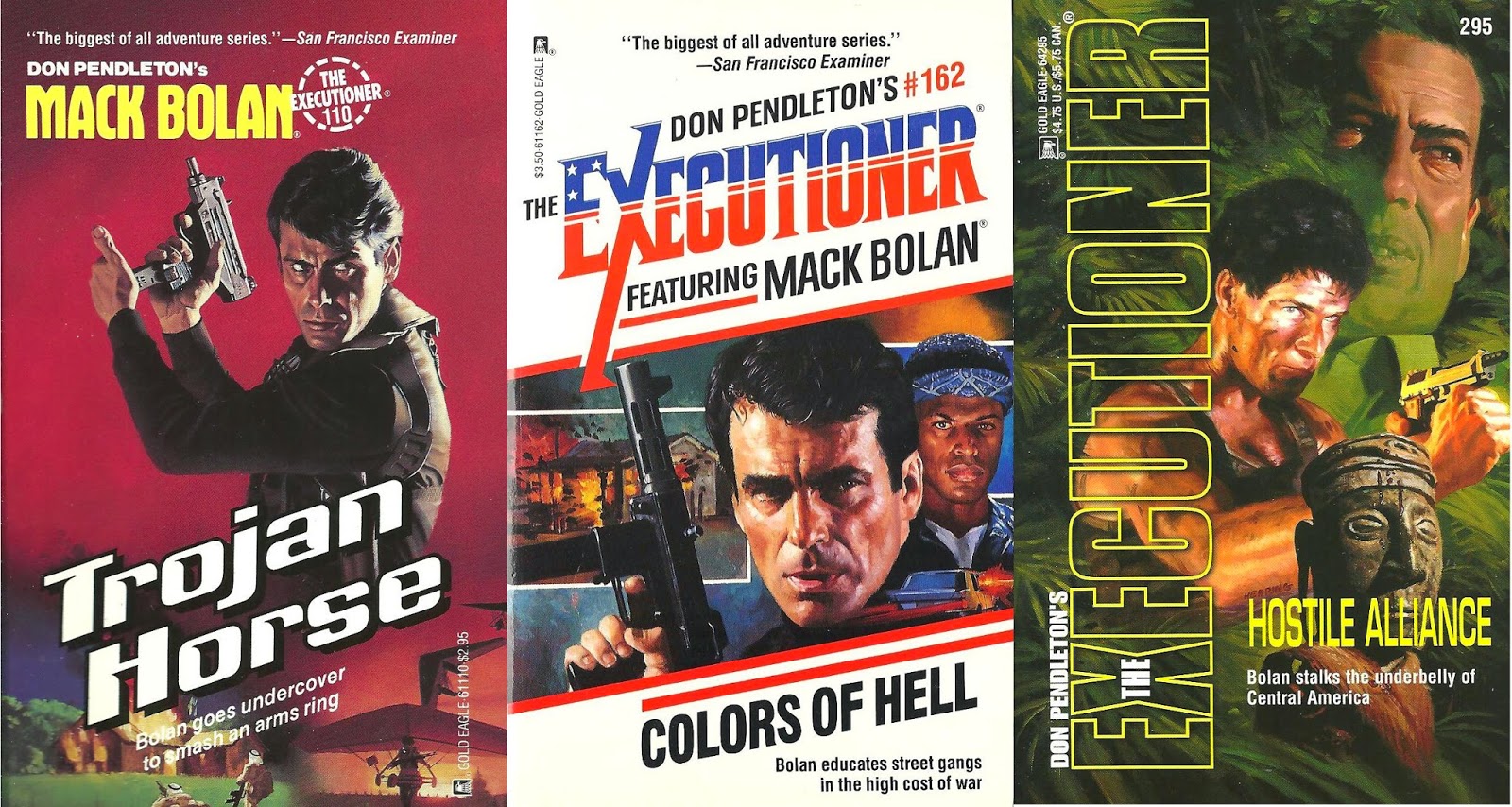 Posted by Thomas McNulty at 9:19 AM 5 comments: 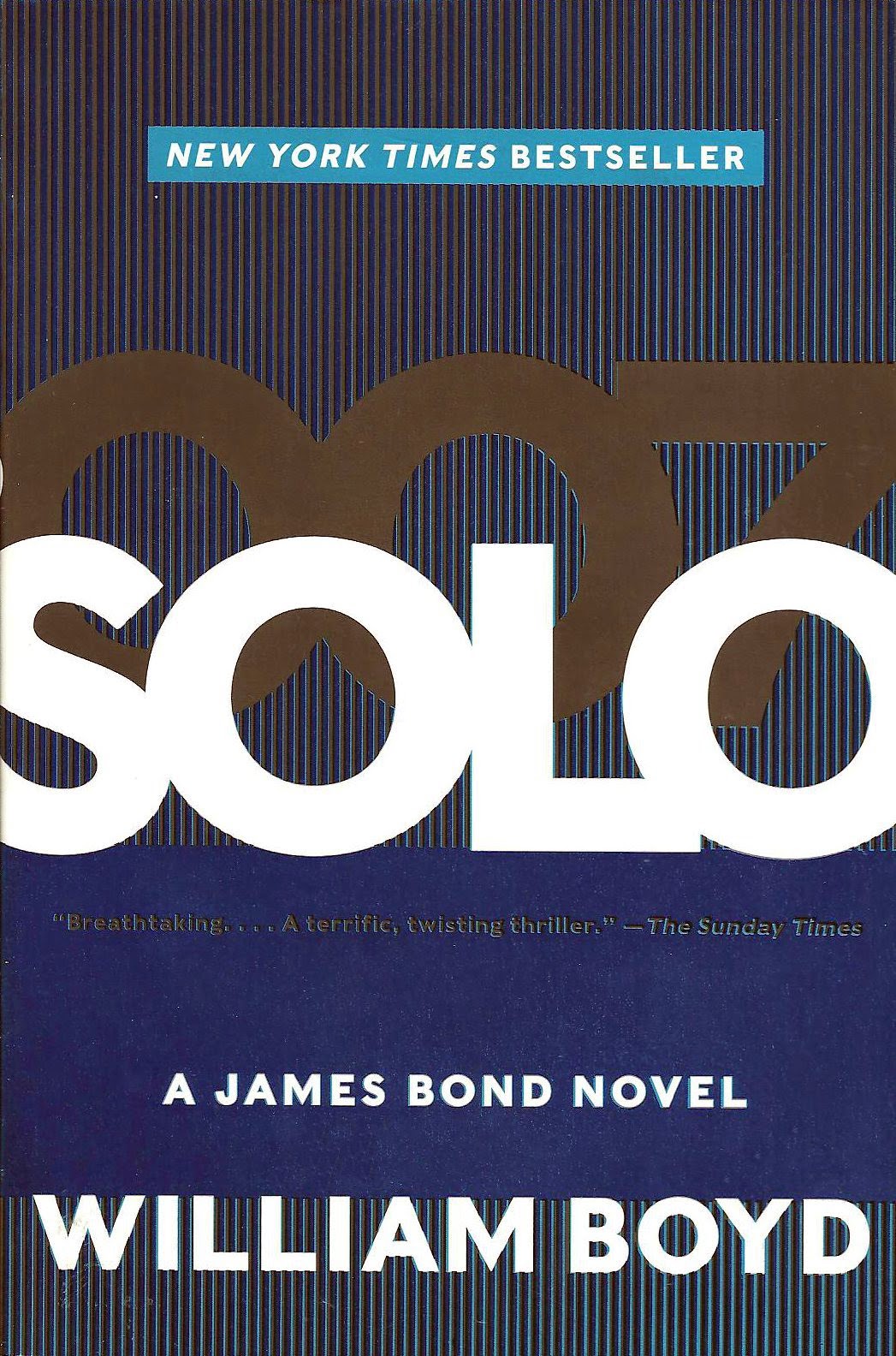 William Boyd’s Solo, the latest James Bond novel, is a thrilling story with just the right touch of action. Boyd understands James Bond, and he puts his own considerable writing talent into a story that is at first compelling, and finally breathtaking in its conclusion. I enjoyed this book and I will rate it as among the best of the Bond tales by Ian Fleming’s many successors. There’s a lot to choose from with those successors, first with Colonel Sun by Kingsley Amis (writing as Robert Markham), all of John Gardner’s and Raymond Benson’s 007 novels; and recently with Sebastian Faulks and Jeffrey Deaver. By now every James Bond fan has checked in and posted their “reviews” of Boyd’s Solo on the Internet with the general consensus being favorable. I noticed that when the core fan base likes a book they are quick to claim that such and such an author “writes just like Ian Fleming.” That’s nonsense. None of Fleming’s successors write like him, although most of them managed to capture the flavor of the Fleming novels, including Boyd. Too many readers are confusing their familiarity with Bond’s world with Fleming’s prose style. William Boyd is a much different prose stylist than Ian Fleming, but Solo works so well specifically because he not only understands James Bond, but he understands the world around him. Solo is a ripping good yarn. It takes place in 1969 but the late 60s cultural backdrop is modest. The first half has Bond involved in a West African nation’s civil war. Boyd writes with authority about Africa, a country that has occupied some key elements of his writing life. This is where we meet all of the major players. Solo, however, changes and becomes a breathtaking adventure when Bond decides to go “solo” (without sanction) to exact his vengeance on a bad-ass named Kobus Breed. Of course there are some romantic interludes, notably with an Hammer Films-type of actress named Bryce Fitzjohn who plays characters like Vampiria in films like The Curse of Dracula’s Daughter; but the second half of the book is the best and reminded me that Fleming himself was influenced by such pulp writers as Raymond Chandler and Dashiell Hammett. Boyd handles the action with expertise, and the startling conclusion begs for a sequel. Sadly, that probably won’t happen because Anthony Horowitz has been tagged to write the next Bond adventure. Bond fans and Fleming fans (those are, by the way, two distinctly different groups) shouldn’t miss Solo. It may not be the very best Bond novel (my choice for that distinction would be Fleming’s From Russia With Love) but it’s high on the list of great Bond novels. Pour yourself a martini, shaken and not stirred, and enjoy!
Posted by Thomas McNulty at 8:07 AM No comments: