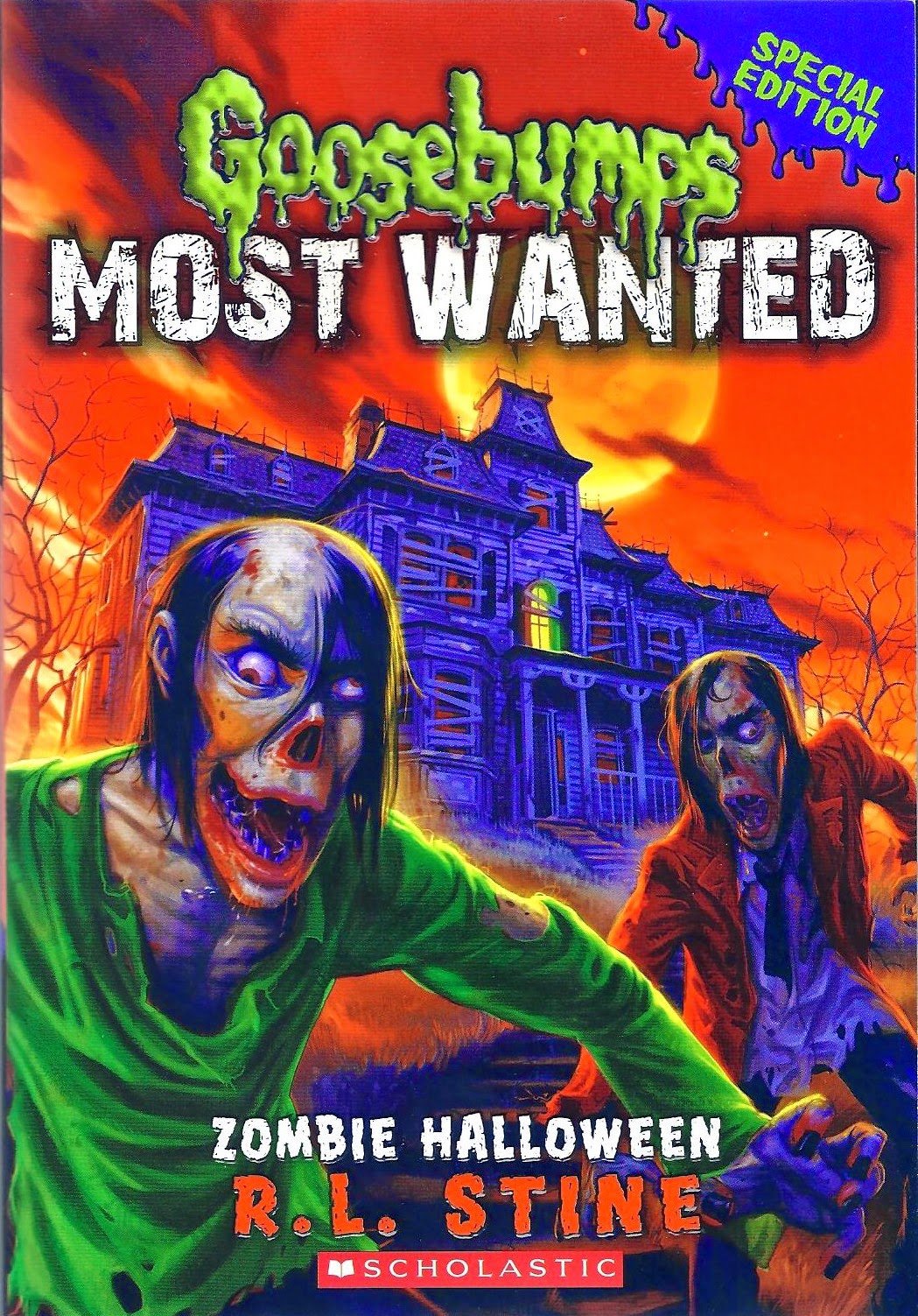 There is no better author to review on Halloween day than R. L. Stine. My daughter got me hooked on Stine’s campy tales some years back and every once in awhile I pick one up. He’s always good, creepy fun. Hey, Halloween is just around the corner. You know what that means – dead leaves skittering across the sidewalk, a cold, ominous wind, evil looking pumpkins with candle-flame eyes, and the latest from R. L. Stine. Zombie Halloween is especially cool. This new kid in town, Kenny Manzetti, has moved into an old house to help his grandfather. When a new family moves in next door he notices their choice of furniture is a bit odd. You see, Kenny notices the movers have brought three coffins into the house – three coffins! Naturally, some investigation is required. Stine has never lost his touch at making ghoulish scenes fun for young readers. Zombie Halloween is a perfect example of his wickedly cool imagination and level-headed but still awesome gothic touch. He’s a modern pulp horror maestro for young readers. Bless his black heart. Kudos to Scholastic Books for keeping him in print and giving these paperbacks such colorful covers. The Goosebumps books are still collector’s items. Zombie Halloween is 174 pages of ghoulish, spine-tingling thrills. I wouldn’t be surprised if a creepy kid or two in my neighborhood finds a copy in their trick or treat bag when the clock strikes twelve on Halloween night. Ha ha ha....eeeeeeeeeeeaaaaah!
Posted by Thomas McNulty at 6:08 PM No comments: 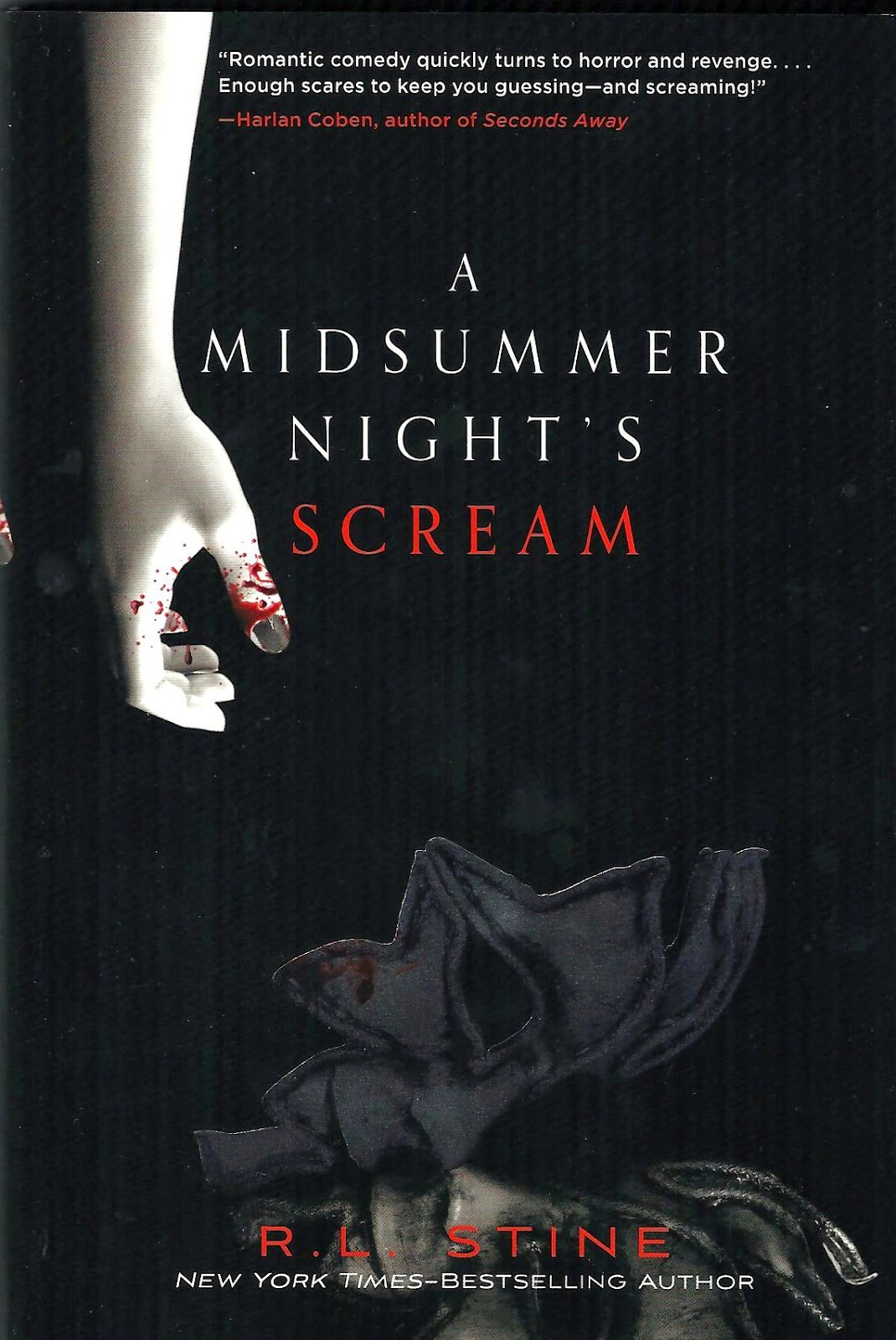 That spooky genius R. L. Stine is at it again with another young adult novel for his slightly older audience. Published in hardcover by Feiwel and Fiends, A Midsummer Night’s Scream follows his previous adult novel, Red Rain. There is clearly no end to R. L. Stine’s wicked imagination, and thank god for that. Stine makes Halloween fun. I’d have to list Stine up there with Guy N. Smith and James Herbert as my favorite horror-show scribes. Although Stine’s audience are comprised of “Tweens” (who thought up that ghastly word?), I maintain that his books can and should be enjoyed by anyone with a penchant for Halloween style entertainment. Now let’s get to the gruesome, palpitating heart of the bloody matter. A Midsummer Night’s Scream takes place sixty years after three young actors lost their lives on a movie set. In a desperate attempt to save a failing movie studio, a film crew revisits the sight of the mysterious murders. But nothing is as it appears. There may be ghosts here, and there are obviously evil forces at work. Stine never plays it safe. Evil is evil and the plot heats up fairly swiftly. The short chapters and Stine’s clipped prose make this spooky story accessible to readers of all ages looking for some Halloween thrills. You’ll breeze along with the mayhem at a chilling pace, like a swimmer in quicksand, and when you look up the shore will be too far away and you’re toast! The book has a nice design with each chapter heading dripping with blood. For my money, Halloween just isn’t Halloween without a book by R. L. Stine.
Posted by Thomas McNulty at 8:29 AM 2 comments:

Stories of Darkness and Dread by Joseph Payne Brennan 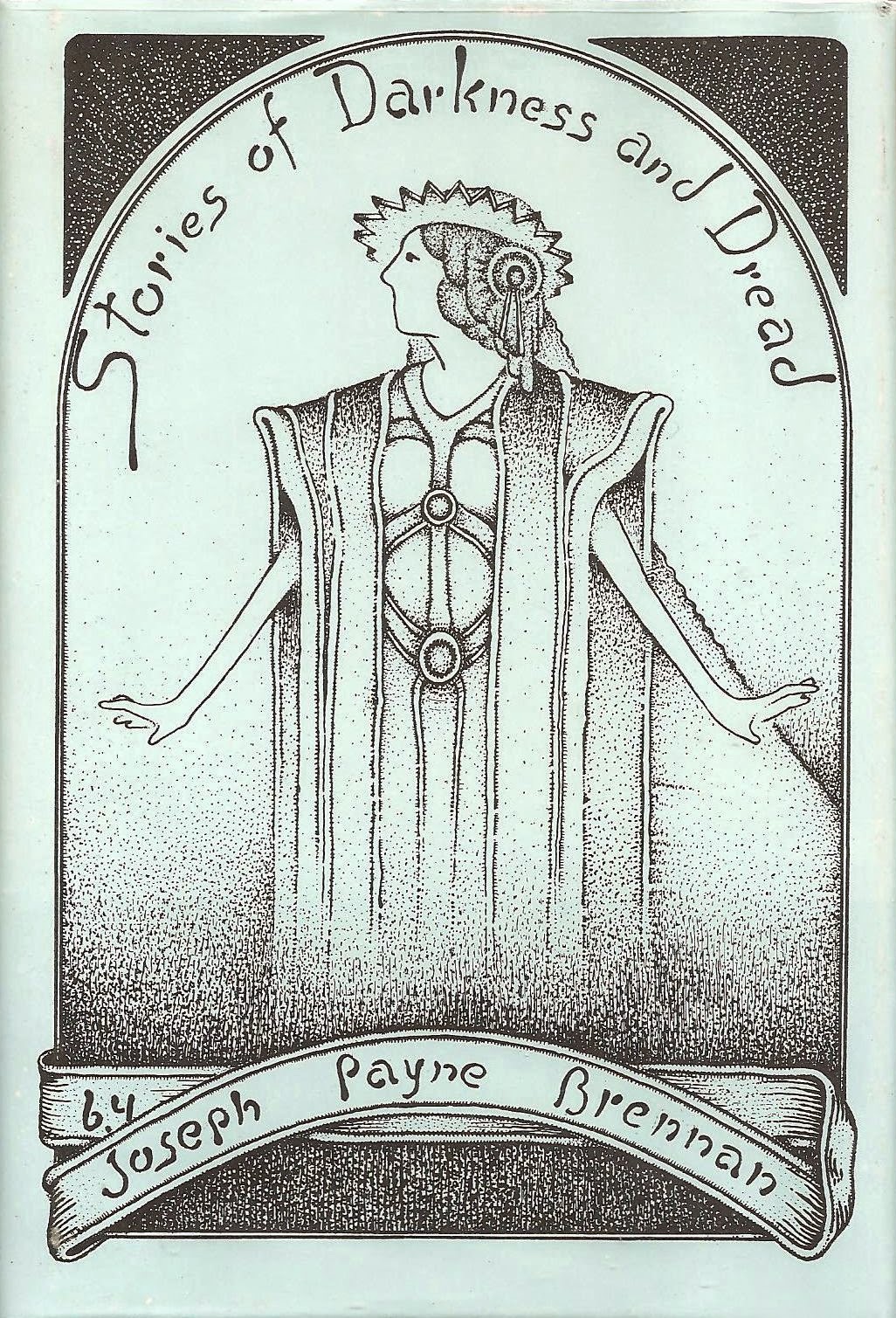 This 1973 Arkham House edition collects eighteen of Joseph Payne Brennan’s short fiction. These are short-short stories, often no more than seven pages and less. Brennan is old school horror, probably out of style today, but I always find him fun to read. At his best, he could convey a singular aspect of terror equal to any suspense writer. Several of these tales come across as no more than vignettes and occasionally as a story treatment that might have been expanded. The conclusions are perfunctory. Still, what Brennan does best is take an idea and run with it. Here, then, are examples of story motifs and themes that suddenly burst into little morsels of terror. They do have that abbreviated comic book feel, like stories you might have once read in a Boris Karloff comic book, but once you accustom yourself to the format you’ll be flipping the pages with morbid delight.  For example, the first story, City of the Seven Winds, is about a traveler in the Syrian desert who stumbles into an unknown city besieged by a terrific wind. Given shelter by a seemingly friendly dwarf, he’s soon locked in a room where his host intends him as a sacrifice. A panel opens to reveal “monstrous elementals from some infinitely distant end of the universe, of the half-conceived hallucinations of some unspeakable god of savagery and chaos, brought to being in a devil’s broth which boiled and seethed outside there in the night, borne up by wings of that wailing wind.” These corpse creatures “gibbered and gaped” with their “dead white eyes pressed close against the glass.” At eleven pages City of the Seven Winds is one of the longest tales. Brennan is also fond of stories involving characters displaced in time as evidenced by Episode on Cain Street, In the Very Stones, and The House at 1248. In Black Thing at Midnight the creature that comes to murder a caretaker is like “a corpse that had lain for a long time at the bottom of the sea.” That brief description is typical of Brennan, clearly Old School Spook Show stuff, culled from the nightmare web of Joseph Payne Brennan’s pulpy mind. As you may have guessed, Brennan’s stories are favorites in my household, especially during the season of witches and jack o’ lanterns.
Posted by Thomas McNulty at 9:22 AM No comments:

The Ghosts of Sleath by James Herbert 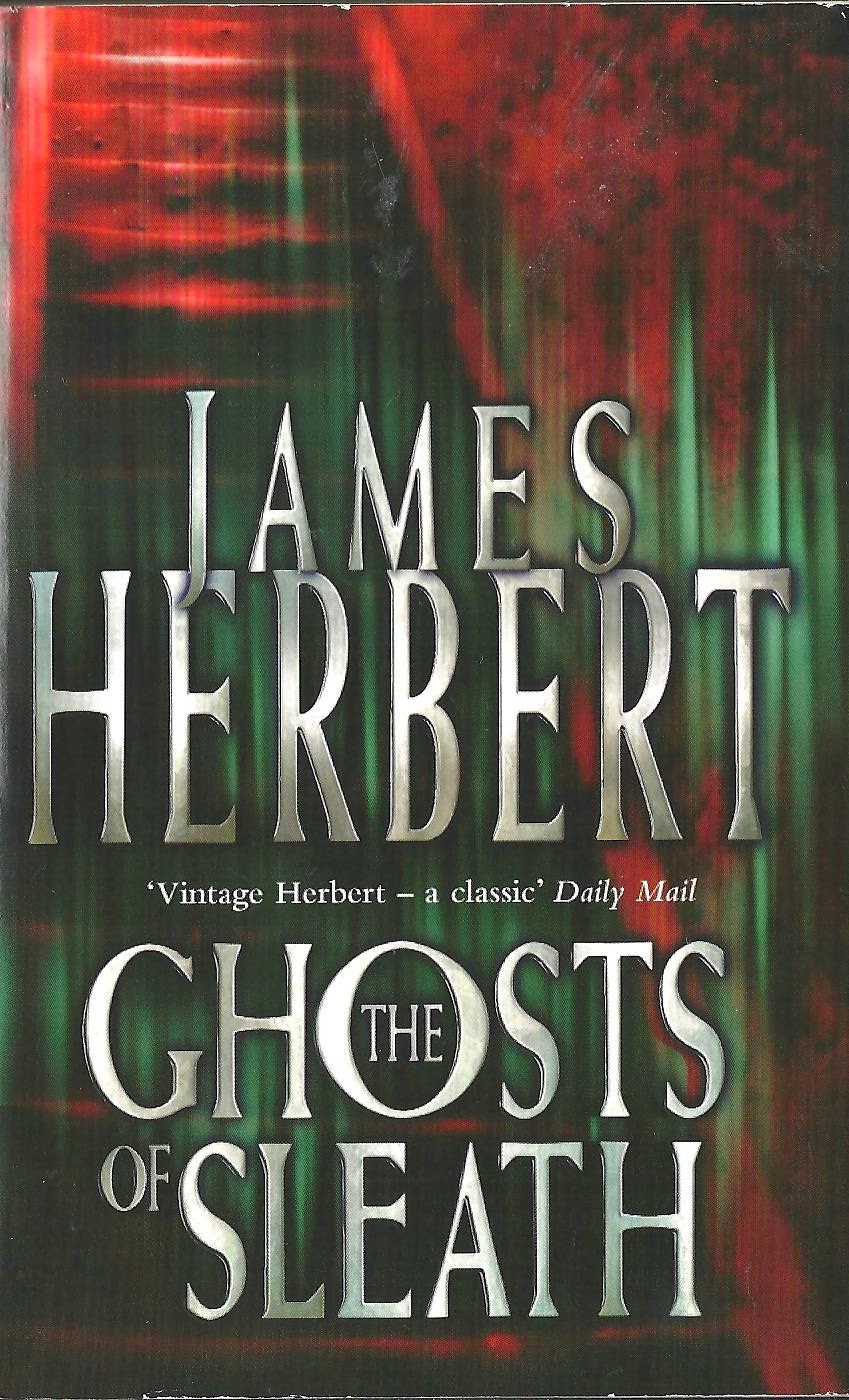 The late James Herbert wrote awesome horror novels and supernatural thrillers. I much prefer his books over some of the well known American horror writers whose books invariably end up as remainders. James Herbert knew what made for some good old-fashioned thrills, and his prose always crackled with imagery. The Ghosts of Sleath is a favorite from 1994. This is the second of three novels featuring the character David Ash, although each book can be read separately (the others are Haunted and Ash). Psychic investigator David Ash delves into the spooky events that are traumatizing a community in the Chiltern Hills. On the surface, Sleath is a pleasant town, but a deep dark secret plagues the town and it may very well destroy everyone who lives there. Ash presses on with his investigation and then bodies start showing up – and ghosts. There are lots of ghosts, and they aren’t friendly. Herbert wasn’t the type of horror writer to dwell on gruesome images, although those images are present, the horror builds through the eyes of his characters. The Ghosts of Sleath is a virtuoso piece of writing from Herbert, a genuinely spooky and unsettling book. I appreciate all of Herbert’s many fine novels, and I recommend them all. But for those readers who have yet to sample his books I recommend The Ghosts of Sleath as the perfect Halloween fare – scary and memorable. Or you can read Haunted, The Ghosts of Sleath and Ash in that order as they were published. The thrills will definitely keep you awake at night.
Posted by Thomas McNulty at 8:18 AM No comments:

The Witching Hour by Anne Rice 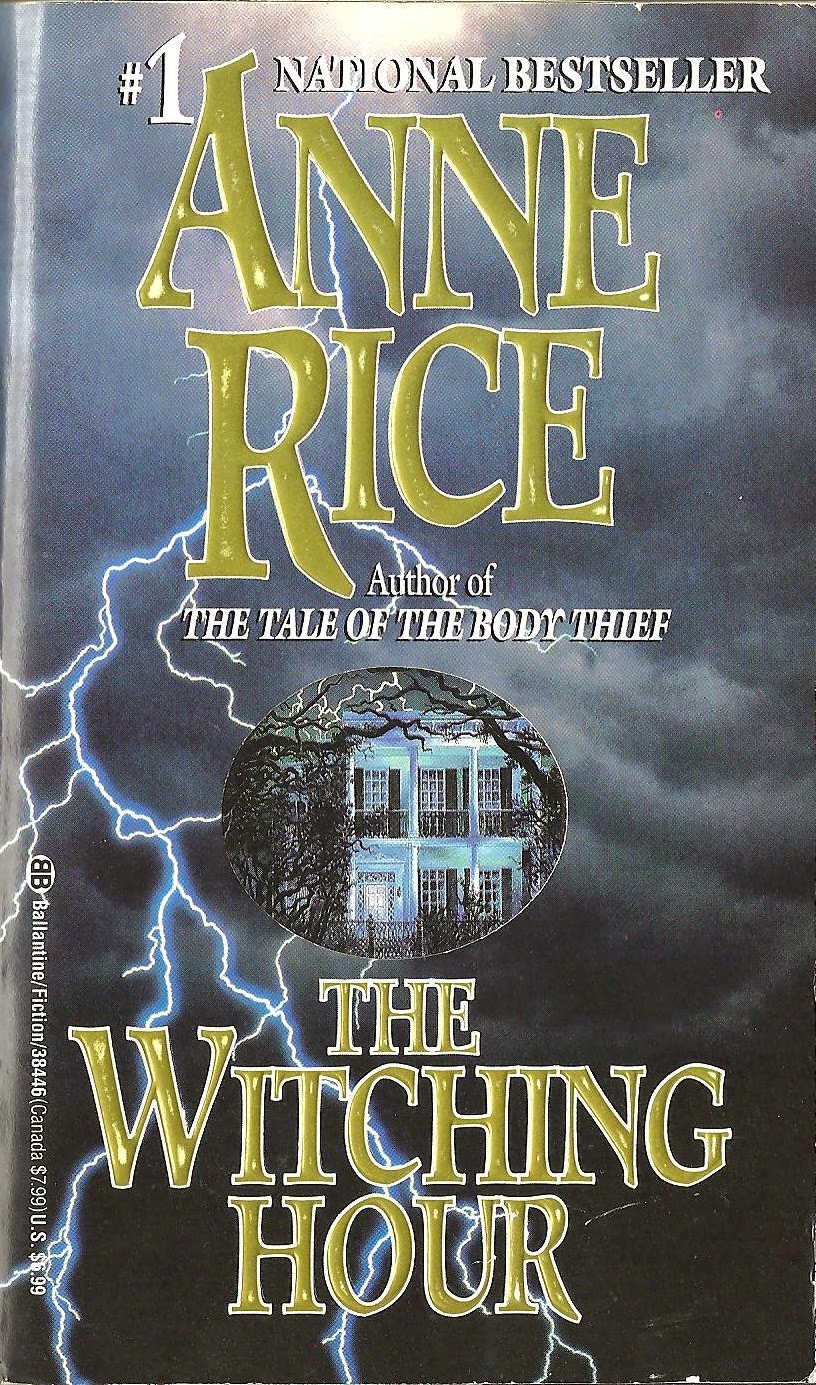 Anne Rice is about to release another vampire novel (Prince Lestat) which, naturally, I’ll purchase and review later. Meanwhile, to celebrate Halloween I thought I’d take a look at The Witching Hour, a favorite from the early 90s. In this sprawling, creepy book, Rice proved herself the one true American Master of Popular Horror Fiction. Those boys that occupy the K-section in Barnes & Noble are past their prime and rarely publish anything other than remainders and future door-stops. Rice, on the other hand, has been consistent in producing interesting and sometimes even outstanding horror fiction. First in her series about “The Lives of the Mayfair Witches,” The Witching Hour introduces us to Rowan Mayfair who initially doesn’t realize that she is descended from a line of witches. Included here is Lasher, an evil spirit intent on re-animating corpses. What follows is a seduction performed by Lasher in a long and deliciously wicked fashion. Rice is at her best in setting her scenes with the appropriate imagery, insightful characterizations and gothic tone. The suspense is breathtaking throughout. Although, I am not a fan of overlong novels such as this one, Rice held my intention. I consider The Witching Hour one of her best books. There are some gruesome scenes, plot twists (especially one involving Rowan’s baby) and some highly-charged prose that turns this smorgasbord into a Halloween treat that you won’t soon forget. I’ve always been fascinated by witches (dated a few in the 70s LOL!) but finding quality fiction featuring witches is sometimes fraught with peril. The Witching Hour is the exception. Rice can weave a wild web of suspense. Her characters are all compelling, and even when I don’t like them I’m curious to find out what happens to them. And of course she nails the gothic mood right up front. The Witching Hour spans 300 years and you’ll be greeted by witch burnings, evil spirits and old New Orleans. The creepy mood is dripping off these pages. I understand that The Witching Hour is a perennial best-seller for Rice.
Posted by Thomas McNulty at 6:18 PM No comments: