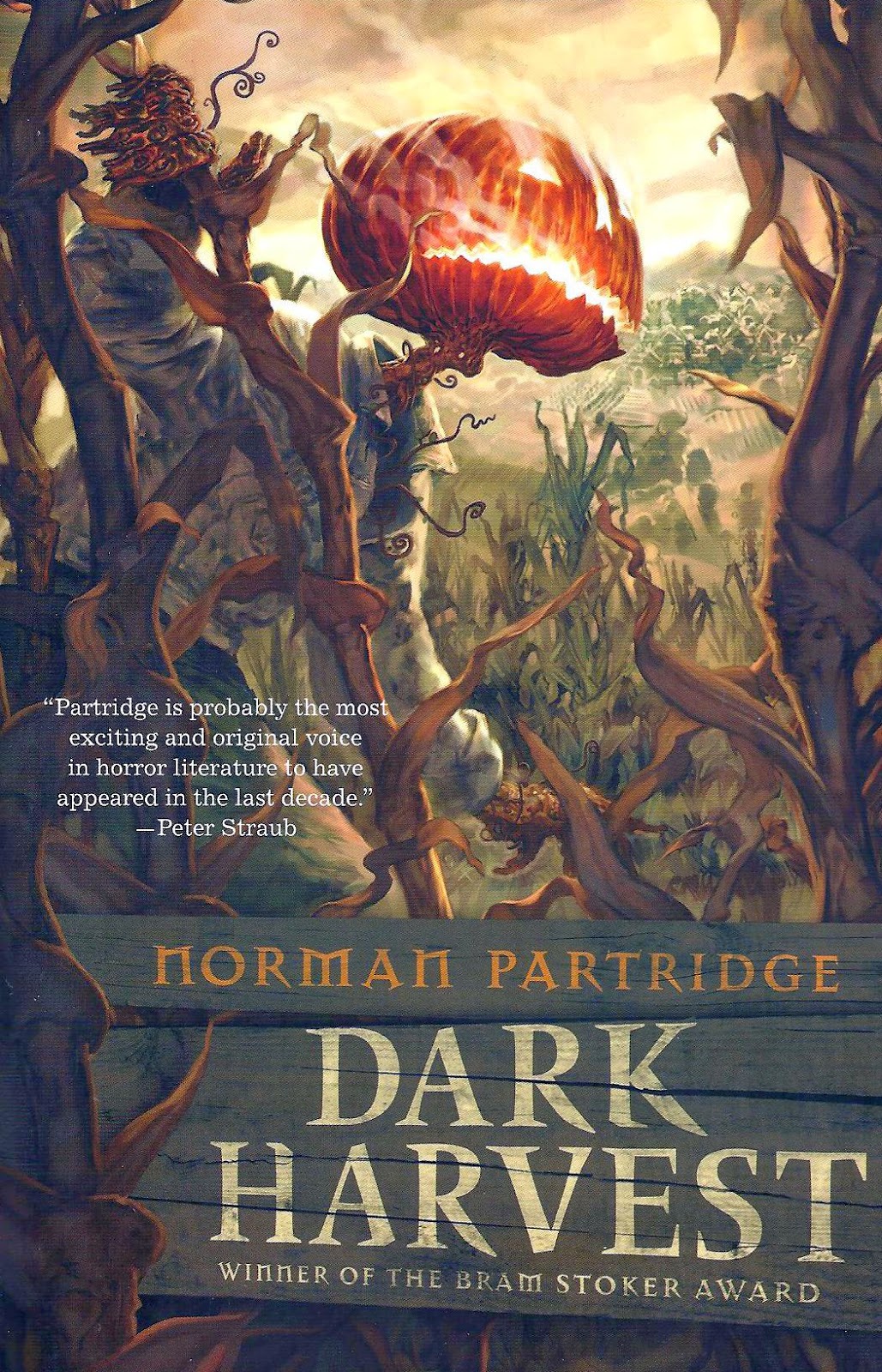 I not sure why Norman Partridge isn’t a household name. Not that being a household name is a good thing, because being in the public eye is often unenviable. Still, Partridge is one hell of a good writer and I believe he deserves far more acclaim even though his fiction has already won many awards. He works primarily in the horror and suspense genre producing wild and creepy short stories and novellas. Dark Harvest is a novella published in 2006 by Tor although it was originally published by Cemetery Dance Publications. This Tor edition reached a wide audience. The awesome cover art is by Jon Foster. Dark Harvest is a scary Halloween tale, wholly original, creepy as hell, and a great American piece of horror fiction. Anything else I can say about Norman Partridge or his work would be superfluous. Here’s the low-down: The October Boy is essentially this pumpkin-headed kid who comes to life and kills people. Pete McCormick decides to take it upon himself and uncover the October Boy’s secret – if he can survive long enough. Just exactly who or what is the October Boy? They also call him Ol’ Hacksaw Face or Sawtooth Jack. He emerges from the cornfield every Halloween with a butcher knife in his hand intent on killing and killing. But why? Partridge layers his tale with themes about deceit, loyalty and family secrets all of which adds depth to this breathless story. The pacing is relentless. Dark Harvest is one of those books that held my attention from page one. Of course, everything that I’ve read by Partridge falls into that category. It’s interesting to see a novella get such mainstream attention. Dark Harvest was raking in some awards before this re-publication by Tor. Just goes to show that the novella isn’t dead and a great writer doesn’t need 900 pages to tell a quality tale. Dark Harvest is a truly scary book. Make sure your doors are locked when you read it.
Posted by Thomas McNulty at 6:25 PM 2 comments: 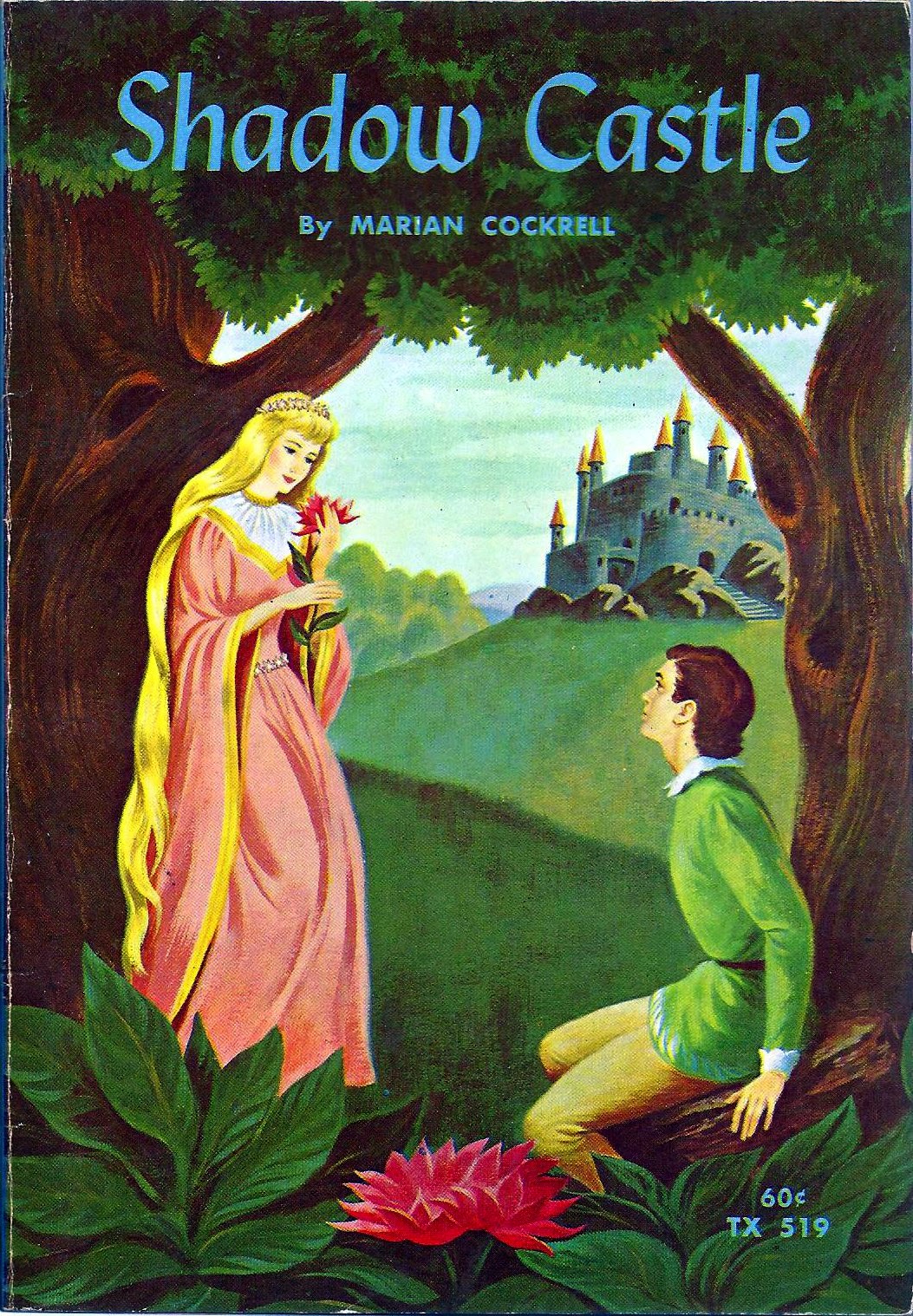 Shadow Castle is one of those remarkable books that refuses to go away. Published in 1945, most readers are familiar with it because of the 60s and 70s reprints from Scholastic Book Services. The interior illustrations are by Olive Bailey. Written for young readers, Shadow Castle is a fantasy in the same vein as The Hobbit, Alice in Wonderland or The Chronicles of Narnia. Filled with fairies, a prince, a dragon and some very nasty goblins, Shadow Castle is at times surprisingly dark. I first read it at about the age of nine and recall being horrified by the goblins and enchanted by the dragon. I re-read it recently and found it hasn’t lost its magic. The plot is simple enough – a girl stumbles into another realm where she finds a castle in the middle of a dark forest. The castle is occupied by the shadows of kings and queens all waiting for someone to break the spell that keeps them captive. It is a shadow castle in the literal sense. This plot device adds a haunting tone to the book. The girl, Lucy, may well be the one to break that spell. Her adventures are swift and imaginative. Cockrell was a fine writer and also published several novels for adults, although Shadow Castle remains her best known work. An expanded edition is currently in print which restores Cockrell’s original manuscript. Apparently Cockrell’s book was heavily edited and this new edition restores her complete manuscript. If mainstream bookstores like Barnes & Noble hope to remain in business they need to stock their shelves with more independent titles such as the expanded edition of Shadow Castle. This is what people are looking for, not hardcover remainders of today’s flock of unreadable suspense writers. Meanwhile, find yourself a copy of Shadow Castle where the first chapter, “The Hidden Tunnel,” will transport you to a shadow land: “If she hadn’t gone exploring in the deep, dark forest, Lucy might never have met the little dog at all...”
Posted by Thomas McNulty at 7:54 AM No comments: 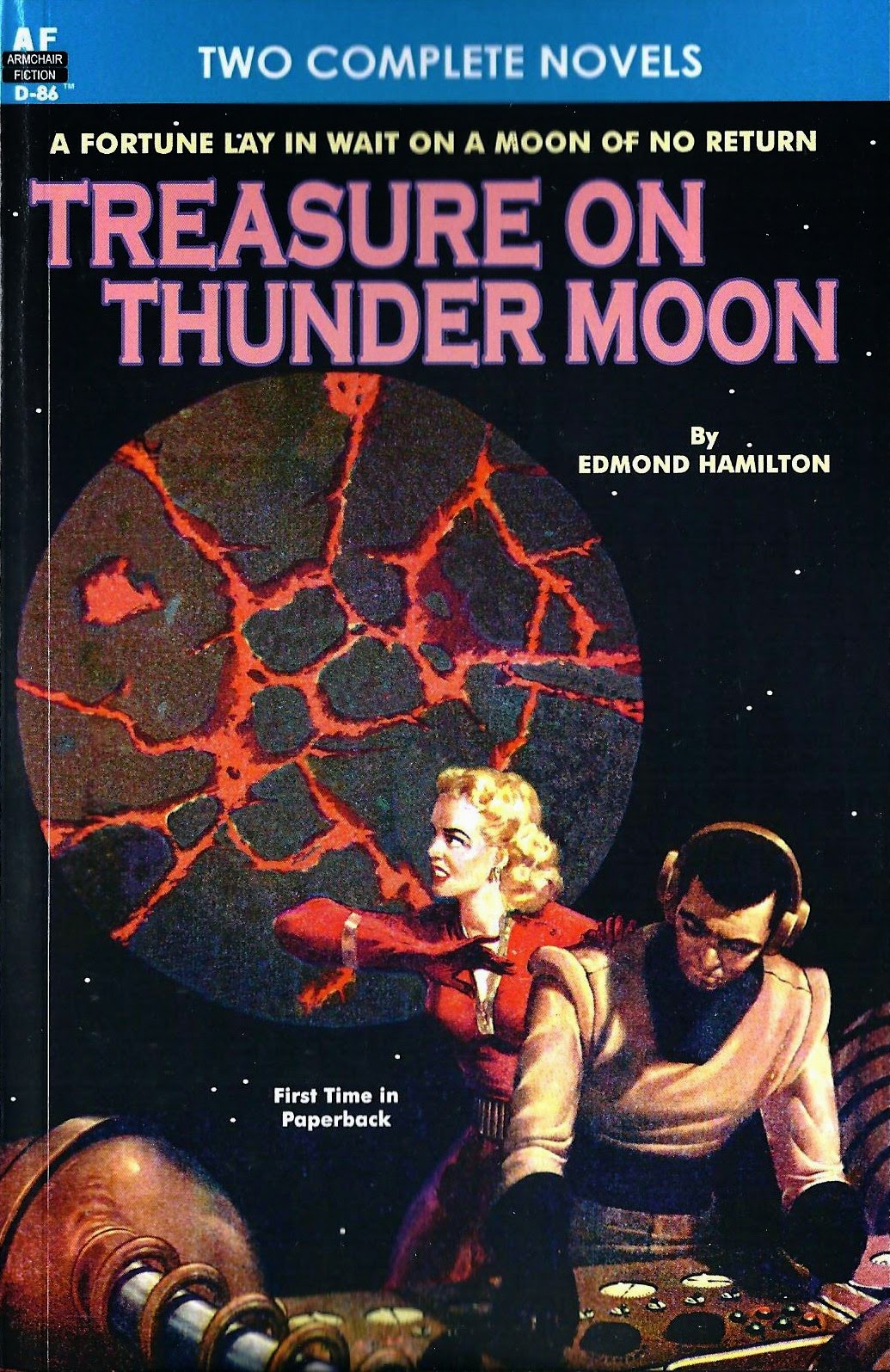 This edition of Treasure on Thunder Moon by Edmond Hamilton is published by Armchair Fiction in Medford, Oregon as part of their double-novel series. Hamilton was one of the greats from pulp’s golden age, although these days he doesn’t appear to be as popular as others from the same era. I know that Haffner Press has also reprinted numerous stories by Hamilton. He certainly deserves as much attention as any writer from that era and I’ve always enjoyed his stories. Treasure on Thunder Moon is pure old-fashioned space opera, a sub-category of science fiction that you’ll never see today in the pages of Analog or The Magazine of Fantasy and Science Fiction. Hamilton’s space opera tales are never boring. I would argue that Treasure on Thunder Moon is just as relevant today as when it was published in 1942 because Hamilton tackles a subject that still resonates. Some of the best science fiction stories aren’t simply adventure tales, although that’s the framework the writers hung their stories on. John North is an aging space pioneer who can’t find a job because “the Company” considers him too old. North and his group of aging space veterans all yearn for another outer-space adventure, but instead they are forced to sit around and reminisce about the old days. Aline Laurel offer North and his pals a chance to hunt for levium, the rarest of minerals, on Oregon, a moon of Uranus known as “Thunder Moon.” Hamilton’s story is quick, exciting and well-written. The characters are believable. North and his veteran space pals prove themselves more than capable, and I found myself rapidly turning the pages to find out what happens next. This old story, like the its characters, still has a lot of life and shouldn’t be ignored. Treasure on Thunder Moon is my pick this month for high-octane adventure. The second novel featured is Trail of the Astrogar by Henry Hasse which is also a good, rollicking tale. Astrogar was a freighter that disappeared and the captain’s daughter sets out to solve the mystery which involves a menace from deep space. The suspense is pretty good in this one. Taken together, the edition is worth the $12.95 price tag. Armchair Fiction’s titles are often discounted on Amazon. I’m enjoying them and I’ll be reviewing additional titles. 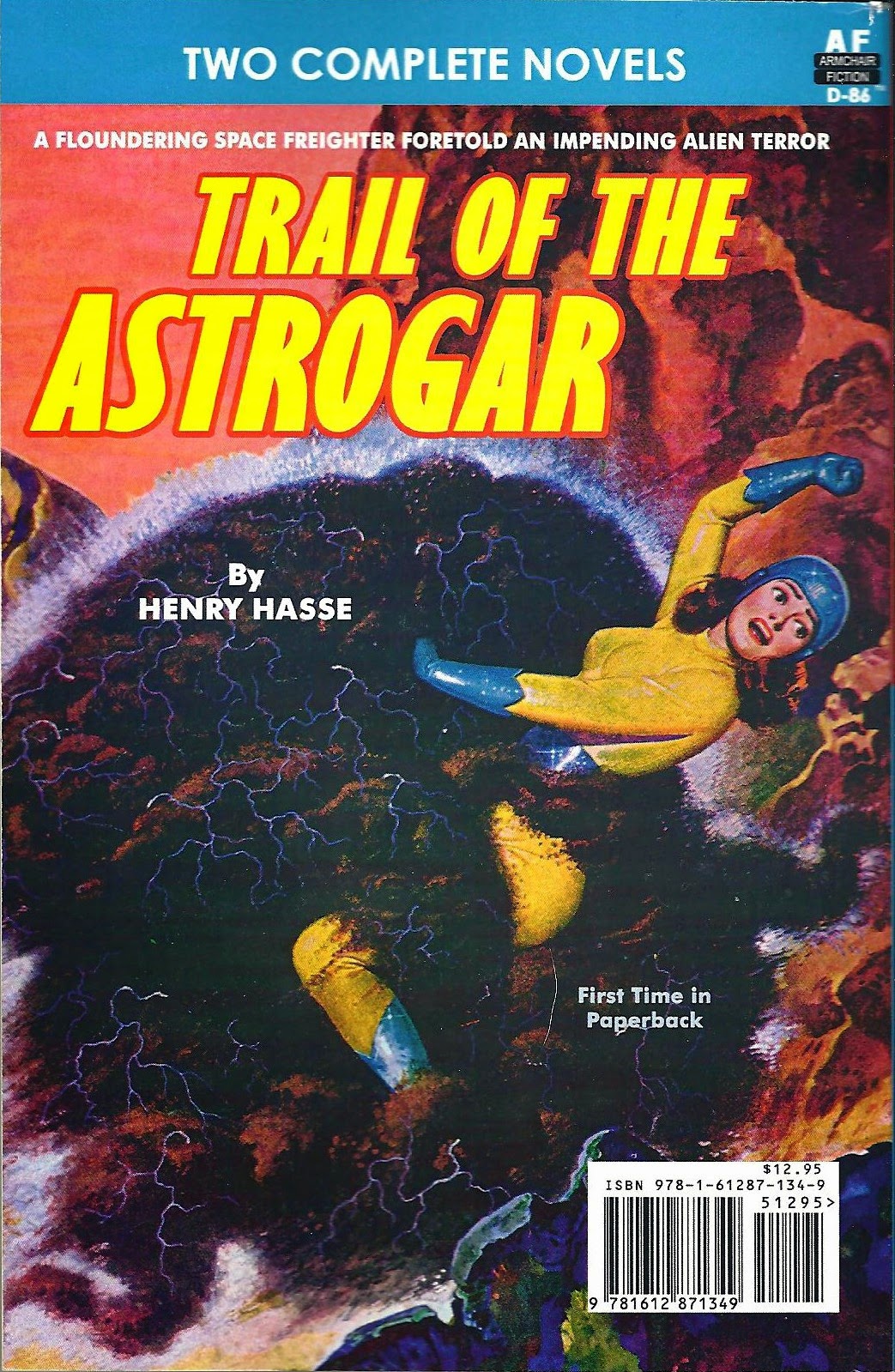 Visit the Armchair Fictionwebsite here!
Posted by Thomas McNulty at 10:16 AM 2 comments:

The Mystery of the Flying Skeleton by Mel Lyle 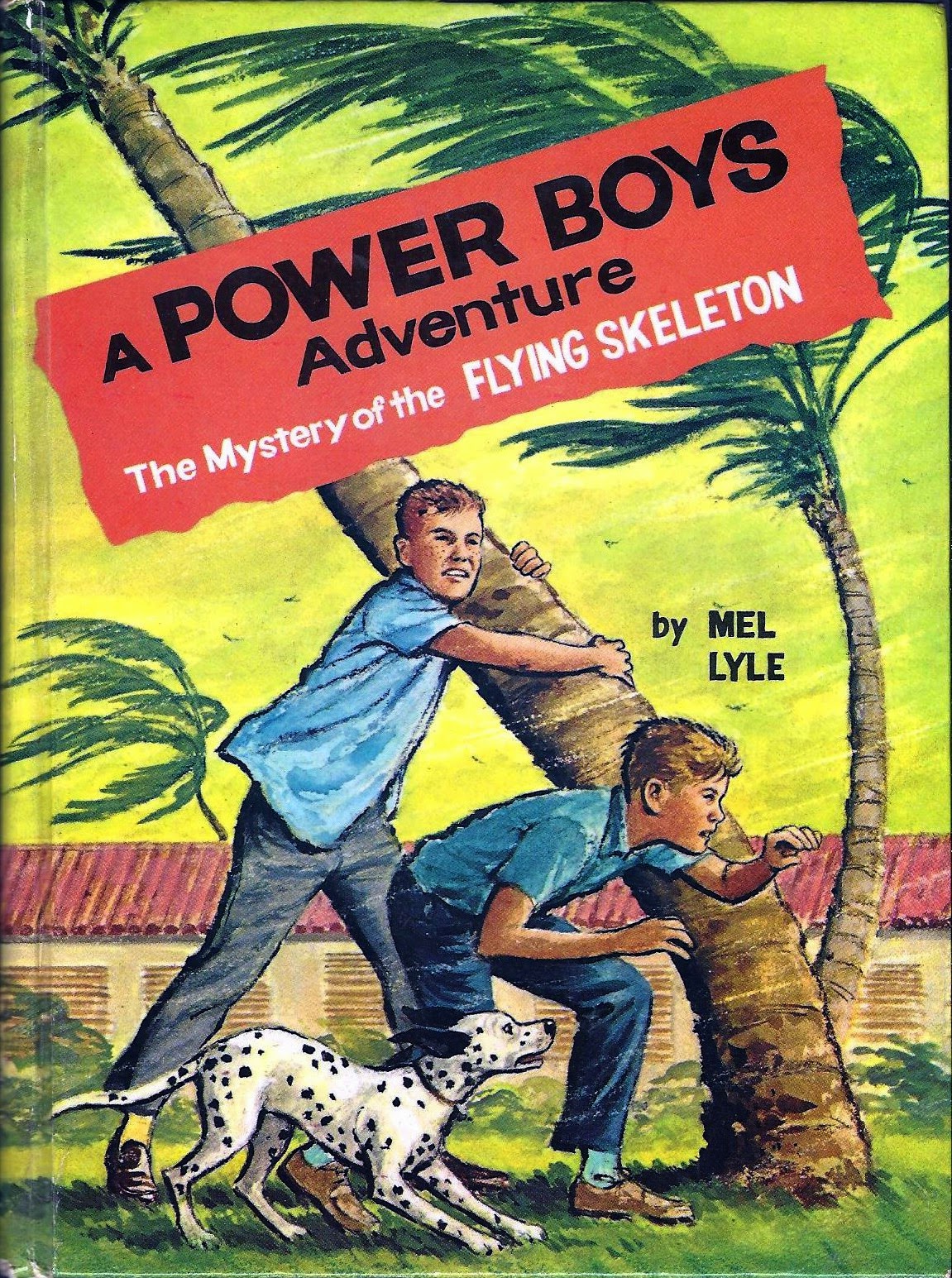 The Power Boys were a Hardy Boys style knock-off series from Whitman Books commencing in 1964. The series only lasted six books. The author, Mel Lyle, is undoubtedly a pseudonym. The actual author’s name is unknown. I was a big fan of the Hardy Boys and the 1960s was really their golden age with old books rewritten and re-packaged and new titles appearing constantly. The Power Boys were great but short-lived. I suppose if I had to pick a favorite of the series it would be The Mystery of the Flying Skeleton because I read it first. Brothers Jack and Chip Power and their Dalmatian Blaze get involved in a nasty piece of business in route to Key West with their father, Thomas Power. At the airport a plane explodes; the nefarious deed had been intended to kill some international delegates. As the plot unfolds they make some new friends as a hurricane begins wending its way toward the keys. Snooping out clues in a happy-go-lucky style is what Chip and Jack do best, all with the loyal pup Blaze fast on their heels. This is popcorn juvenile action fun, 60s style, from that bygone age when “Young Adult” books were mass-produced like B-movies and equally as fun for its tender audience. Reading them as a kid, I never felt that Chip and Jack were ever in any danger, but I enjoyed the breezy attitude and fabricated tension. The colorful covers were all presumably by Raymond Burns who also provided interior line drawings for each book. The Drawings were printed in a different color for each title. In The Mystery of the Flying Skeleton the drawings are printed in green. The other titles included The Mystery of the Million Dollar Penny, The Mystery of the Haunted Skyscraper, The Mystery of the Burning Ocean, The Mystery of the Vanishing Lady, and The Mystery of the Double Kidnapping. Copies range from $5.00 to 10.00 dependent on condition.
Posted by Thomas McNulty at 9:34 AM No comments: