Spell of the Witch World by Andre Norton 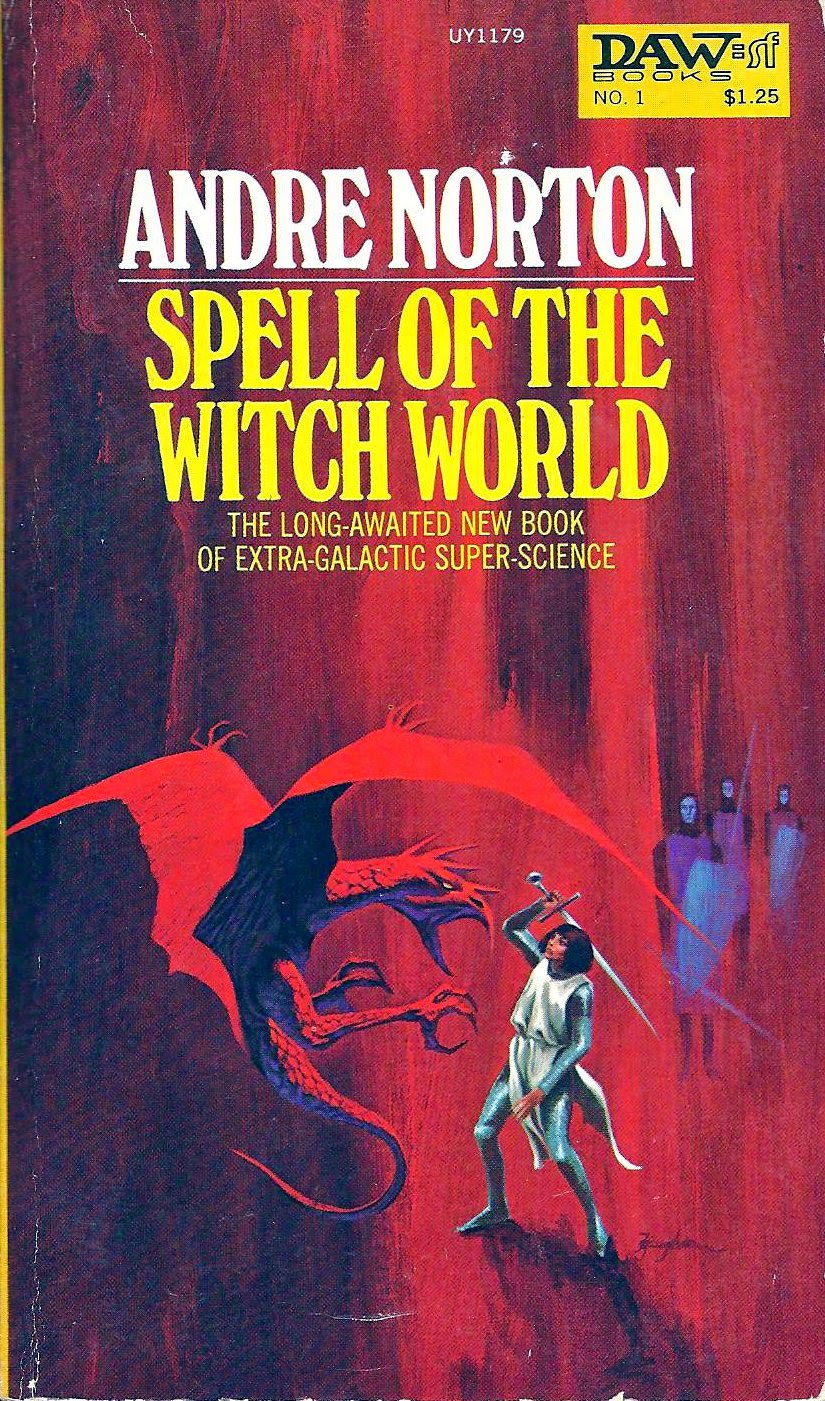 Andre Norton’s famous Witch World series began with Witch World (1963) and continued for many years. Spell of the Witch World (1972) is notable for being the first DAW collector’s book, although it was seventh in the Witch World series. The Witch World books can be read as stand-alone novels although I think you’ll benefit from reading them in the order presented below. Spell of the Witch World is DAW # 1 therefore making it a collector’s item paperback. Copies are easily found on e-bay at wildly divergent prices. Don’t be fooled by false claims: Spell of the Witch World is not a rare book. They printed truckloads and as I mentioned, it’s not hard to find. You should expect to pay no more than $5 to $10 for a solid unblemished copy. I often see it offered for much less. The “High Hallech” entries take place on a different continent in Norton’s immensely popular alternate world fantasy series. I’ve only read the titles listed here. There are others including collaborations with other authors. Spell of the Witch World is pretty good. Norton wrote mythic fantasy as well as anyone could. That’s why I picked up her books when I encountered them. The writing immediately transports you to another time and place. Essentially, three connected stories (the first being the longest): “Dragon Scale Silver,” “Dream Smith” and “Amber Out of Quayth.” Of these, I recommend “Dragon Scale Silver” as the focus, a tale of the Hallech region told by Elys, twin of Elyn, and of their tribulations. Reminiscent of the tales of the brothers Grimm, the three staves of Spell of the Witch World are notable for Norton’s strong prose.

Posted by Thomas McNulty at 9:18 AM No comments:

Journey to the Underground World by Lin Carter 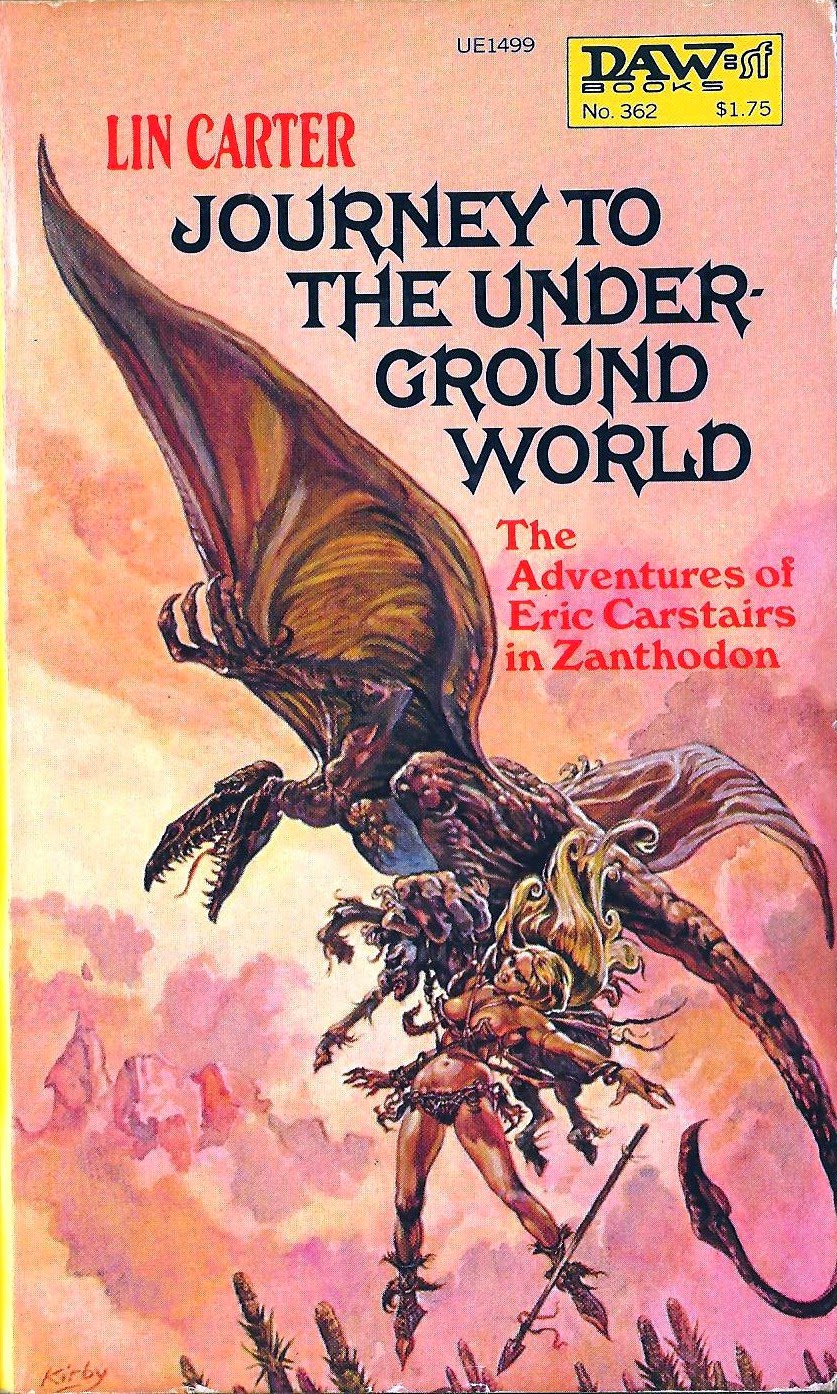 Lost Worlds and Hollow Earth stories have been rendered in pulp by such awesome writers as Jules Verne, H. Rider Haggard, Arthur Conan Doyle, Edgar Rice Burroughs, Abraham Merritt, and many others. Some of these tales are famous, while others are nearly forgotten. Earle Stanley Gardner, the creator of Perry Mason, wrote a superb story titled Rain Magic that owes as much to Doyle and Burroughs as anything that Lin Carter published. Doyle’s The Lost World and both The Land that Time Forgot and At the Earth’s Core by Burroughs join Journey to the Center of the Earth by Jules Verne as the best of that crowded bookshelf. Lin Carter grew up reading and admiring these authors so there is no mistaking the similarities to those writers from pulp’s golden age. Many of Carter’s novels are pastiches of these writers, yet still original and entertaining. I’ve not read every book that Lin Carter wrote, but I’ve read enough to know that I enjoyed them. Journey to the Underground World was published in 1979 and it’s exactly what it appears to be. This is Verne, Doyle and Burroughs reborn during a period when the public demand for exciting pulp style novels was at an all time high. For collectors, this is DAW # 362, when they still used the yellow logo and yellow spine. Eric Carstairs and Professor Potter delve beneath the earth’s surface to the fabled land of Zanthodon where dinosaurs and cavemen rule the land. Told in six sections split into 24 chapters, this is a pulp serial for a 1970s era audience. I liked it when I first read it, and I still like it. Chapter titles such as “Land of Monsters,” “The Sea that Time Forgot,” “Captives of the Cavemen,” and “Jungle Murder” all add a pulp flavor to the adventure. The action is plentiful and Carter’s imagination is equal to any of his forebears. Journey to the Underground World is juvenile nonsense that should easily bring back some fond memories.
Posted by Thomas McNulty at 6:50 PM No comments: 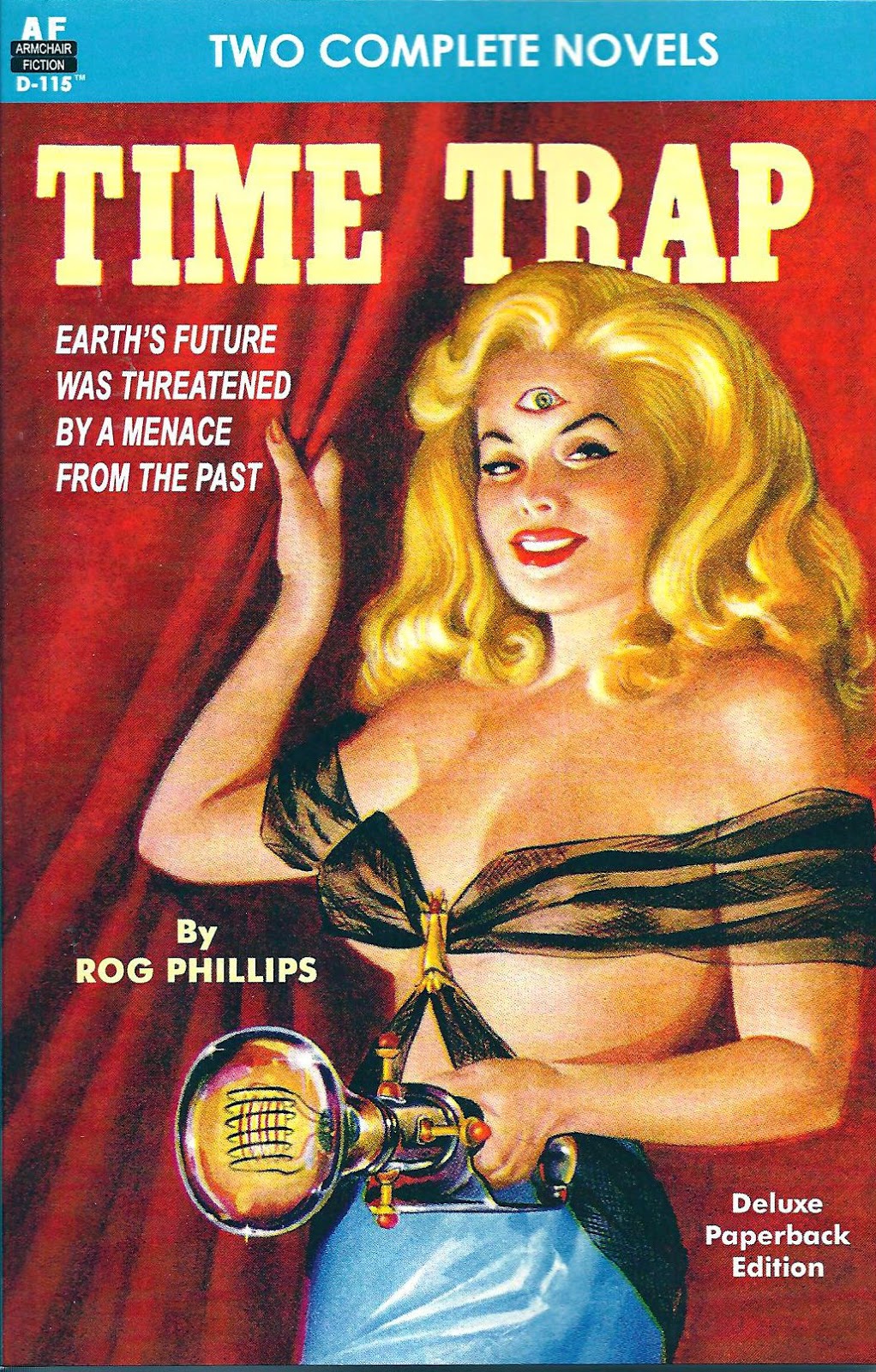 This 1949 pulp story is available again from Armchair Fiction as part of their double-novel reprints along with The Cosmic Destroyer by Alexander Blade. These reprints from Armchair Fiction are an inexpensive way for interested readers to create a golden age science fiction library. Time Trap isn’t a classic, it’s just cornball sci-fi fun. Ray Bradley and Joe Ashford are two scientists who discover a way to call the future using telephone wires and nuclear induction units. They make contact with Nelva, who assists them in their effort to create a time machine. Not content with simply talking with people in the future, Ray and Joe are intent on visiting the future. Their goal is May 19, 1999. Chapter three puts them squarely into the future and into trouble. Nelva, the mysterious voice from the future, had warned them about Varg Thrott, but hadn’t explained who Varg Thrott was. Ray and Joe soon discover that in the future the world is adorned with many large posters of a beautiful blonde with an extra eye in her forehead. She represents Varg Thrott, and they also learn that these posters are actually Vargian spy screens. Thrott is the equivalent of a territorial government, and Varg is what they call themselves, just as we call ourselves Americans. The Queen of the Vargians is, of course, the blonde with the extra eye, Vargia. The Vargians came to earth in flying saucers and conquered mankind. They are not friendly and the future is not such a nice place. Soon, they meet Nelva, a human working as a slave to the Vargians. You get all of this by chapter six. It’s breezy, implausible and ridiculous, but it’s also fun. This is the pulp equivalent to a low budget B-movie with cheesy sets, bad actors and laughable special effects (sort of like Jayne Mansfield in The Loves of Hercules) but you eat your popcorn and enjoy it anyway. The cool cover should be enough to spark your interest, but be careful. Queen Vargia can read your mind.
Click Here to Visit the Armchair Fiction Website
Posted by Thomas McNulty at 1:57 PM No comments: 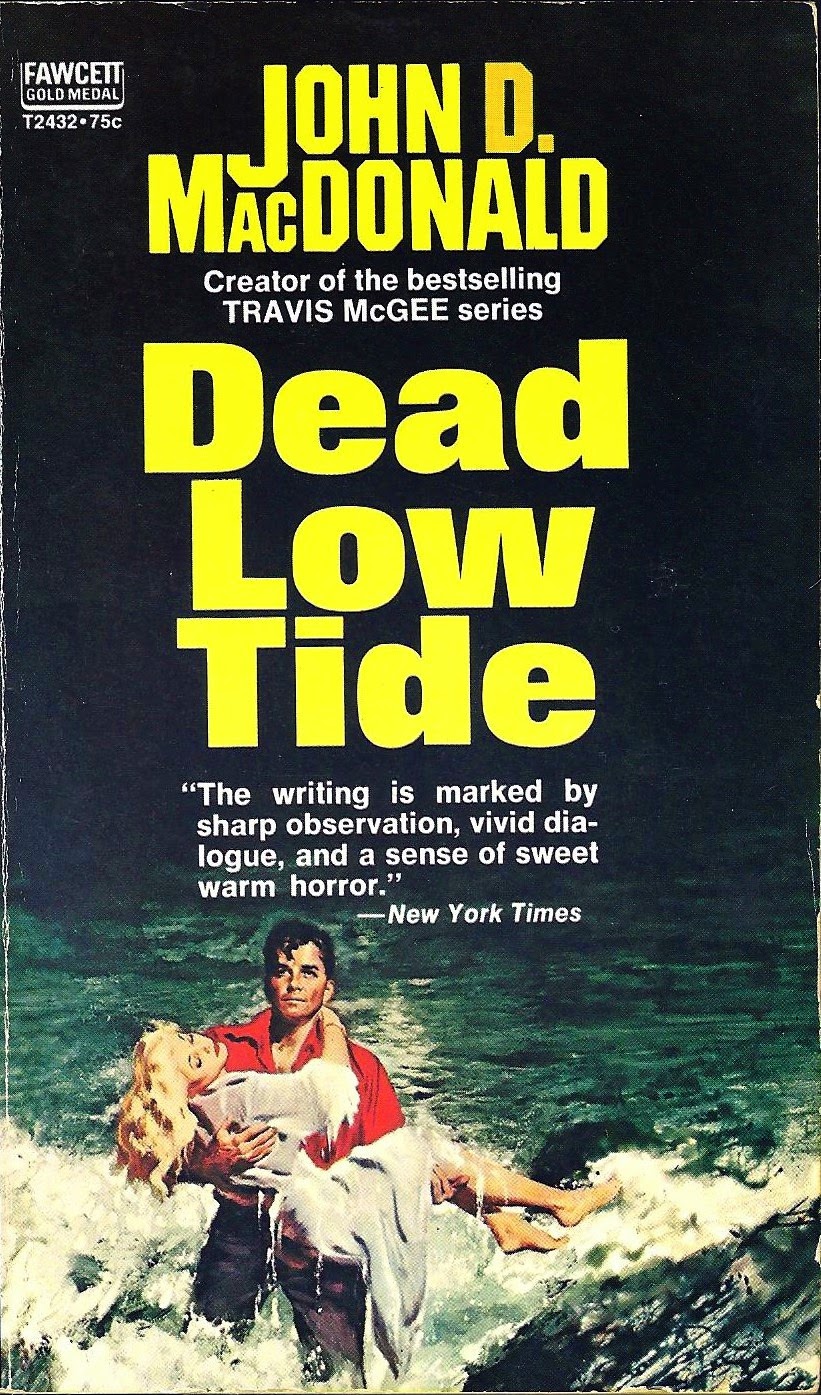 John D. MacDonald wrote dozens of quality thrillers, and while I am a fan of his famous Travis McGee series, it’s those other titles that continue to intrigue me. I’ve never read one that I didn’t like, although I have my favorites such as Dead Low Tide. This awesome thriller is a 1953 Fawcett Gold Medal paperback. I wouldn’t rate it as his best, nor would I put in the classic category, but it’s damn good, and that’s better than a lot of these popular series writers today. I think “damn good” will become an official category going forward on this blog. The set-up here is straightforward – Andrew Hale McClintock is a college graduate working a nowhere job for a Florida construction firm. He has a part-time dish of a girlfriend named Christy. He’s basically got the blues, wondering what the future will hold. He feels that his potential is being wasted. That’s when the boss’s wife asks him to find out what’s bothering her husband.  He figures out the old boy might be dying, and after a confrontation the boss gives Andrew a nice contract that provides for Andrew even if the boss, Mr. Long, isn’t around any longer. Naturally, the boss ends up dead, killed with Andrew’s spear gun that had been stolen from his garage only the night before. The story didn’t quite play out as I expected, which is fine, and I liked that Andrew and Christy’s relationship isn’t window dressing. She serves as an opposite for Andrew who regularly shares ideas with her. It all ties up perhaps too nicely, and you might even call the last paragraph a “happy ending.” But I like MacDonald’s clipped, highly charged prose. He made his name writing these thrillers, and somewhere I even have a pulp magazine with one of his science fiction stories. These great MacDonald thrillers were from that bygone era of paperback writers like Mickey Spillane, Ross MacDonald, Frank Kane and Richard S. Prather. Is there anyone out there now half as good as those guys? Here’s how MacDonald describes the boss’s wife when she comes calling: “It was the first time I’d ever had a good chance to look at her face. Big bright eyes, and just a shade too much in the tooth department, so she had a very faint look of coming out of one of Disney’s woodland dells.” Flourishes like that are sprinkled throughout all of MacDonald’s books. Dead Low Tide offers up proportionate doses of sexual tension, greed, desperation and murder. Dead Low Tide is a pretty damn good page turner.
Posted by Thomas McNulty at 6:41 PM 5 comments: 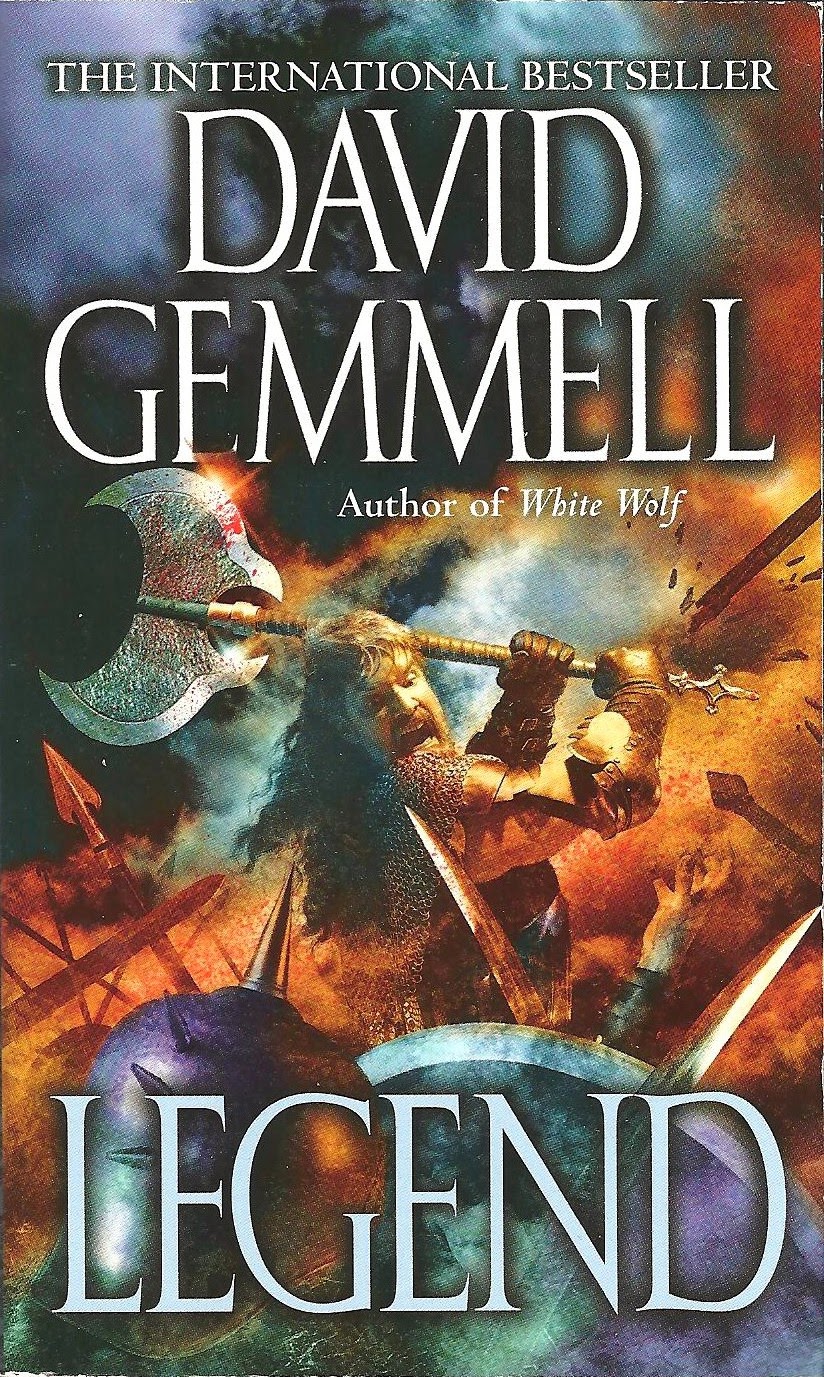 David Gemmell was the best writer of heroic fantasy in our generation. Others have claimed that title, but David Gemmell owned it. He was the king of heroic fantasy, and his untimely death is still a shock. Gemmell was born in 1948 and died in 2006 at the age of 57. Legend was his first major success, and its publication resulted in a staggering amount of high quality novels by Gemmell. I admit to being a Gemmell fan with a long list of favorite Gemmell titles: Ghost King, Echoes of the Great Song, Sword in the Storm, The Swords of Night and Day, Stormrider, Midnight Falcon, Ironhand’s daughter, The Hawk Eternal, Dark Moon, and White Wolf. I typed those titles by glancing up at my bookshelf and this is but a fraction of his work. Gemmell wrote many other novels with so many memorable characters – Druss the captain of the ax, Bane the bastard, Ravenheart, Stormrider, Connavar, and Skilgannon. These characters and the scenes that Gemmell wrote are so vivid that long after I read them I could recall them with clarity. Gemmell was one of a kind. Since Legend was the book that brought him fame, I am celebrating it here with the hope that Gemmell’s many great novels will find a new audience. David Gemmell was a writer whose books will probably remain in print, and that’s good news. Legend is about Druss, the captain of the ax, a legend in his own time. His weapon is the double-sided ax. Druss is coerced from retirement to battle the Nadir Hordes that are descending on the fortress called Dros Delnoch. Legend is about an old warrior’s final battle, and the people that are with him. It is a book with a big heart because Gemmell gave characters like Druss a big heart. It is filled with action and suspense and remains a testament to Gemmell’s incredible imagination.
Posted by Thomas McNulty at 10:57 AM 2 comments: