Coffin for a Cutie by Spike Morelli 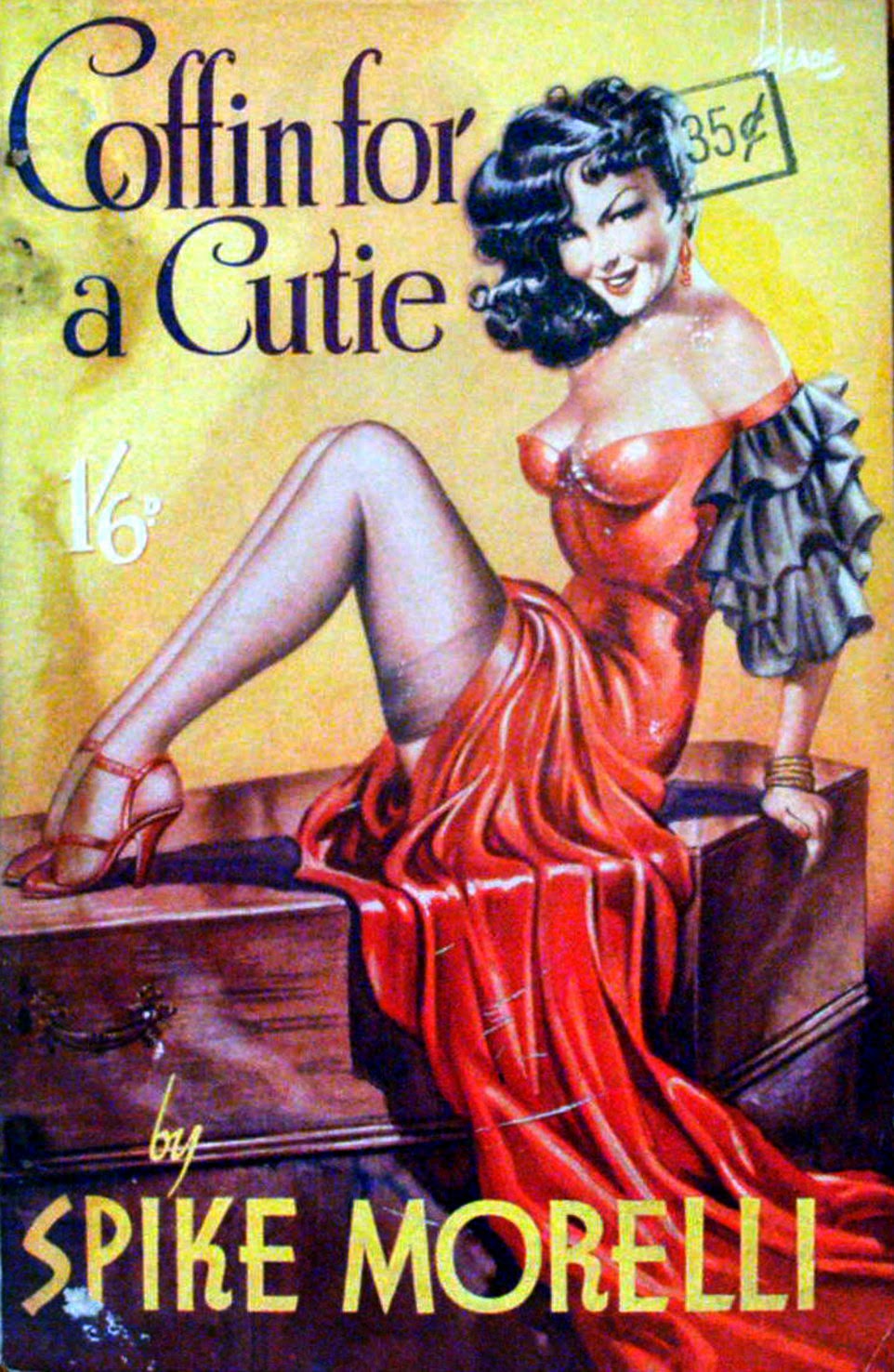 I became acquainted with Spike Morelli’s pulp paperbacks because of the breathtaking  Reginald Heade covers. Coffin for a Cutie is a prime example why pulp magazines and paperbacks have such a devoted audience. I’ve stated before that you can indeed judge a book by its cover. The next point is that, yes, the story is just as good as the cover. That’s not always the case, but it holds true for Reginald Heade’s covers of these Archer Press paperbacks. Spike Morelli wrote lurid, gritty tales. Coffin for a Cutie dates from 1950. I know nothing about Spike Morelli except that the Fantastic Fiction website lists his pseudonyms as Francis Donaldson, Gilroy Mitcham, Macdonald Newton and Gene Ross. As for Reginald Heade, his Archer Press titles are all prized by collectors, and best of all they are neither difficult to find nor especially expensive. You can expect to pay $15 to $30 for solid copies. Coffin for a Cutie is not great literature, but it’s great pulp fun. This fellow Sam Case was raised in a Georgia swamp and is about as dangerous as a rusty razorblade in the wrong hands. That means he’s lethal and nasty. Coffin for a Cutie is “politically incorrect” by today’s standards. This is a pulp paperback and not a treatise on race relations or women’s rights. Sam and his black friend Will steal some money from people swimming in a creek and then are forced to leave town, but not before Sam has his first experience with a girl named Sanny. They flee to Atlanta, where they meet various people, including a pornographer named Mitchin who likes taking photos of naked girls. Sam hooks up with a dame named Babs, and things get complicated and sleazy. There’s a place called the Voodoo Club where girls dance naked, some double-crosses, another dame named Inga, and more murder and duplicity. Sam treats women a little rough, as in using his fists on them to get what he wants. There are no heroes in Coffin for a Cutie. This book is one long list of bad choices leading to vice, theft and murder. Fun to read, but don’t go looking for a happy ending.
Posted by Thomas McNulty at 4:37 PM 5 comments:

To Ride the River With by William MacLeod Raine 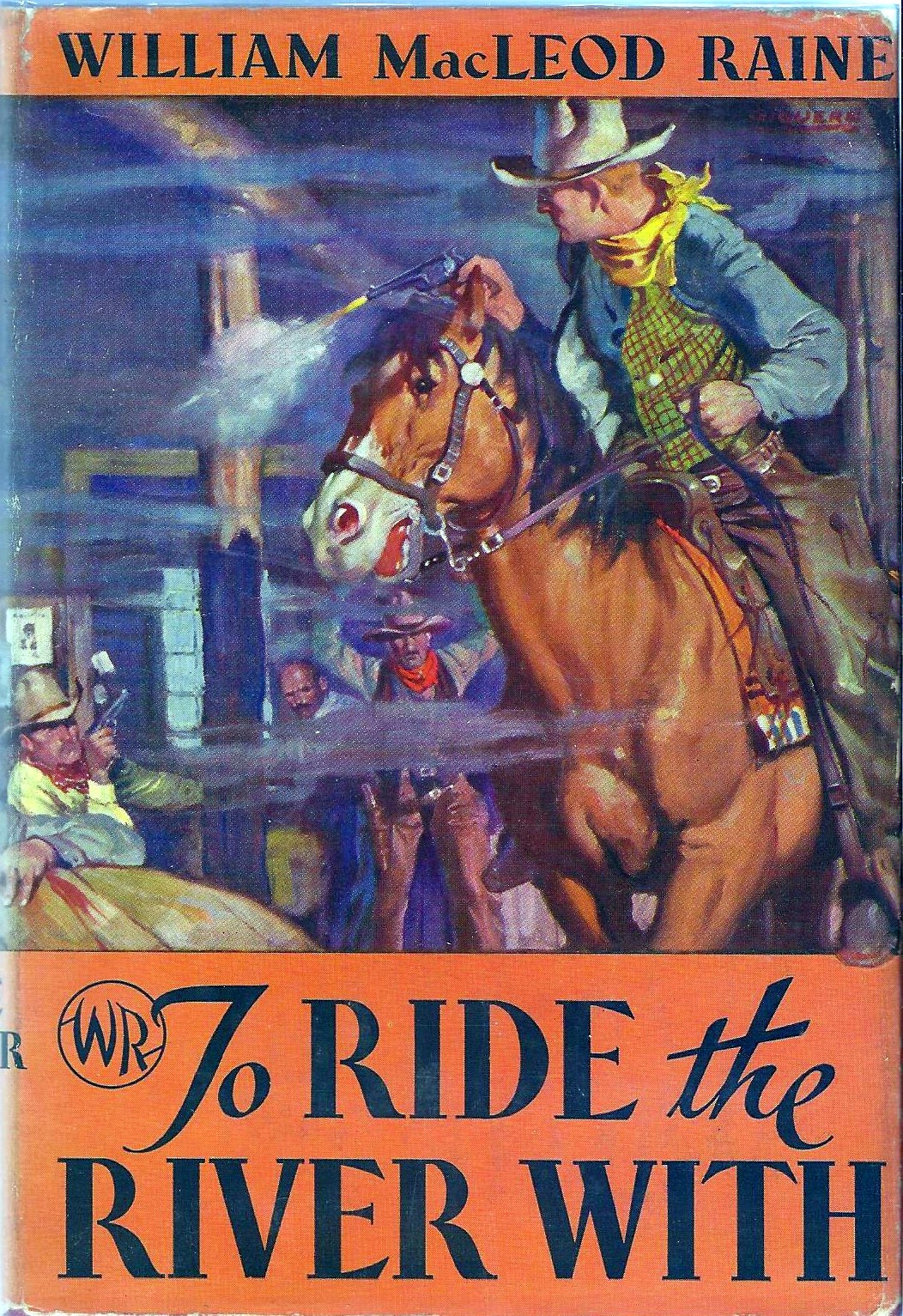 To Ride the River With is a forgotten book by a forgotten author. William MacLeod Raine (1871-1954) was born in London and grew up on a cattle ranch in Texas. His youthful experiences in the west certainly had an influence on the many western stories he would write. He began publishing prior to World War I, and by the mid-1930s he was nearly as popular as Zane Grey. To Ride the River With was published in hardcover in 1936 by Grosset & Dunlap. The back cover advertises 23 of William MacLeod Raine’s “dashing novels of frontier life.” When Raine died in 1954 many of these books had been reprinted in paperback. I encountered these paperbacks much later, and so was introduced to him through such paperbacks as Gun Showdown and Texas Breed. I bought these paperbacks simply because I liked the covers. The fact that the stories were good was a bonus. In old cowboy lingo, “a man to ride the river with” was a man to be trusted in a pinch. In MacLeod’s novel, Jeff Gray is such a man, although he needs to prove himself amidst ambushes, kidnapping and murder. Raine’s writing is truculent, the characters believable. He is cut from the same cloth as Zane Grey, although without the poetic descriptions of nature that Zane Grey was so good at. Many of William MacLeod Raine’s books are available on Kindle, but for my money it’s a lot more fun tracking down both the originals and paperback copies. 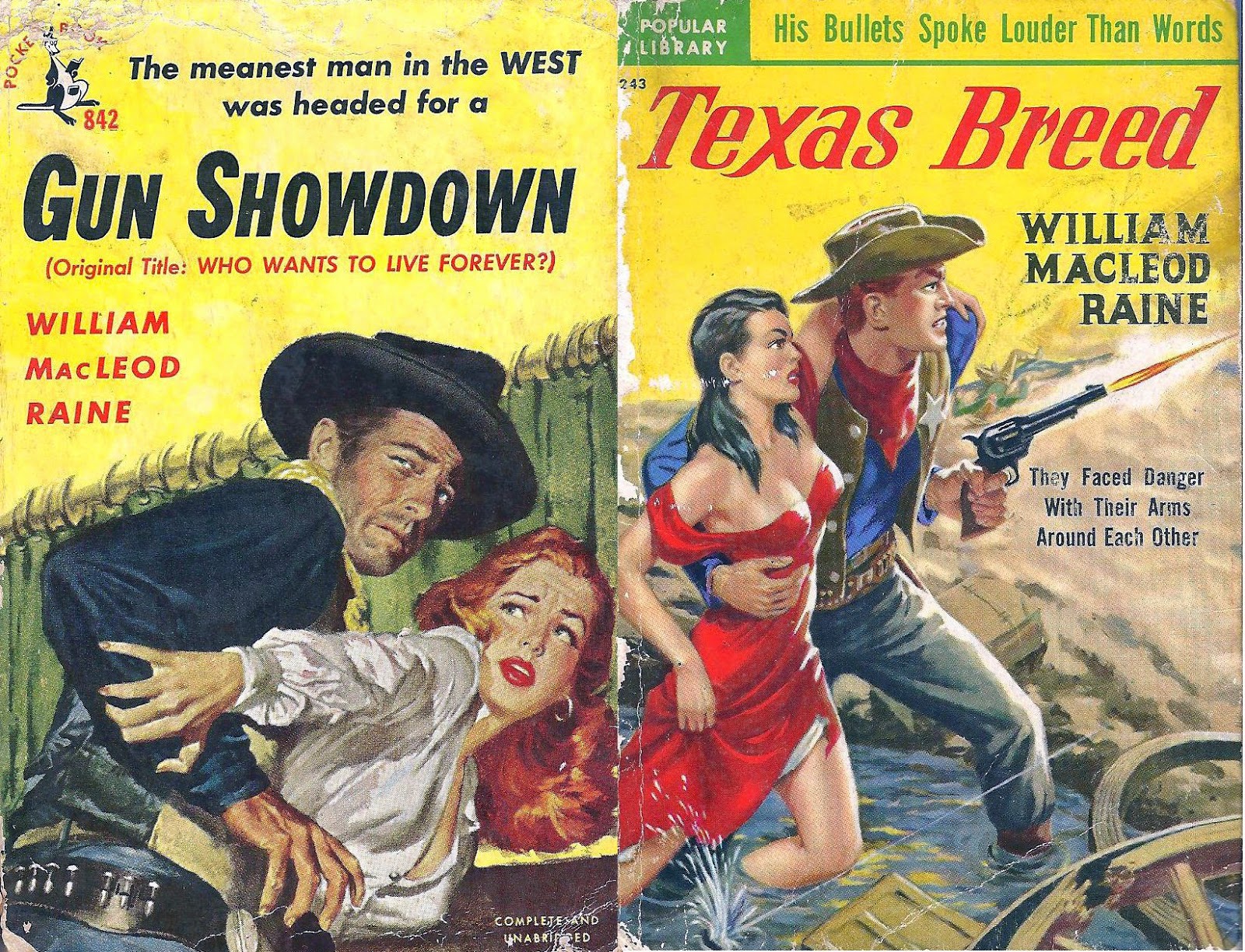 Posted by Thomas McNulty at 7:08 AM 2 comments:

Email ThisBlogThis!Share to TwitterShare to FacebookShare to Pinterest
Labels: To Ride the River With, Westerns, William MacLeod Raine 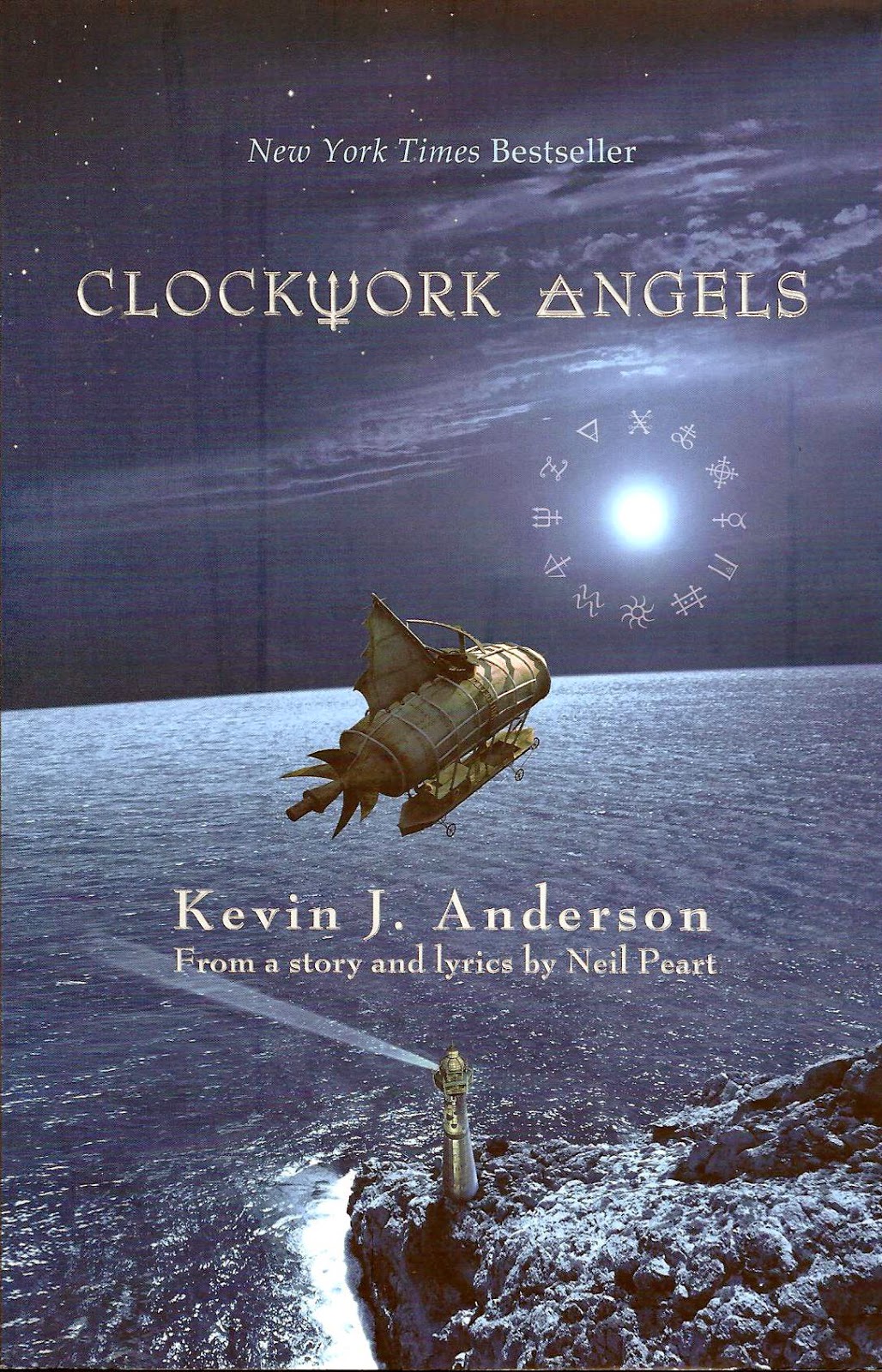 Prior to reading Clockwork Angels I would have rated Kevin J. Anderson’s outstanding Terra Incognita trilogy as his best work. Kevin has published many superb novels, and while I love them all, I really clicked with the Terra Incognita books. In fact, I had Kevin sign all three of my copies when I met him a few years ago. But Clockwork Angels is a special book. A stand alone novel based upon and inspired by Neil Peart’s lyrics for the Rush album of the same name, Clockwork Angels is a dazzling coming of age story. Part fantasy, part science fiction and part Steampunk, Clockwork Angels tells the story of young Owen Hardy who yearns to see more of the world. He does just that, and soon he discovers that his world isn’t what it seems, and his adventures test his endurance and willpower. He finds himself pulled between the forces of order and chaos. Learning to survive on his own, Owen falls in love, travels to remote parts of the world, and experience extreme loneliness and extraordinary adventures. Bibliophiles take note: the paperback edition from ECW Press in Canada includes stunning cover and interior images designed by Hugh Syme thus making this a real collector’s item. Neil Peart’s lyrics are included along with an essay by Peart on the book’s origin. Kevin J. Anderson has crafted a wholly original and heartfelt story that will touch readers of all ages. I really loved this book and I’m rating it a modern classic alongside Neil Gaiman’s Neverwhere. This is one you won’t want to miss. The Anarchist, the Watchmaker, Francesca, Cesar Magnusson and his carnival extravaganza, Commodore Pangloss, the seven cities of gold and other characters and places are all waiting to be discovered in the pages of this wonderful book.
Posted by Thomas McNulty at 6:57 PM No comments: 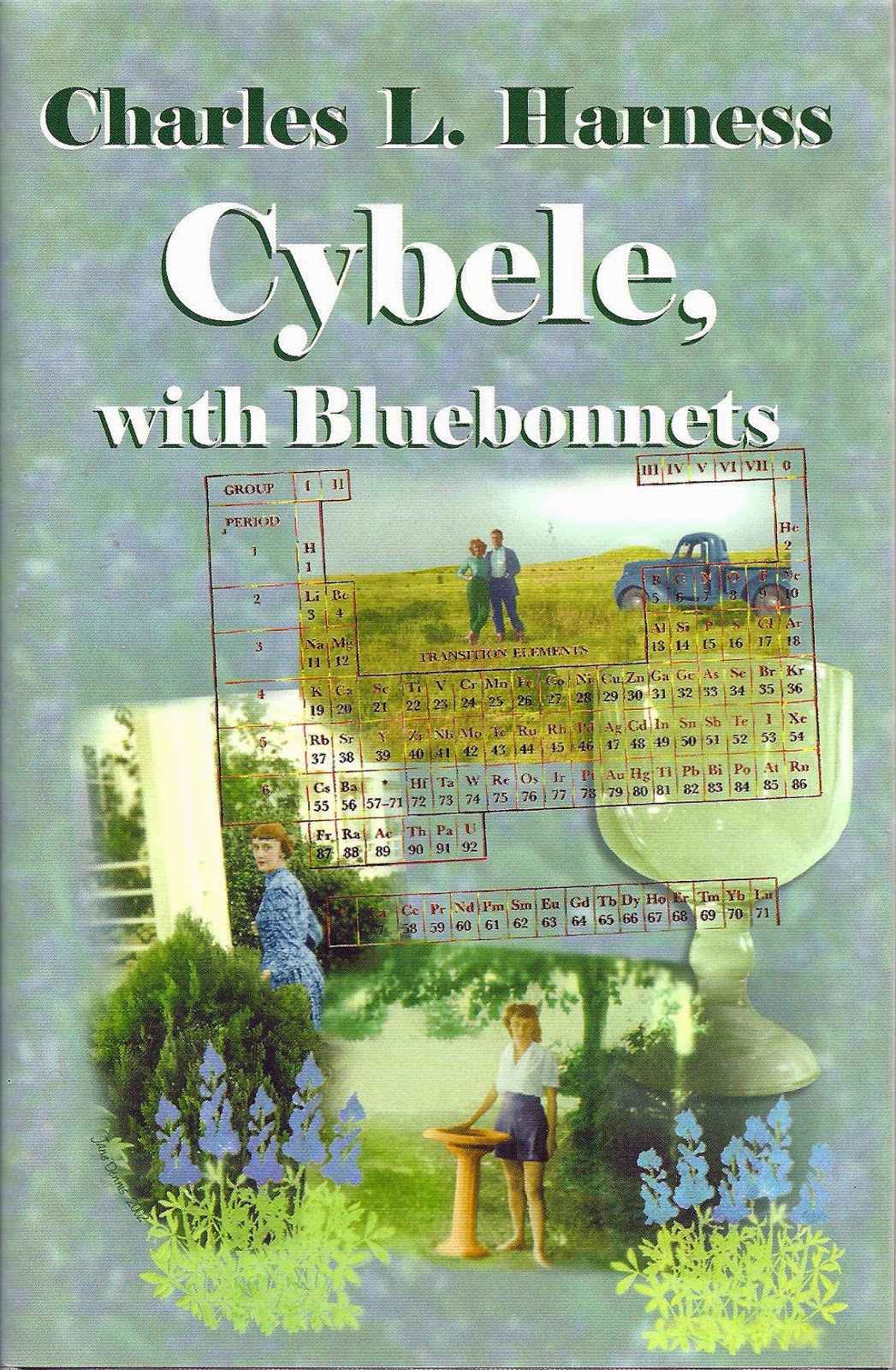 Charles L. Harness wrote a great many novels, novellas and stories during his long career. He is best known as the author of The Rose, a short but intriguing science fantasy novel. I have always enjoyed everything he wrote, but his last book, Cybele, With Bluebonnets, is my favorite of his stories. This was his last novel, published in July 2002. Cybele, With Bluebonnets can be categorized in many ways, and all of them are correct. It is science fiction, a love story, a ghost story, a memoir of a lost boyhood, and a rumination on the human condition. It shares certain themes with Harness’ earlier novel, The Paradox Men, and the book’s introduction by George Zebrowski illuminates some of these connections. Cybele, With Bluebonnets is not a traditional science fiction novel at all, although Harness wrote many such stories in the past. It is also not the type of book that gets the attention of committees from various organizations that hand out awards. Cybele, With Bluebonnets was published with little fanfare by NESFA Press out of Framingham, MA. The story begins in West Texas during the Great Depression. It tells the tale of young Joe Barnes who falls in love with his High School chemistry teacher, Cybele Wilson. There is tragedy here, dashes of chemical instruction, and hope and certainly a great deal of love. How this all ties together, and the strange but poignant conclusion will leave you grateful for the journey. It occasionally happens that a rare book comes along such as this one that rises above the genre for which it was intended and becomes that which is simply Literature, and any other labels are an injustice. Cybele, With Bluebonnets is a literary tale, told by a pro, and offered as one last tale by a great writer from the golden age.
Posted by Thomas McNulty at 9:53 AM No comments:

The Moving Target by Ross MacDonald 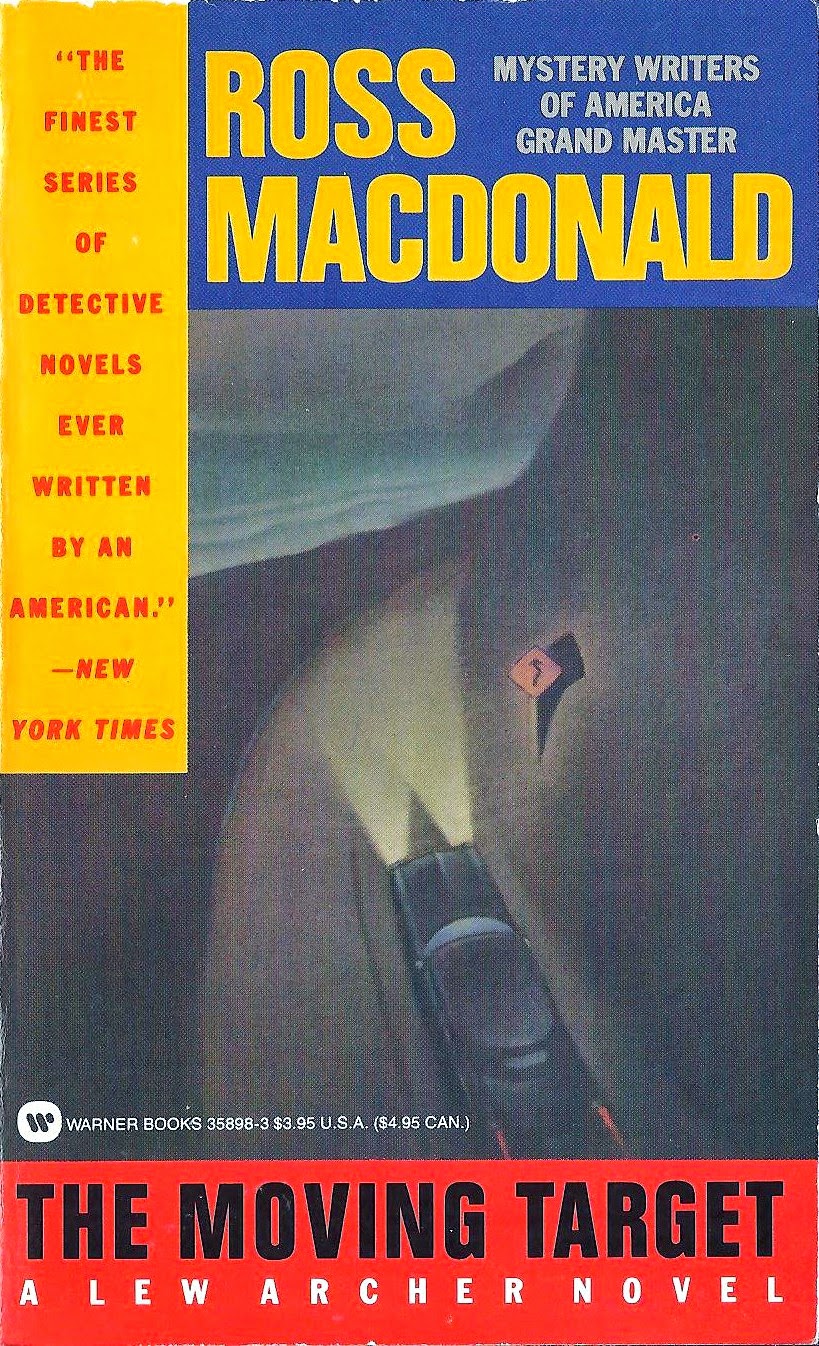 Published in 1949, The Moving Target was Ross MacDonald’s first Lew Archer novel. Reportedly, MacDonald (whose real name was Kenneth Millar) was inspired by Dashiell Hammett’s The Maltese Falcon and gave his character the name of Sam Spade’s partner from that famous pulp novel. The Moving Target is best known as the book that inspired the film Harper (1966) starring Paul Newman (Archer was changed to Harper). As you would expect, there are major differences between the book and the film. I love both, so the differences have never been a point of contention with me. Raymond Chandler’s output had diminished by 1949, and MacDonald’s books found a ready audience for the next forty or so years. Lew Archer was the successor to Chandler’s Philip Marlowe and Hammett’s Sam Spade. Archer was “New School” while Marlowe and Spade were “Old School.” Those differences are primarily found in the culture these characters inhabited. Keep in mind, this is post war America, which is made clear by MacDonald in chapter 15 where he writes: “In a 1946 car, with a late-model girl beside me, I could still imagine we were crossing the watershed between Colton’s atomic age and the age of stone when men stood up on their hind legs and began to count time by the sun.” In all of MacDonald’s books the villain’s are often corrupted by greed. Archer moves in affluent circles in Los Angeles and surrounding area. His clients have money, and they know what power comes from money. The plot for The Moving Target is simplistic (blackmail), a lesson here for writers looking to complicate their plots with a perceived clever yet labyrinthine series of twists. Simple works fine when the prose is as sharp as this. Ultimately, it is Ross MacDonald’s strong writing that holds everything together. His scenes are fully realized, his characters well-developed and the dialogue realistic. In some ways I see MacDonald as the last of the great detective novelists. This is not minimalist writing at all. Vivid and suspenseful, The Moving Target and its hero Lew Archer are impossible to dislike. 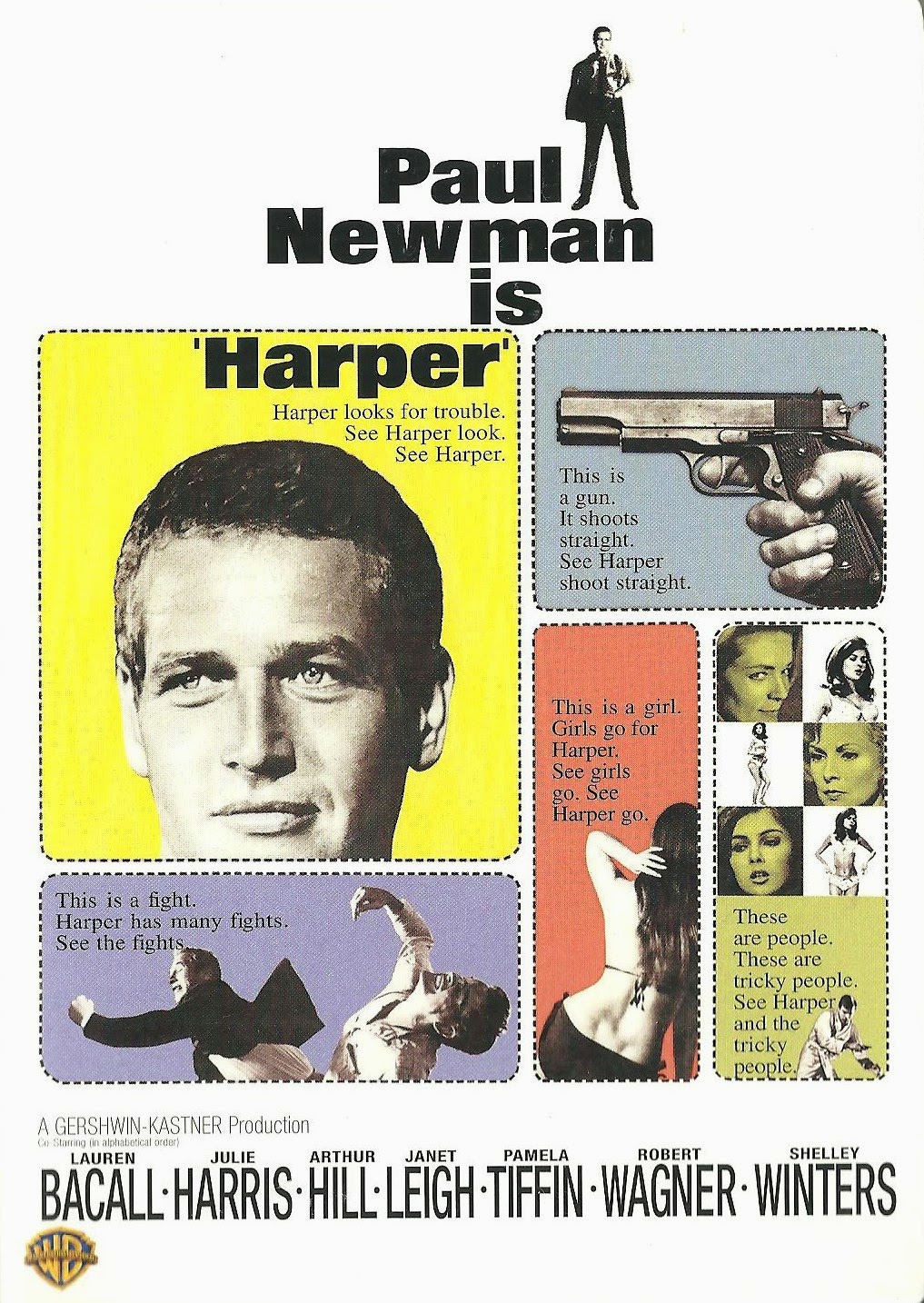 The film version was released in 1966, smack-dab in the middle of the 60s counter-culture movement. Harper is just as much a reflection of the 60s as The Moving Target was a reflection of late 40s post-war America. Harper, of course, forever belongs a part of Paul Newman’s so-called “H period” of films alongside The Hustler (1961), Hud (1963), and Hombre (1967). The cast included Lauren Bacall, Julie Harris, Janet Leigh, Pamela Tiffin, Robert Wagner and Shelley Winters. Directed by Jack Smight, the screenplay was by William Goldman, best known for his screenplay for Butch Cassidy and the Sundance Kid; and cinematography by Conrad Hall who also filmed Butch Cassidy and the Sundance Kid. These connections were relevant to me in 2002 when I met Newman and Hall during the Road to Perdition press junket in Chicago. Harper is among my favorite Paul Newman films and it certainly rates among my favorite 60s films (I would have to put Harper next to Bullet with Steve McQueen as two classic 60s films). Newman plays Lew Harper as a man of his era, and not as a dinosaur from the 40s. The choices were correct because the film was set in present day Los Angeles. Paul Newman and author Ross MacDonald both had a modest reunion of sorts in the 1975 film version of The Drowning Pool, MacDonald’s second Lew Archer novel and published in 1950. That film was good, but the book was much better. Today, Ross MacDonald is given scant attention. That’s a shame because he was such a fine writer, and his early Archer novels are among the best of their kind. 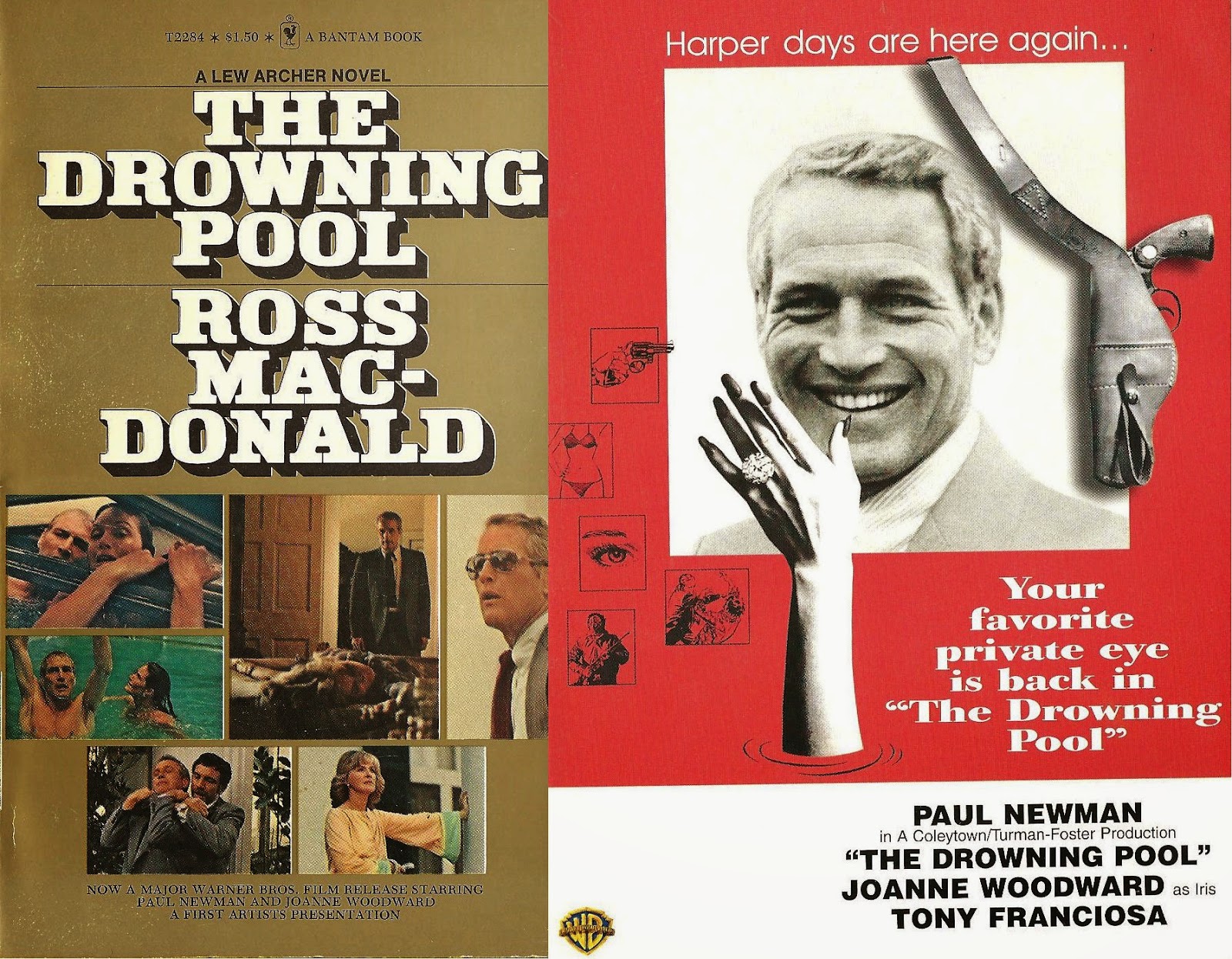