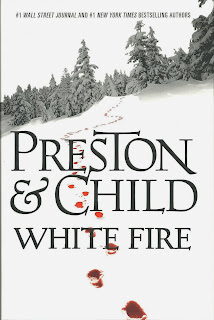 In a previous post I mentioned that FBI Special Agent Aloysius Pendergast ranks among literature’s greatest detectives, and I linked him to Sherlock Holmes, Sam Spade, Philip Marlowe and others. Now, with the publication of White Fire, authors Douglas Preston and Lincoln Child have actually linked Pendergast directly with Holmes in a story that left me breathless. Keep in mind that ALL of Preston & Child’s Pendergast novels leave me breathless. With White Fire, Pendergast’s young friend, Corrie Swanson, takes center stage for the first time as she pursues a college education in a story that leads her – or Pendergast – to a lost Sherlock Holmes story by Arthur Conan Doyle. That story is included in the text, so readers get a double treat here. Pendergast and Holmes have a lot in common, and now I’m wondering if those similarities weren’t intentional. Authors Lincoln Child and Douglas Preston know their literature, and they certainly know Holmes. Corrie Swanson discovers some tantalizing clues in a series of deaths 150 years earlier, all of which has great relevance today. There are the requisite nasty villians, some twists and turns and loads of suspense. After the incredible events of what is being called “The Helen Trilogy,” which consists of Two Graves, Cold Vengeance and Fever Dream, I was curious has to how the series might continue. White Fire does NOT answer that question, and I view the book as more of an interlude. There are but the briefest references to previous events in White Fire, so readers interested in learning the status of Pendergast’s two sons (one good, one evil), and his relationships with Constance Green and other longstanding characters will have to wait. The good news is that we are introduced to a fascinating new character, Captain Stacy Bowdree, USAF. White Fire is a taut, suspenseful book and a fine addition to the Pendergast canon. With Aloysius Pendergast, authors Lincoln Child and Douglas Preston have created a literary character that will stand the test of time. People will be reading the Pendergast novels in one hundred years, just as we are reading the Sherlock Holmes novels today. This is literary history in the making.

Posted by Thomas McNulty at 4:55 PM