Cult of the Witch Queen by Richard S. Shaver 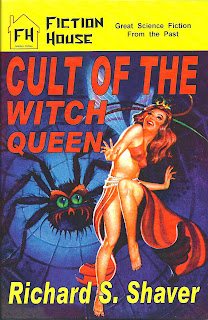 Richard S. Shaver was never a great writer, but there is enough entertaining nonsense in his pulp fiction to make his stories interesting. Some of his stories are better than others, but more often the plots and ideas he presented were far more interesting than the stories themselves. It was as if his talent couldn’t rise to the occasion of his ideas. Still, he is entertaining, and there is a lingering interest in his work. Shaver is best known because “The Shaver Mystery,” a series of science fiction tales published in Amazing Stories in the late 1940s. Shaver claimed his stories were autobiographical and that an advanced civilization lived in large caverns deep below the earth’s surface. Editor and publisher Ray Palmer exploited Shaver’s stories, going so far as to state he agreed with Shaver’s claims. Shaver stated that Deros, the people living in the caverns, had held him captive for several years and that his stories were but thinly disguised accounts of his own adventures. Although the Hollow Earth theory was far from original (Edgar Rice Burroughs did much better with it in his Pellucidar stories), Shaver’s fiction became popular and helped increase sales of Amazing Stories. In fact, “Shaver Mystery Clubs” were fashionable activities for young readers and fans. In later years, Shaver asserted that certain rocks contained the remnants of an ancient language. One thing is certain - Richard S. Shaver had a wild imagination.

Cult of the Witch Queen was originally published in the August 1946 issue of Amazing Stories. It features all of those elements that made his stories popular. Big Jim gets hoodwinked into servitude in the caverns beneath the earth. Held captive by The Watchers, he falls for a Venusian named Ceulna who tells Jim about The Limping Hag, the vampire queen who is breeding Venusians for their children’s blood. Jim himself is slated for a trip to Venus to help defeat the Venusian rebels at war with the Witch Queen. The Rulers want Jim to become a soldier for them. Jim has to be careful because sometimes The Watchers can read his mind. The Venusians held captive on earth are naturally quite beautiful, and Jim brews up a plan to stow Ceulna on the spaceship so they might reconnoiter on Venus and somehow set her and her people free. Out in space, Jim learns that the followers of the Witch Queen are the remnants of the cult of Hecate, an offshoot of the Rosicrucians. And then it gets a lot weirder. Shaver even throws in footnotes relating to mineralogy and other “relevant” historical points. The second half of Cult of the Witch Queen is pure bombastic Space Opera. Once on Venus readers will learn of the Elder Race and you’ll get glimpses of Venus including the tree city of Lefern. Armies at war, Venusian political intrigue and even Ray Guns come into play in this wacky but entertaining tale.

Cult of the Witch Queen is but one of Shaver’s stories available as reprints. This edition from Fiction House and Pulpville Press reproduces the original cover from Amazing Stories. Visit www.pulpvillepress.com for additional information, and watch this blog more reviews of Shaver’s fiction.
Posted by Thomas McNulty at 9:02 AM