The Old Wolves by Peter Brandvold 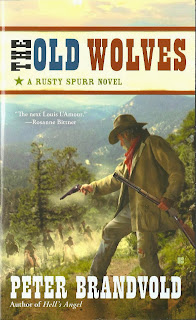 The Old Wolves is Peter Brandvold’s best book. Now a statement like that requires some explaining. The first Brandvold book I read was .45-Caliber Revenge, a Cuno Massey story. I was hooked and tried to play catch-up, so I bought all of his Lou Prophet Bounty Hunter books, The Ben Stillman series and the Rogue Lawman series. I still don’t have them all, but I have a lot. He also publishes under the pseudonym Frank Leslie. The problem is, Brandvold is prolific. Normally being a prolific writer doesn’t mean much, except Brandvold is good, and that makes all the difference. Peter Brandvold deserves my attention and my highly sought after budget dollars. All of his books have the epic scope and passion of a Jack London novel with a dash of Zane Grey’s love of the land. That’s a winning combination. The Old Wolves follows Deputy United States Marshal Spurr Morgan in the twilight of his life as he takes on one last job. It all goes to hell and Spurr finds himself  co-joined with a soiled dove named Greta, and together they set out to avenge a beating they took from some real bad-asses. The book is great fun, and Brandvold even tones down some of the sex in this one. By the way, I call the sex in his books “The Brandvold Effect” because he includes it without slowing down the story. No easy trick. So why is this his best book? The Old Wolves is Peter Brandvold’s best book because it’s the newest one I’ve read. Naturally, the next one will be just as good if not better. Like I said, he’s prolific and he’s good. In fact, I think there’s already a sequel to The Old Wolves on the market, which means my budget is blown. I may have to get a part time job. Kudos, Pete.
Posted by Thomas McNulty at 1:12 PM